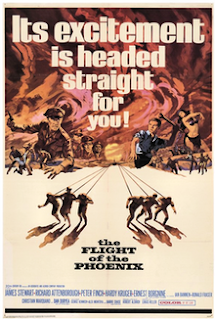 Every so often you watch a film and say “where have you been my whole life!”. That’s the case with The Flight of the Phoenix– I can’t even imagine how much I would have loved this film if I had seen it when I was younger. This one has got it all for fans of anything from disaster movies to personality clashes. Aldrich’s film is a Sunday afternoon classic with bite, a brilliantly constructed actors’ piece set in the claustrophobic confines of the only shelter for miles around in the Gobi Desert.

Frank Towns (James Stewart) and Lew Moran (Richard Attenborough) are the pilot and navigator on a cargo plane flying to Benghazi, with several passengers. Caught in a sandstorm, the plane crashes in the desert over 100 miles off course. The chances of being located are small and the survivors have only enough water for a little under a fortnight, so long as they avoid exertion. While Towns quietly struggles with the guilt, and different (hopeless) solutions are suggested, German aeronautical engineer Heinrich Dorfman (Hardy Krüger) believes that they can build a new airplane from the wreckage to fly themselves to safety. Towns and Dorfman are incompatible people, leaving Moran to play peacemaker and to support the building of the new aeroplane which may be (as Towns believes) a forlorn hope in any case.

Amazingly the film was a box-office flop on release – but time rewards skill, because you watch the film and marvel at the economy of its storytelling, its expert direction, wonderful acting and fantastically drawn characters. It’s a film of immense tension, with nearly all of this coming from the bubbling potential for deadly clashes between the trapped men. The rest is supplied by the ever-present threat of diminishing resources – none more so than the limited supply of cartridges needed to start the new plane’s engine (they’ve got seven and, best case, need at least five).

It’s this grim awareness of the knife-edge everyone is living on that powers the film. Every single resource is precious, and the pressure and fatigue show in every scene. As the film progresses, each of the men slowly disintegrates, growing increasingly scruffy, unshaven, dry skinned and weak and more and more susceptible to anger. Aldrich charts all this with professional excellence, the editing skilfully cutting away at several points to reaction shots from the actors as feuds come to a head, helped by some gloriously subtle and intelligent acting. 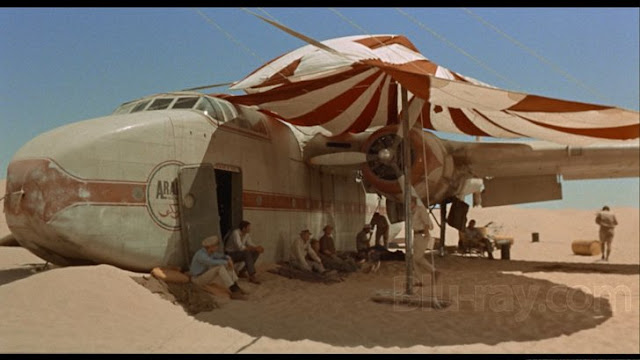 And it’s not surprising really – few films capture the grim pressure of the desert better than this. Sand dries out skin and throats, reflecting the beating heat of the sun everywhere. The clear sky and burning sun turn every surface into smouldering heat – even the shade offers little respite. The viewer is left with no doubt about the insanity of spending time out of the shade in these conditions. You know immediately Captain Harris’ plan to walk 500 miles over the desert with a single canteen of water is absurd (it doesn’t end well of course). It’s a beautifully shot film that makes the mystical glamour of the desert beautiful and terrifying.

One of the things I like best about the film is that it is almost impossible to predict who will come out alive and who won’t. Unlike most Hollywood films, characters are not punished for deviating from goodness and purity – some of the most noble characters don’t come out alive, while some of the most self-serving, selfish and cowardly ones do. Even the central heroes are flawed: Towns is struggling with depression and a near crippling guilt that almost leave him fatalistically accepting death; Moran is a drunk possibly to blame for the whole disaster; Dorfman is arrogant, difficult, prickly and in many ways flat out unlikeable.

Ah yes, Dorfmann. What a superb performance from Krüger (the first actor cast). In a masterstroke of invention, the character was changed from British (in the novel) to German. This opens up a whole world of additional prejudice between Dorfmann and the other passengers. “What did you do during the war?” antagonistic joker Ratbags asks Dorfman pointedly. It’s a tension that underlies most of the clashes. Dorfmann doesn’t help with his almost complete lack of awareness of social etiquette and his Germanic insistence on probabilities of survival: he sees no problem with treating the rest of the survivors like staff, openly debates the wisdom of helping the critically wounded, refuses to explain his thinking until absolutely pressed and has no empathy for their flagging strength and morale. But he also has a strange naivety which plays into a late plot reveal hinging on Dorfmann’s inability to read the reactions of the people sitting next to him. The film and Krüger flirt brilliantly with Germanic stereotypes – is there a more “German” character in film than Dorfmann? He’s about as far from a white knight as you can get. 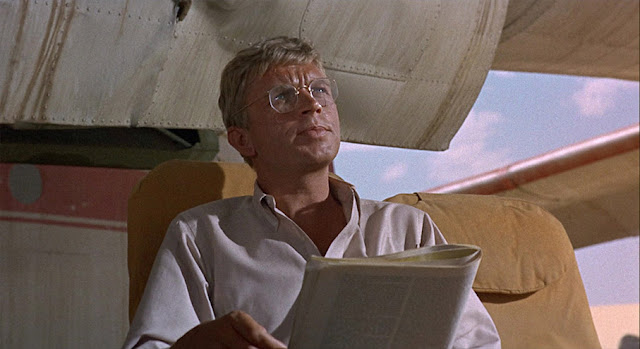 But then so is James Stewart’s Towns. One of the things I like most about the film is the difficult psychology of survival. Towns is clearly struck with a barely understood guilt about the people killed in the crash, and seems ready to fatalistically accept death. His clash with Dorfmann is powered by numerous factors, not least a sense Towns has of his generation being replaced by a younger, technically minded one and a sense of losing control of his destiny. Nevertheless, Towns almost fanatically opposes the project at one point – and basically only accepts it when Moran and Dr Renard (an immensely noble Christian Marquand) tell him it’s better to have a chance of something to live for than to sit around dying. Stewart brilliantly taps into the ambiguity in his screen persona – a decency beneath the surface, but also a psychological weakness, a need for control under the nice-guy persona, a man struggling to accept he is out of his depth. It’s a brilliantly low-key psychological performance of a man struggling to button up guilt, pressure and unease.

The whole cast is superb. Attenborough plays the closest to type as a loyal number 2, but even he is clearly struggling to hold acres of despair while constantly playing peace-maker. Ronald Fraser is exceptional as a career army sergeant tottering on the edge of open-rebellion throughout the film, who betrays his commander’s trust no less than three times and is the most unknown wildcard in the pack. Ian Bannen was Oscar-nominated for his electric performance as a bitter, sarcastic Scots oil-worker who surprises everyone with his hard work while never letting up for a moment his bitter commentary on events. Peter Finch gives an excellent, ram-rod straight, almost naively decent stiff-upper lip performance as Captain Harris, a man a few degrees away from a noble idiot. Ernest Borgnine is touching as an oil foreman suffering from exhaustion and stress. 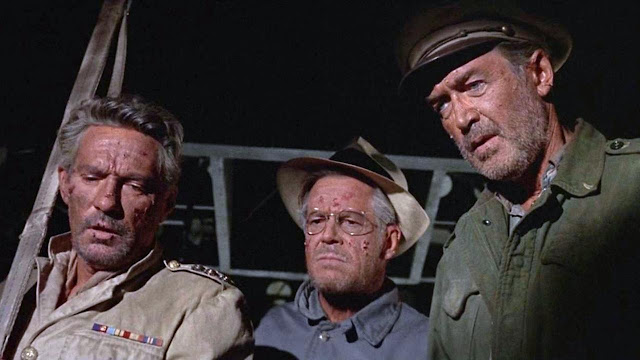 All this comes together in a superior package of film making, expertly made and superbly directed, with the actors embracing their well-developed characters with glee, making this in many ways part disaster movie, part chamber piece play. I love the little surprises it throws at you – just as you think you know a character there is a moment that surprises you or makes you reassess them. The tensions and dangers of survival in extreme conditions are brilliantly captured. There isn’t a weak moment in the film, and plot twists and surprises throw curveballs at the audience, some of which bring terrifying consequences. For any lovers of survival stories, acting or tense movies this is an absolute must.
Email ThisBlogThis!Share to TwitterShare to FacebookShare to Pinterest
Labels: 1965, Christian Marquand, Dan Duryea, Disaster Films, Ernest Borgnine, George Kennedy, Hardy Krüger, Ian Bannen, James Stewart, Peter Finch, Richard Attenborough, Robert Aldrich, Rolanld Fraser, Survivalist films