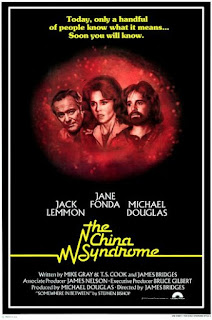 Do we really trust nuclear power? There is something about the dangerous possibilities of splitting the atom that alarms people even today. For all that burning coal wrecks our atmosphere, people would still rather that than live downwind of a station powered on substances that could obliterate everything within a five mile radius if something went wrong. The China Syndrome is about exactly that, an accident at nuclear power plant that could spell disaster for California.

Kimberly Wells (Jane Fonda) is a roving reporter for a Californian news channel, who (thanks to her sexist bosses) is constantly relegated to ludicrous puff pieces (“Today a hot air balloon landed in downtown LA!”). Sent to a nuclear power plant, she stumbles upon the real news story she has waited her whole career for when she and camera-man Richard Adams (Michael Douglas) secretly film a near catastrophic incident. Investigations try to brush the event under the carpet, but shift supervisor Jack Godell (Jack Lemmon) knows corner-cutting and cost-saving is putting the whole of LA at risk – and, much against his inclination, he needs to speak out.

The China Syndrome comes very much from that burst of 1970s conspiracy thriller films where shady big-business types are willing to throw almost anything under the bus in order to make a big bonus. It’s a film that takes a pop not only at the heartless bastards running a shoddy nuclear power plant (who couldn’t care less if the reactor is poorly welded together, so long as the money keeps rolling in) but also the hypocritical cowards running the media. The heads of the news channel kowtow swiftly to big business and are staggering in their sexism and race-to-the-bottom news coverage.

This film is as much about this brainless conformism as it is the dangers of nuclear power. The film is full of people who don’t want to rock the boat: half the people working at the plant would rather turn a blind eye to problems than pay the personal price of exposing them – even Jack Lemmon’s manager is the most reluctant whistleblower you’ll see in the movies. Fonda’s journalist may not be happy with her role as airhead eye-candy, but she will play the game in order to get ahead in the industry the role – and many of her media comrades seem almost totally lacking in any journalistic instincts. The film is bookended by inane TV coverage and advertising, a condemnation of an America that doesn’t ask questions and is sleepwalking towards catastrophe.

This catastrophe is, of course, extremely close – the power plant nearly goes into meltdown because a single dial gets stuck on a high reading, leading the control room to believe the nuclear rods are about to get flooded rather than nearly being exposed. Bridges mines a heck of a lot of tension from this crisis – told entirely from the perspective of the control room – as workers react with both stressed fear and a practised professionalism to a crisis that could become a disaster. Its part of a film where regular joes are generally professional and good at their jobs, but are let down and betrayed by the culture encouraged by the higher-ups. 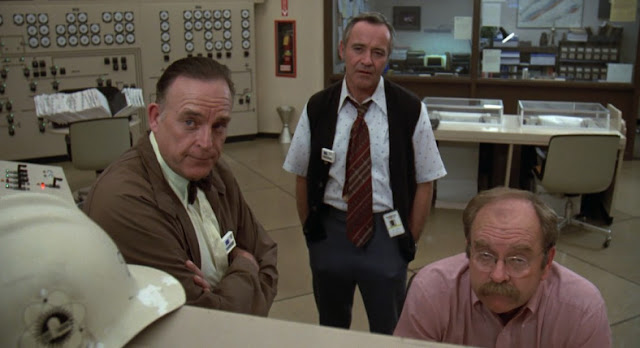 Some of these themes, however, get a bit muddied in the film’s middle third, which gets bogged down way too much in nuclear theory, committee meetings, slow explanations of different types of weld, and dry lectures on the functioning of nuclear energy. While it is admirable that the film has no score, you can’t help but feel that a little music here to add some drama to Lemmon looking at x-rays or Fonda staring at diagrams could have helped pump up the tension.

But it all gets paid off by the sudden (and surprising) shift to action and drama in the film’s final third, kickstarted by a surprisingly gripping car chase between Jack Lemmon’s quiet station manager and some shady goons hired by the company. Suddenly the film is powering through a tense series of set pieces that both feel like a different movie, while still a natural progression of the stakes.

Bridges directs the film very well. Each scene is calmly and coolly assembled, and he has a great eye and ear for technology and the noises and motions of machinery, which dominate the film – even if the film is rather in love with these background sounds, which risk taking over the soundtrack. It’s all part of stressing the cold mechanicalism and lack of humanity throughout both these industries. Sometimes the foot comes off the gas a little too much – you could probably trim at least 15 minutes – but when it comes to the moments of tension he directs with sharp snappiness.

The acting is also sublime. Jane Fonda is extremely good as Kimberly Wells. Initially she seems as light and superficial as the stories she is forced to cover, but Fonda paints a clever picture of a woman squeezed into playing a role, but yearning for (and capable of) so much more, who when she finds her moment shows levels of determination and cunning you would never have expected. For all her desire to become a 'proper' journalist though, Wells is savvy enough to make sure she is being filmed from her good side... Fonda makes her a careerist who uncovers a sense of moral purpose. She also manages to bring real emotion to the role, making Kimberly Wells a character we swiftly connect with. 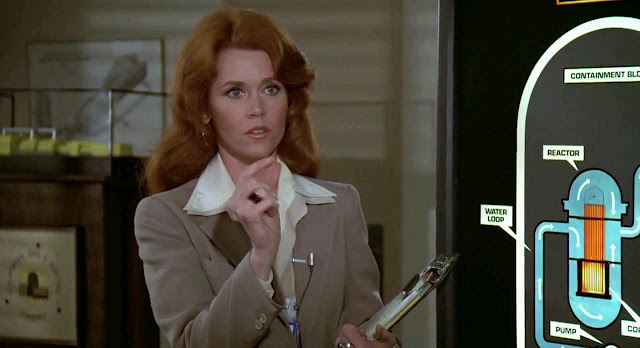 The movie however is stolen away by Jack Lemmon, brilliantly low-key and everyday as the shift manager who becomes an overwhelmingly reluctant whistleblower. Lemmon’s performance is a perfect study in smallness, of a quiet dignity. He’s got no desire to rock the boat, quietly stating that the “plant is his whole life” – but when stirred, his professional pride transforms into determination to do the right thing, even while his lack of magnetism makes him unpersuasive and hard to take seriously. It’s a terrific performance of low-key tragedy, with Lemmon building the tension with small flashes of resentment, fear, determination and disillusionment flashing across his face. It’s a great reminder of what a marvellous dramatic actor Lemmon was.

Expertly produced by Michael Douglas (who does sterling work in the third-banana role as the camera man overflowing with conviction), The China Syndrome may at times be dry, but it makes up for that with its moments of high drama and moral conviction. By and large it avoids hectoring and lecturing the audience (when not teaching us about nuclear power), and lets its points be soft-sold rather than banged home. With some terrific performances, it’s a film that still feels relevant today, and is a great example of the 1970s conspiracy thriller genre.
Email ThisBlogThis!Share to TwitterShare to FacebookShare to Pinterest
Labels: 1979, Conspiracy, Jack Lemmon, James Bridges, James Hampton, Jane Fonda, Michael Douglas, Nuclear tension, Peter Donat, Scott Brady, Wilford Brimley