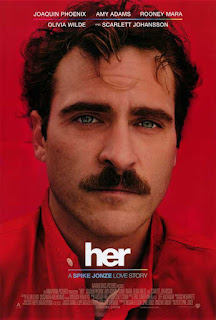 Every so often you start off engaged with a film and then, the longer it goes on, the less and less you like it. I couldn’t put my finger on the exact moment where I started to really take against Her, but I certainly had by the end of it. As someone once famously sort of said about Kriss Akubusi: “hard to dislike but well worth the effort”.

Anyway, Her is set in the near future. Theodore Twombly (Joaquin Phoenix) is a sensitive, insular man who writes personal romantic letters for other people who aren’t articulate enough (or bothered) to do it themselves. Getting divorced from his childhood sweetheart Catherine (Rooney Mara), Theodore downloads a new Artificial Intelligence Operating System for his computer. The system is designed to create a personality that appeals to the customer – and that is certainly the case here with this system, Samantha (voiced by Scarlett Johansson). Theodore, finding it hard to connect with the real world, is drawn to Samantha and, as she grows and develops, they start a relationship. But can the relationship survive the divide between realities and Samantha’s growing self-awareness and personality?

Okay. I’m going to swing hard for this film, so let’s start with what’s good shall we. Spike Jonze directs very well. It looks beautiful. There is some lovely music. The future world it shows is close enough to our own to still feel connected. Amy Adams is rather good as Theodore’s old college friend, and Rooney Mara turns in a very good performance as Theodore’s wife, a woman who doesn’t let Theodore get away with his excuses. Scarlett Johansson is perfect casting as the alluring and engaging voice of Samantha (much as I was primed to be annoyed by her post-production replacement of Samantha Morton, who had been on set with Phoenix). There are some sweet and even romantic moments.

Okay that’s it. This is a film overwhelmingly, unbearably, unbelievably pleased with the cleverness of its own concept and trite ideas (a man loves his computer – take that our modern consumerist world!). It then goes on to tell us almost nothing, bar the most basic statements about our struggles to interact with, and relate to, each other in this technology-filled world. Apparently it’s hard to create bonds with real people where we are viewing everything through our phones. Bet that has never occurred to anyone before right?

But my main problem with this film is the lead character. Now I will say that Joaquin Phoenix does a good job with this role, and his skilful acting brilliantly holds the story together. He does extremely well with a part that is almost exclusively reacting to someone not actually there. But my problem is with this characterisation of Theodore. To put it bluntly, he’s a prick.

In fact, he’s the sort of quirky nerd beloved of this genre, but take a long look and he’s basically a complete creep. And all his relationships with women seem to be based on him not wanting to engage with the problems of the other person. He requires the focus to be on his wants and needs, as if he is the only person in the world who can be sensitive or sad – no wonder he falls in love with a computer programme designed to reflect the behaviours he finds appealing.

“You want a wife without the challenges of dealing with something real” his wife accuses, eagerly pointing out his inability to deal with or even want to engage with human emotions. The film wants to give him a pass, because he is such a sensitive soul, but it’s bullshit. Theodore is a deeply selfish person, despite what the film wants, who has that geeky, arrogant, self-satisfied sensitivity that blindly says “if I struggle in the world, then it’s the fault of the world not me”. 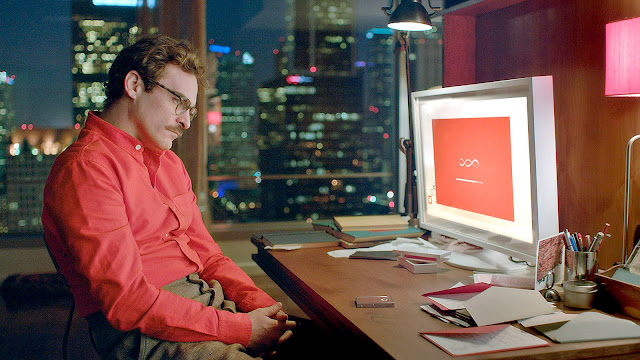 Theodore is a constant happy victim, a whining, softly-spoken, guilt-tripping prick who only sees himself as a victim and makes no effort to change or understand his behaviour to other people. The film wants us to think that the world is a puzzle to his poetic soul, but it’s actually a maze he doesn’t want to find a way out of. He doesn’t want to engage with it and only feels justified and reinforced in these feelings by everything he does.

He is like the perfect ambassador for passive aggressive guys: “Oh I don’t get the girls because they don’t want to open themselves up to my sensitivity blah blah blah”. Theodore goes on a blind date early in the film: it goes well, they make out, sex is on the cards and then she asks “Before we do anything, will you see me again?”. Theodore can’t even bring himself to make even the smallest offer, meekly babbling about having a busy weekend. When she reacts angrily and leaves, the film wants us to side with Theodore’s timidity, rather than say “yeah it is a bit shitty to let a girl put her hand down your pants and then not even show the slightest interest in seeing her again, and then call her unpleasant”. Fuck you Theodore.

Theodore is basically a controlling arsehole and it’s where the romance of the film drains out. He clearly has no idea why his marriage ended, but while the film wants us to think he’s too sensitive for the rough and tumble, it seems clear he had no interest in, or comprehension of, his wife’s life. She is constantly subtly blamed for not having patience with Theodore – the film ends with him writing her a cathartic e-mail saying he will always love his memory of her and thanking her for being part of his life, forgiving her from leaving (again, screw you film). Instead she, like other people, doesn’t deserve Theodore because she doesn’t have the patience to delve into his life.

Theodore, though, has no depths. He’s a bland, faux-poetic guy with a nervy disposition and a disinterest in other people’s emotions, focused only on his own gratification. He wants his relationships to adjust to what he needs them to be. As Samantha grows and develops into a more fully rounded personality, his first reaction is hostility and jealousy at the thought of her talking to other people and operating systems. It’s not sweet and endearing – or Theodore again being taken advantage of, as the film wants us to think – it’s creepy, and Theodore is the sort of passive aggressive gentle guy who ends up stalking and murdering the girl who rejected him.

How can you engage with the points of this film, when the central character through whom everything is filtered is so awful? Distance in relationships in this modern world – and the lack of genuine interaction – is a point that hardly needs hammering home as it does here. The trite points about love and relationships the film makes are all wrong. The film is so on the nose about distance between people and the artificial nature of our interactions, the hero even writes other people’s love letters for them. It’s subtle as a sledgehammer. 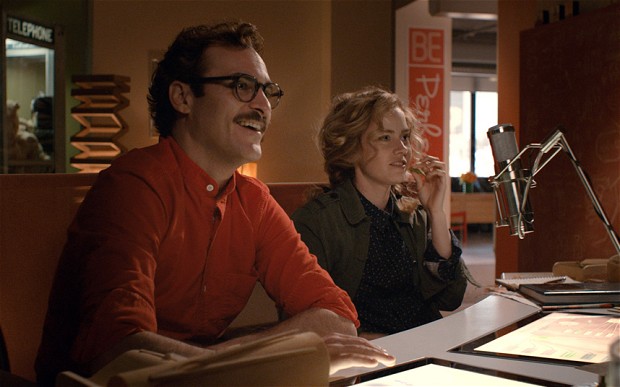 Computers and phones are everywhere and everyone uses them, but there is less insight and heart in this story than an average episode of Black Mirror (which would have done the same thing in half the time). The film does its best to build a romance between the two, but it never quite lands or has the impact it should, because it never feels like an equal relationship: first Theo has the control, then Samantha grows beyond anything Theo is capable of but is still trapped by her initial programming of devotion to him. What point is this meant to be making about romance and commitment? Theo lives in a dream-world and does so until the end of the film.

Her is the sort of film lots of people are going to love. It uses the conventions of romantic films very well. It has darker moments, such as a sequence where Theo and Samantha try to use a surrogate for sex (a scene where to be fair I could understand why Theo is creeped out and disturbed), but none of these ever comes together into a coherent point. And Theo remains, at all times, a block on the enjoyment of the film, an unpleasant figure hiding in plain sight that stops you from falling for the film. In love with itself, in love with its idea, in love with its cleverness, this is a film that tells you everything about the smugness of the geek and nothing about the subjects it actually wants to get you thinking about.
Email ThisBlogThis!Share to TwitterShare to FacebookShare to Pinterest
Labels: 2013, Amy Adams, Brian Cox, Chris Pratt, Joaquin Phoenix, Kristen Wiig, Matt Letscher, Media satire, Olivia Wilde, Rooney Mara, Scarlett Johansson, Social issues, Spike Jonze