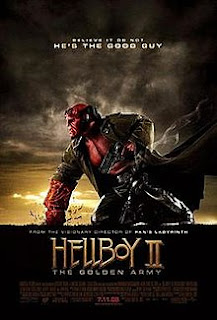 There is something quite sweet about the Guillermo del Toro taking all the chips won for directing Pan’s Labyrinth and cashed them in for this comic book sequel. There you have the distillation of the man’s career right there: one for the artist and then one for the teenage boy he used to be. But Hellboy II is a marvellous creation, a gorgeous to look at, magical, rather funny comic book film crammed with amazing images, ingenious creatures and sparkling moments of action and adventure.

Thousands of years ago, the magical creatures of the world, led by the elves, fought a war against mankind. To win a desperate victory, goblins created the dreaded Golden Army, an indestructible mechanical army. Horrified at the slaughter, Elven King Balor (Roy Dotrice) offered a truce. His son Prince Nuala (Luke Goss) disagreed. In the present day, Nuala goes about to collect the three pieces of the crown needed to control the Golden Army – and only Hellboy (Ron Perlman) and his friends from the BPRD can stop him.

Hellboy II is immensely imaginative and wonderful to look at. Perhaps inspired by Pan’s Labyrinth, the film plays like a cross between the most brain-twisting magic depths of that film and a traditional comic book. So we get dozens of creatures, each pulled from the pages of some sort of acid tripped Tolkien novel: with extended hands, distorted heads and steam-punkish extremities, the creatures on show are masterpieces of design and character. The juxtaposition between this ethereal, magical world of elves and goblins and mankind’s expansion brings home the danger this world is in: the Elven King’s palace in the modern day is in a sort of converted sewer, while Nuala’s base is an abandoned underground line. With some performers (often del Toro’s muse Doug Jones) under layers of make-up and prosthetics, it’s extraordinary the amount of personality each of these creatures gets. When the film takes a turn down a Diagon Alley-style market, you regret Del Toro never got to make a Harry Potter film. 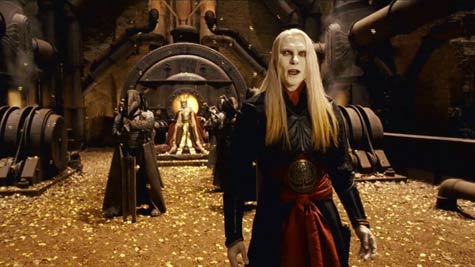 Hellboy looks both part of this world and also like a muscular bull in a china shop. Ron Perlman continues to be perfect in the part, and captures the wry, cynical, slightly teenagerish humour of the part. Del Toro does a wonderful job of showing the sense of family between Hellboy, his lover pyrokinetic Liz (a decent performance by Selma Blair, although she is too often relegated to the “woman” role), and his surrogate brother, amphibious empath Abe (Doug Jones getting to provide the voice as well this time, and getting a fine display of growing emotional expression). The quiet character moments between the action really ring true – a very funny sequence sees Hellboy and Abe bemoan their romantic entanglements by getting drunk while singing Can’t Smile Without You.

It’s scenes like that which add the heart alongside the throbbing action and colourful character weirdness of del Toro’s vision. It’s also part of the distinctiveness of the whole vision of the film. Everything is seen with as fresh an eye as possible, and makes for some really striking images and scenes. The steam-punk aesthetic of the Golden Army seems to fit together perfectly with the more organic world of the Elves. There’s a sense at all times that the design and pacing of the film have been carefully thought through so everything fits logically together. Starting the film with a wonderfully animated Golden Army backstory (voiced by a briefly returning John Hurt for maximum impact) is just another reflection of the artistry at work here.

There is a nice vein of humour running through the film – there are some funny sight gags as characters walk nonchalantly through bizarre goings-on in BDRP HQ – and the more gory moments of the action are shot with a certain black comedy. The film also gets a decent few points in about how humanity rejects things that are different, which are not surprising but still hit home.

Hellboy II does start to become a bit more generic as it heads towards its final denouement. Most of the events of the final few scenes are pretty predictable from the outset, and offer little in the way of surprises. For all the chemistry she has with Perlman, Blair is more or less relegated to the sidelines for large chunks of the film (usually the action). But for most of the run time, it’s inventive, imaginative fun with a director bringing a distinctive vision to the genre while also kicking back his heels and having fun. And fun is what it wants the viewer to have as well – don’t try too hard, sit back, relax and enjoy yourself.
Email ThisBlogThis!Share to TwitterShare to FacebookShare to Pinterest
Labels: 2008, Anna Walton, Comic books, Doug Jones, Guillermo del Toro, Jeffrey Tambor, John Hurt, Luke Goss, Ron Perlman, Selma Blair, Seth MacFarlane