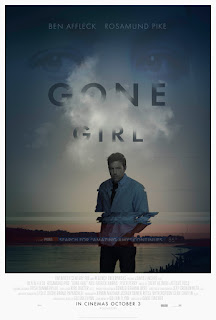 In our modern media age, we’ve got massive expectations for how people are meant to behave. With so much of our perception of life filtered through the internet and films we’ve seen, we are reassured when we see behaviours we expect to see, and disconcerted when we see those we haven’t been trained to see. Not distraught enough at your wife going missing? Well you must have done it then!

That’s the problem that faces Nick Dunne (Ben Affleck) in this chilling, intricate adaptation of Gillian Flynn’s best-selling book. Nick’s wife Amy (Rosamund Pike) goes missing in mysterious circumstances, possibly a kidnap, possibly a kidnapping gone wrong. The case becomes a media sensation, but the problem is Nick just isn’t expressive enough, won’t play the role of weeping husband. Instead he’s calm, distant and polite. So naturally rumour swirls that he did it – particularly after more and more manufactured evidence rears up to suggest he might have done. But does Amy have darker secrets than anyone might even suspect? Well to say any more would be a spoiler.

Fincher’s film is a tour-de-force of deliberately cold, polished looking perfection – which is designed to reflect back the surface perfection of the Dunnes’ deeply flawed marriage. Fincher’s film is in many ways a jet black social satire, using its almost outlandish shocks and twists to involve the audience in that “oh-no-they-didn’t!” way, in the same way that the Dunne media story fascinates the people in the movie.

“What have we done to each other?” Nick asks in voiceover early in the film, and it’s the question the film tackles obliquely: how much of the flashbacks to the relationship we see between Amy and Nick is real and how much springs from unreliable narration from Amy’s diary? Two handsome people living the American dream, but how much of it is an invented or projected narrative? Is their whole life a performance they are living for themselves and for others? Poor old Amy is even already semi-fictionalised person, a parents using her life as inspiration for a beloved children’s book character Amazing Amy.

So when Amy goes missing, the strain on Nick is very different from what you might expect. Rather than being consumed with grief, he feels wearied and dutiful about continuing a performance of a marriage which has long since ended. Nick’s actually too honest for this world – he won’t put on a show of how he is supposed to feel, he can only try not to make too much of a show of what he really feels. The mystery that builds around his and Amy’s marriage is born in this blunt honesty, of someone who won’t be what people want him to be. Of course that doesn’t stop Nick from being selfish or even a whiner.

Fincher mixes this intelligent commentary on society with, to be honest, the sort of bizarre extremism and bunny-boiling antics that make you unsurprised to hear he was inspired by Paul Verhoeven while making the film. It’s a film that shifts gears notably in the second half to become an increasingly gothic horror-thriller. A lot of this is powered also by Rosamund Pike’s excellent performance as Amy, a woman who seems almost completely cryptically unknowable, whose whole life has been a performance, and for whom taking on a series of roles and personalities is clearly not a challenge. Needless to say the person she turns out to be, and what she is capable of, is completely different from what the film leads you to expect.

It’s no surprise that a relationship featuring a person like Amy could go as south as the Dunnes’ has, but then Nick is hardly a saint either. Ben Affleck is just about perfect casting as a sort of All-American charmer gone to seed, a prickly fellow who wants privacy but also partly grows to enjoy the drama that surrounds him, once he works out the game he is playing. Fincher’s deliberately distant, smoothly clean-surfaced film frames modern day aesthetic perfection all round this seemingly dream couple.

The whole film is a nightmare vision of a love match gone wrong, of the after-effects of a beautiful story that has spiralled out into disappointment and everyday mundane life. And that struggle to keep the romance going in the familiar is at least something many of us can understand right? So it’s enjoyable to see that matched up with the freaky, semi-gothic blood and guts the film serves up in the second half, and the almost surreal Grand Guignol plot developments that power that half of the film (shot and scripted by Fincher and Flynn with a brilliant mixture of tension, horror and black comic delight at its extremity).

Like many Fincher films, there are several delightful performances. Pike is a revelation in a gift of a role, Affleck very good channelling his life lived in the spotlight. Carrie Coon is a stand-out as Nick’s exasperated, down-to-earth and loving twin sister. Kim Dickens is authorative and questioning as the police detective investigating the case, and Tyler Perry assured and cool as a hot-shot lawyer. Playing way against type, Neil Patrick Harris is pretty unforgettable as a slightly self-satisfied rich kid still holding a candle for Amy after all these years.

But the main success of the film is the whipper-sharp coldness of its execution, the cool tension Fincher ekes out of every moment, and the violent, Vertigo-ish obsession he gets out of every moment. Gone Girl works because it’s at first a chilling what-if story of a man in a media storm, which becomes a sort of black comedy so extreme that it pulls a delighted audience in to gasp at audacious characters getting away with outrageous things. As a black comic thriller it’s delightful.
Email ThisBlogThis!Share to TwitterShare to FacebookShare to Pinterest
Labels: 2014, Ben Affleck, Carrie Coon, David Fincher, Kim Dickens, Missi Pyle, Murder mystery, Neil Patrick Harris, Patrick Fugit, Rosamund Pike, Sela Ward, Thrillers, Tyler Perry