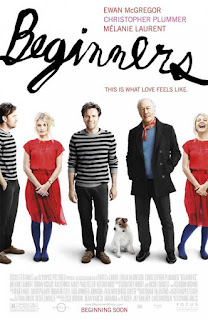 Oliver Fields (Ewan McGregor) is a reserved man who has struggled to hold a relationship down because of his own emotional distance. His world is shaken when his father Hal (Christopher Plummer) comes out at the age of 75, after the death of his mother, and proceeds to lead an active life in the gay scene of LA, including taking on a boyfriend, Andy (Goran Višnjić). After his father’s death, reflecting on Hal’s love of life and increasing emotional honesty makes Oliver consider his own life and start to tentatively consider a relationship with a French actress, Anna (Mélanie Laurent).

This heavily auto-biographical film was based on the life and experiences of writer-director Mike Mills. It has moments of genuine sweetness and light, occasionally undermined by the slightly smug quirkiness that creeps into the story at several points. Mills sometimes tries a little too hard as a director, using montages of stock footage to place years into context and to add a quirky sheen to the drama.

In fact it’s that quirk that often gets in the way of the drama in the film, Mills relying too often on meet-cutes, a dialogue Oliver has (in subtitles) with his dog, jolly picture montages, the cartoons Oliver draws on themes like “The History of Sadness”, the achingly clever-clever graffiti Oliver sprays on walls etc. etc. Maybe I am just cold of heart but this sort of stuff gets on my nerves rather than awakening my warmer feelings. Clearly I’m getting old.

Someone who isn’t getting old is Hal. Played with Oscar-winning bravado and joie de vivre by Christopher Plummer, the film gets most (if not all) its emotional mileage out of Hal’s embracing of life and his equally profound regret at the years of concealment and emotional distance he inflicted on others. One tearful moment sees the extremely sick Hal holding Oliver’s hand on a bed, sadly reflecting he wanted to do this throughout Oliver’s childhood but didn’t feel he could.

The film carefully positions Hal’s late acceptance of his personality and explosion of embracing life as an inspiration, and contrasts it with Oliver’s buttoned up repression. To be honest, someone as repressed and traditional as Oliver might well have taken slightly longer (you suspect) to deal with the fact that his dad comes out after the death of his mother – but then this is basically a father-son romance, so you can’t blame Mills for trimming down this expected drama.

Instead the story focuses largely on Oliver learning to open his heart to a relationship with Melanie Laurent’s French actress (a relationship by the way so impossibly quirky the two of them meet at a fancy dress party – he’s dressed as Freud, she can only communicate through writing notes because she has laryngitis. To be fair it’s marginally less irritating than it sounds). This story is cross-cut with flashbacks to Hal’s last few years that illustrate different lessons Oliver learned from his dad.

This is all rather artfully and gently done, but very traditionally structured. The flashback material with Hal is far stronger and Christopher Plummer’s mix of playfully raging against the dying of the light and gentle emotion and sadness overwhelms the modern plotline. It’s hard to get wrapped up in Oliver’s stumbling shoot-yourself-in-the-foot courtship of Anna, when you have Plummer ripping through a beautiful monologue on how he was desperate not to be as distant as his own father. Even the jokes get overwhelmed – nothing in Oliver’s storyline is as amusing as Hal raving over garage music.

The real interest to be honest is in the relationship between Hal and Oliver, and the late blooming of emotional honesty and love between them (Oliver claims he can barely remember Hal from his childhood, and flashbacks confirm this). Even this however could have had more impact if the film had allowed more of this distance to be seen in the film, as we then lose the impact of the two characters starting to bond.

In fact I’d love to have seen more of Hal and Oliver together, perhaps more intercut with flash-forwards about Oliver learning to accept love and joy into his life in the same way Hal did in his final years. Reversing the format, effectively. The warmest bond in the story is between Hal and Oliver and this seems a little lost. Ewan McGregor does his best, but he feels slightly constrained by the role, as if aware that he had the pressure of playing the director’s own life story. Melanie Laurent is adorable as Anna, but she feels like the sort of character one only meets in movies – beautiful, sexy, cute, showing the sort of incredible patience for the timid, confused, difficult Oliver that never happens in real life (in my experience).

Such a format change would also mean more Christopher Plummer, which is never a bad thing – and certainly wouldn’t be here, in one of Plummer’s finest performances: fun, witty, warm, kind, sad and gentle with a very touching relationship with his much younger lover (played very well by a sweetly naïve Goran Višnjić). It’s Plummer’s film and he rides above a story that often seems a little too unoriginal and quirky than you might have expected.
Email ThisBlogThis!Share to TwitterShare to FacebookShare to Pinterest
Labels: 2010, Christopher Plummer, Ewan McGregor, Family drama, Goran Višnjić, Mary Page Keller, Mélanie Laurent, Mike Mills, Romantic comedy