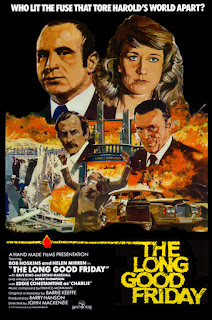 The Long Good Friday nearly turned into a one-hour TV special starring a dubbed Bob Hoskins. The fact that it didn’t – and that today it can stand as one of the greatest British films ever made – is thanks to George Harrison’s Handmade Films, which bought the rights and saved the film. Thank God they did, as this is brilliant: thrilling, dangerous, intense but witty, strangely tender, satirical and smart. Fantastically made and wonderfully acted, it’s not just a great gangster film, it’s a great film.

Harold Shand (Bob Hoskins) is the undisputed gangland boss of London, desperate to turn legitimate. He has a plan for development of London’s dockside into a paradise of office blocks and apartments. All he needs is a big investor to support his “corporation” to make the final push. On an Easter weekend he prepares to greet an American investor from a similar “company” to his own. But as Shand prepares for this life-changing weekend, his business is hit by a wave of killings and bombings that seem targeted at shattering his organisation. What’s behind this? Who is “having a go”? And how does this link with a mysterious money shipment we witnessed at the start of the film? Shand’s going to find out – and has to do so without his investors getting cold feet.

The Long Good Friday is a well-written, brilliantly structured mystery mixed with some brutal gangland violence. Mackenzie’s film is lean and mean but laced with dry, biting humour. Everything in the film works perfectly, and it really understands the veneer of culture, class and decency that gangsters like Shand like to put over their crime dealings.

Not that Shand isn’t a decent bloke of course. Bob Hoskins is simply superb as Shand, a likeable, strangely decent guy at first, who seems to somehow shrink and twist as the film progresses and he is less and less able to control the anger he keeps bottled up. Shand clearly cares deeply for those around him, but he’s also clearly stubborn and convinced of his own superiority. Hoskins brings the part a humane gravitas, a force of nature fury that burns through the film. And when confronted with opponents he can’t understand, he still tries to use the rules of gangland to take them on.

Of course these rules are completely unsuited for his IRA opponents. Despite the advice of his pet policeman Parky, Shand is confident that he can deal with these bomb-toting fanatics. Even worse, he thinks that they are basically playing by the same rules that powered his own rise to the top of the gangster tree. Part of the tragedy of the part is seeing someone who essentially appears relatively likeable at the start of the film fall back on the violence and rage that powered his assent to the very top. Needless to say the IRA aren’t intimidated by cockney thugs, and have no intention of letting Shand get away with his attempts to strike back.

Here is a film brave enough to not only show the IRA at its centre, but to make them as effective and ruthless as this. Not even our geezer gangsters can take them on, and the poor plods seem petrified as soon as they rear their head. Could there be a more cutting criticism of Britain’s policy in Ireland? Terrorism has hardly gone away since – you imagine Shand being equally outmatched by Al-Qaida. 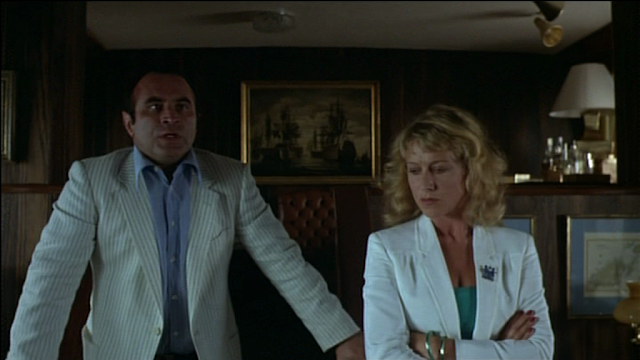 As well as a gripping gangster film, The Long Good Friday is a prescient and intelligent criticism of Thatcherism. Shand is actually pretty much spot-on with his vision of London being redeveloped into a political and economic power-house, one of the major cities of Europe. Many of the locations the film uses would be unrecognisible today, as they are all sites of offices and apartments. Shand has a 1980s swagger to him, a barrow-boy made good who likes to think of himself as a visionary businessman. He’s desperate to grab for himself a bit of the new money he senses could be washing around Thatcher’s Britain. So the film makes a nice satire of the “loadsamoney” generation, as well as of the gangster world of the East End. Shand’s yacht and flat are the quintessential yuppie pads, and Shand’s motivation is raking the cash in.

British hubris actually seems to lie at the heart of the whole film. Shand’s swagger and super-confident, “Britain reborn” attitudes are all based in his firm belief that Britain has its own special destiny. Of course, as events begin to hit home, this sense of British pride (represented by Shand’s determination to reshape London into a city of glass and office complexes) begins to shrivel under the weight of events. Shand is reduced to angrily denouncing everyone from the Irish to his potential American partners to the other nations of Europe.

(In fact it’s interesting watching the film in the light of Brexit – Shand would on the surface seem to be the poster boy for a certain type of UKIPer, but he’s actually passionately excited about the opportunities the Union presents, and the centrality of London to that world. He’d almost certainly loath Farage.) 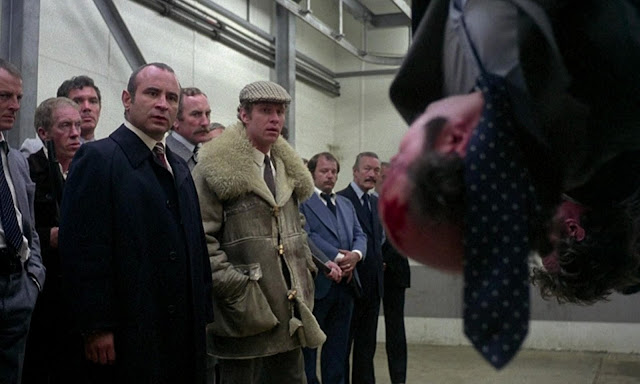 All this thematic content – and this is a hugely British film, instantly recognisable to anyone who has grown up here – gets swept up in this brilliant gangster flick. The acting is sublime. Helen Mirren is a stand-out as a woman who is a very equal partner in Shand’s business empire, just as smart and just as ruthless. Derek Thompson (him off Casualty!) is good as a slightly sleazy major-domo, as is PH Moriarty as a gangland heavy (he certainly looks the part!). Future stars like Kevin McNally, Paul Freeman, Dexter Fletcher (as a kid) and most notably Pierce Brosnan (in his first acting job as a handsome IRA hitman) fill out the cast.