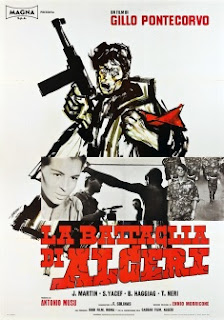 Sometimes, when watching The Battle of Algiers, you have to catch yourself and remember everything you are watching was staged rather than real footage. That right there is the greatest strength of this film, and its ongoing legacy. It feels more real than the news, it looks more authentic than reality. Match that with the fact that (and it says a lot for the world that this is the case) its themes remain painfully resonant today, and you can see why it has had such a lasting and profound impact on film-makers.

Pontecorvo’s film dramatises (although that almost feels like the wrong word) events in Algiers, capital city of French Algeria, from November 1954 to December 1957 when the Algerian War of Independence turned the city into a near warzone, with its hub being an increasingly brutal struggle for control of the Casbah between the French authorities (and then army) and the Algerian National Liberation Front (FLN) cells.

That description only gets a flavour of the film, which reconstructs the story with a truly awe-inspiring immediacy that feels like a slice of real life. The film has a fearless willingness to depict the dangerous struggle and violence in a combat between terrorists and soldiers. So we get violence on both sides, torture, murder, beatings, bombings of young civilians and other acts of brutality, all chronicled with a documentary realism that never feels exploitative or distasteful.

The film is often hailed as being scrupulously even-handed. I’d argue it isn’t quite – what it does do is recognise that both sides are human. The cause of Algerian independence is clearly one the film finds sympathetic, and while it shows acts of terror from the Algerians, the real acts of violence and prejudice come from the French authorities and citizens. The film doesn’t turn the Algerian terrorists into unspoilt martyrs, but it certainly regards their cause as right. So it can show them killing civilians and engaged in acts of violence, but still admire their cause (the film was made with the involvement of several former members of the NLF both in front of and behind the camera).

The film’s depiction of the French soldiers also gives more of an impression of even-handedness. These soldiers are not brutal or sadistic, but functionaries doing about a job (just following orders?) with a ruthless efficiency. The casting of Jean Martin (the only professional actor in the film) as French commando leader Colonel Mathieu also perhaps weights things, as Martin gives an engaging, morally conflicted performance, and the film lays great stress on Mathieu’s own experiences during the Second World War in the French Resistance and (it’s implied) in a concentration camp. 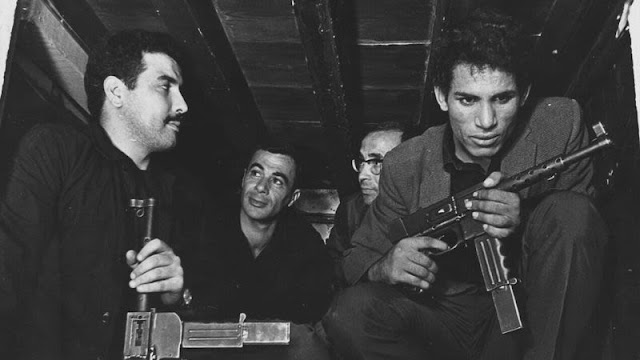 The French soldiers go about their task of pacifying the terrorists with a campaign of capture, enhanced interrogation and systematic elimination of cell leaders, using their superior resources and training, in a way that the CIA (which screened the film for its agents in 2003 to help them understand terrorist cells) described as being a complete success militarily, but a total failure politically. It stamps out the Algerians in the Casbah, in a way that reduces casualties and restores order – but totally fails to win over the precious hearts and minds.

And Pontecorvo knows it’s hearts and minds that his film is all about. His camera immerses us in the heat and tension of the Casbah, picking out the faces of the non-professional extras (and actors) that populate his film, showing the bubbling tensions and resentment slowly building in a population that doesn’t start out as bitter and extremist, but becomes more and more so as the French stamp out the Algerian independence movement. People swirl around the action, increasingly objecting to the strict control procedures that segregate the Casbah from the rest of the city, and at several points crowding into potentially violent mobs, spurred on by some members of the NLF.

The NLF also has little compunction in the tactics it has to employ in order to stand any chance against the French. Pontecorvo frames the film around the experiences of Ali la Pointe (a striking performance from non-professional Brahim Hadjadi). It opens with la Pointe trapped by the French soldiers, flashing back to his initial recruitment, radicalisation and increasingly pivotal role as a cell leader under more the more urbane and political Djafar (Yacef Saadi, another non-professional playing a version of himself).

La Pointe is our audience surrogate – and it’s surprising how we find ourselves drawn towards him. Especially since within the first 15 minutes he’s moved quickly from murdering gangsters in the Casbah to shooting cops and leading riots. Pontecorvo shoots and edits these moments of terrorist action and planning with a Hitchcockian skill. One particularly brilliant sequence follows three NLF women being selected, prepared for, traveling to and carrying out a series of bombings of cafes and bars in Algiers (the victims at one seem to be exclusively teenagers and young people).

The film is full of moments like this, all filmed with a gripping down-to-earth black-and-white realism, buzzing with tension. It’s brilliantly assembled and totally compelling, a documentary slice of Italian neo-realism that presents a fascinating look at the dangerous politics of resistance and occupation. The French military’s heavy-handed tactics are totally effective – even torture is shown to yield enough results to justify its use – but they are also completely wrong, morally repugnant but executed by soldiers going about their duty with no bitterness (Mathieu frequently tells the press that he hopes for a bright future for Algiers and even doubts the wisdom of occupation in the long run).

Pontecorvo’s film remains alarmingly prescient and relevant today – and it’s actually a little scary how little the world has changed. You can just as easily imagine the same events happening in Iraq or Afghanistan today. It’s told here with no sensationalism but a mostly objective even-handedness, that makes clear the side it favours but doesn’t demonise the other. As a slice of history turned into film it’s impeccable.
Email ThisBlogThis!Share to TwitterShare to FacebookShare to Pinterest
Labels: 1966, Gillo Pontecorvo, Historical epics, Jean Martin, Thrillers