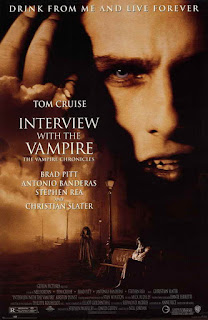 Why do vampires constantly keep rearing their ugly heads in films? What is it about them that we seem to find so addictive? Interview with the Vampire is a vampire film that takes a slightly different tone and tries to explore what it might actually be like to live the life of a vampire, the actual psychological impact it might have. It’s just a shame the film also can’t escape the temptation to fall back on the high camp the genre often gets trapped in.

Anyway, the film opens in modern day San Francisco, with young reporter Daniel Molloy (Christian Slater) interviewing a man named Louis (Brad Pitt) who claims to be an ageless vampire from the late 18th century. Louis tells his life story: turned to a vampire by the hedonistic Lestat (Tom Cruise) when he was consumed with grief at the loss of his wife and child. Louis struggles with the morality of taking life, unlike Lestat’s joy in killing. Later they turn a dying girl Claudia (Kirsten Dunst), who over the next 30 years matures psychologically but remains in the body of a 12-year-old. Louis and Claudia slowly begin to fear Lestat’s control and struggle to escape from his shadow.

Interview with the Vampire wants, desperately, to be an intellectual vampire film. A sort of Freudian exploration of the impact of suddenly becoming a creature that can never see daylight, sleeps in a coffin and has an insatiable hunger for human blood. Does it work? Well sort of, I guess. But the problem is most of the depression is carried by Brad Pitt’s Louis and, to put it frankly (as Lestat observes) he’s a whiner. His very human struggle with taking life and his sadness at the loss of his humanity should be engaging, but Louis is not an interesting character. He just mopes around. Rather than being sparked by his predicament, he’s just a boring and frustrating character.

Maybe this is partly Pitt’s performance as well – too withdrawn, too morose. Apparently Pitt hated making the movie (from the long hours of make-up, to the endless night shoots, to the boring character) and it shows in the movie. Pitt just can’t get engaged in the role, his matinee idol looks and rather dull speaking voice combining to make him look like a worse actor than he is. And then Louis keeps banging on and on about how depressed he is. In fact he bangs on so much you start to wonder why everyone – from Tom Cruise’s crazed Lestat, to Antonio Banderas’ ageless vampire – is so obsessed with him.

But then maybe it’s Louis’ looks eh? The film does wallow in the sensuality of sucking on people’s necks, and half the vampires in this seem to be campily metro-sexual. Cruise gives a surprisingly out-there performance of high camp hedonism and preening selfishness, so far out of his expected range that (while not brilliant) it reminds you he is a better actor than he gets credit for. Lestat clearly has a huge crush for Louis, and the orgasmic converting of Louis into a vampire leaves little to the imagination. Later Antonio Banderas as an effeminate, ethereal older vampire also seems to have a huge crush on Louis. The many vampire victims seem to succumb to erotic joy when they are bitten (at least until they die). Sex flows over the whole film, without the film itself ever actually being sexy, and the vampires are all pretty indiscriminate in their tastes.

Unfortunately this all too often tips into pure high camp. Stephen Rea, as a sort of vampire acrobat actor, gives a performance of superb silliness. Banderas lisps and wafts through the picture like a bizarre puff of perfume. Neil Jordan frequently explores the frame with ridiculous overblown action – no less than four times in the picture we watch scenes of operatic fire starting (often with vampires writhing in flamey pain) that suggest Jordan spent too long watching the fire sequence in Gone with the Wind before he made the picture. All the actors (aside from Pitt who barely shows up) dial it up to eleven with their performances, and the long-haired, long finger-nailed vampire representations here are like some sort of odd Halloween dressing up box.

Jordan’s film often trades dark, campy humour in favour of horror or thrills. There are no real jumps or scares in the picture, and the buckets of blood thrown around are more ridiculous than they are disgusting. In fact watching the film, I feel Jordan may have been torn between wanting to do something a little different (a sad vampire film about depression) and having to deliver the blood, guts and gore the genre fans wanted. Certainly, he fails to mine any real poetry from Anne Rice’s source material (although she loved the film, so what do I know) and for all the musings on the tragedies of living a life in the shadow you never really feel that moved by it.

There are however good things. Technically the film is very good. Cruise is surprisingly fun as the colourful Lestat. The film gets stolen by Kirsten Dunst as the physically young, mentally older Claudia, who struggles to find the balance between her teenage blood lust and her later disgust and fury at being trapped forever in the body of a child. But there isn’t enough good stuff among the tosh. Interview with the Vampire is an odd, actually rather bad film that is struggling to be a good one. It has a cast of 1990s heartthrobs who mostly enjoy dressing up and playing at their campy side. But it fails to really be engaging or make someone care about the story it is trying to tell.
Email ThisBlogThis!Share to TwitterShare to FacebookShare to Pinterest
Labels: 1994, Antonio Banderas, Brad Pitt, Christian Slater, Kirsten Dunst, Neil Jordan, Stephen Rea, Thandie Newton, Tom Cruise, Vampire film