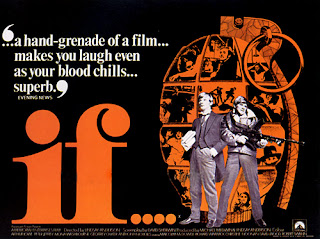 Lindsay Anderson’s If… emerged in the late 1960s, at a time of furious counter-culture reaction to the establishment. Only a few months before its release, Paris had been torn by student riots against everything from the government to class discrimination, which had sparked over a month of protests and strikes that consumed every part of society. If… was released in the midst of the aftermath to this event – and managed to capture the mood of Europe with an astonishing prescience.

In an unnamed English public school, “College House” is run by the senior prefects (“Whips”) who impose a harsh discipline upon the rest of the students. The head of house (Arthur Lowe) is an easily manipulated weakling, the school headmaster (Peter Jeffrey) is a well-meaning but distant figure, most of the staff are either bizarre, creepy, disinterested or all three. Mick Travis (Malcolm McDowell) and his friends Wallace (Richard Warwick) and Johnny (David Wood) are three persecuted lower sixth formers, who (particularly Mick) have a burning resentment for the structures and traditions for the school: a resentment that slowly builds towards outright rebellion.

Lindsay Anderson’s background was Cheltenham College followed by Oxford. Only someone so thoroughly grounded in the background of private education as that could surely have produced a public school film as furious as this one. The entire film is like a kick in the teeth. Anderson understands the cruel traditions and oppressive rules of public schools completely, and the entire film is awash with moments like this that govern school life. There is not a single, solitary moment where there appear to be any positives at all in the life at the school, or any educational benefits (the school is proudly focused on turning out “gentlemen”).

Anderson shoots all this with a careful eye for the surreal and flights of fancy. Much has been made about the black and white sequences that pepper the film. The natural light in the chapel caused the colour stock to be over-exposed, forcing Anderson to shoot the scenes there in black and white. However, Anderson loved the effect, and filled the film with scenes shot in monochrome to unsettle the audience and make them question the nature of what they are seeing. And that’s something you need to do with If…, as the film walks a fine tightrope between what is real and what is imagination.

While the film starts off grounded in a reality of cruelty and traditions, as it progresses it develops into something unusual and perverse. An extended sequence where Travis and Johnny skip school and head into town, steal a motorbike, drive to a country café and Travis seduces a Girl (Christine Noonan) becomes ever-more hyper real. Is the Girl even real? The speed of her seduction certainly seems to owe more to the boys’ adolescent fantasies of attractive women than any reality. In fact, the use of Noonan’s character (as sex object) is both a dated moment and an expression of the boys’ immaturity and fantastical longings.

The film is building of course towards the final act of rebellion: a firearms-laden shoot-out after the rebel boys discover a secret cache of automatic weapons on campus (this is in itself unlikely) and then proceed to machine gun visiting dignitaries and their oppressors from the roof of the school, who in turn return fire with their own machine guns. How much of this is real and how much is a flight of fancy from the students and from the film makers? It’s unclear – there is no consistency in the filming of this sequence. When does reality in the film start to cross over to fantasy? There are plenty of moments where this could be happening.

It comes down to the title of the film. If – is this Kiplingesque title suggesting the possibility of such things happening, or such things coming to pass in certain situations, rather than an actual reality? Anderson’s fury at the ghastliness of the class system in this country, and the institutions that promote it (the army, politicians and the church get the same short shrift) suggest a fantasy of bringing the whole system down in a violent outburst. It’s a fantasy, initially grounded in reality, that suggests a poetic realism with lashings of the surreal (most famously the reveal of the schools bullying and vile chaplain as living in a large drawer of a desk in the Headmaster’s office).

The film’s fury and counter-culture joy has the perfect lead actor in Malcolm McDowell, whose simmering, edgy anger as an actor, and chippy rage with a sneering sense of defiance, are perfect for Travis. I’m not sure if McDowell ever topped this first performance, one where he burns through every frame and brilliantly seems to embody every single cog in the system that wanted to thumb its nose at the boss (to mix some metaphors). Anderson and McDowell are clearly working in perfect sync in this film (they collaborated three more times on spiritual sequels). It's a beautiful performance of simmering resentment and fury at the hypocrisy around him.

The film’s exploration of the injustice of the school doesn’t feel outdated at all. The brutality of fagging and caning plays is like a darkly twisted version of Tom Brown’s Schooldays. Robert Swann is particularly good as leading Whip Rowntree, a hypocritical patrician, and memorable sequences capture the eccentric inadequacy of the teaching, the drilling of school rules into new students (brainwashing them into continuing the pattern in the future) and the arbitrary cruelty of the Whips. Peter Jeffrey’s liberal but distant and ineffective Headmaster is a perfect Thomas Arnold parody, a man with grand ideas but no knowledge of the actual school he is running, who claims to understand the boys but knows nothing about them.

However, interestingly, it’s the rebellion itself that seems rather dated today. In the 1960s, it was easier to whole-heartedly invest our sympathies in the counter-culture rebellion of Mick and his friends – but it’s harder today, with our climate of school shootings in America (there was one the day before I watched this film), to root for our heroes carrying out an indiscriminate shooting, for all the vileness of the institutions Travis is taking on. Of course this sequence is shot with a surreal eye (and I’m not sure any of it is meant to be an expression of something that is literally true, just spiritually true), but it’s a little uncomfortable today. 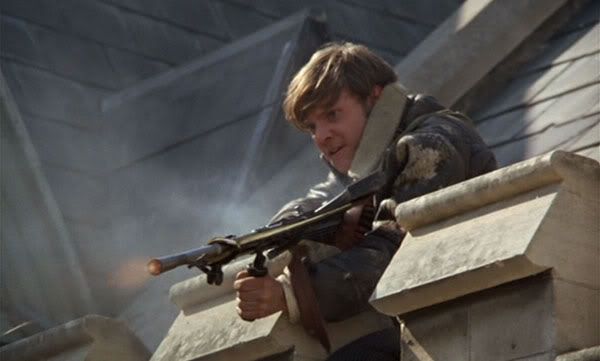 But at the time, this gut punch of a picture by Anderson wouldn’t have been troubled by these doubts. It’s a brilliantly directed film, that burns with a genuine fury against the institutions it is addressing. There is virtually nothing sentimental or kind about the film – it’s entirely about kicking against the tracks. Nothing in the school is redeemable or decent, everything is corrupt and twisted. It’s a sneering, burning, angry shout of a movie that manages to avoid preaching to the audience and instead presents its hellish vision of class in this country with a witty grace. If… is a film that perfectly captures the mood of the time and understands the “small world” culture of public schools like few others: it’s an essential classic.
Email ThisBlogThis!Share to TwitterShare to FacebookShare to Pinterest
Labels: 1968, Arthur Lowe, British Films, Lindsay Anderson, Malcolm McDowell, Mona Washbourne, Peter Jeffrey, Political satire, Social issues