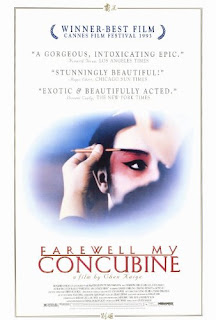 Chinese cinema isn’t well-known in the West. Maybe it comes from China so long being behind its own Red Curtain. Farewell My Concubine was pivotal to introducing Chinese cinematic culture to the West, winning a Palme d’Or and nominated for an Oscar. It’s surprising in a way, as Farewell My Concubine is a film that you almost need an intimate knowledge of Chinese history to truly appreciate (which I’m not sure I do!). But not surprising in another, as it is a glorious made, brilliantly acted and directed paean to the warmth of the human spirit.

Told over 52 years, from 1925 to 1977, the film follows two actors in the Peking Opera – Cheng Dieyi (Leslie Cheung) and Duan Xiaolou (Fengyi Zhang). Brought up in a brutally tough actor training school, the two become famous for their performances in the opera, Farewell My Concubine, about the suicide of a king’s concubine. Dieyi plays the concubine, while Xialou plays the king. The two actors are held together with a strong, almost unbreakable bond of brotherhood. But Dieyi also has a romantic longing for Xiaolou. Their relationship is made more complex after Xiaolou’s marriage to former courtesan Juxian (Gong Li) – but the three quickly find a relationship of tolerance, support and understanding that is tense but works. Around them China undergoes the Second World War, Japanese occupation, Mao’s seizure of power and the Cultural Revolution.

Kaige’s film is an epic that places an intimate and personal story at its centre and introduces global and national events which we largely understand from the perspective of our characters. This is a brilliant way of showing the seismic changes in China over this period – from the 1920s, which are so simple and Dickensian in their set-up that they might as well be the fifteenth century, to the increasingly brutal oppression of Mao’s regime. At the centre of all this is the relationship between the three core characters.

This relationship is almost impossible to define, so richly complex and human does it feel. It all rings immediately true – three people who are held very closely together by bonds of family, shared past and mutual dependency, but whose relationships are also rife with jealousies and regrets. Deiyi oscillates between vulnerability and guarded resentment against everyone around him. Xiaolou (brilliantly played by Fengyi Zhang, all warm-hearted charisma but easily led by others) is both annoyed and frustrated by Deiyi, but also goes to extraordinary lengths to protect him. Juxian (an enigmatic intelligent performance from Gong Li) at first seems to be a manipulative presence who wants to split the two of them apart, but comes to an unspoken accommodation with Deiyi that recognises they have a lot of shared interests and love.

All of this is simply beautifully done, subtle, un-obvious and brilliantly restrained, wonderfully acted by the three leads. Deiyi is a fascinating character, struggling with his sense of identity, trained from an early age to look and behave as much like a woman as possible. Is it any wonder that it has had an impact on his sexual identity? (The film’s openness about homosexuality – with Deiyi frequently being used for sex by his patrons – is one of many reasons it was nearly banned in China). Deiyi feels unable to express the feelings he clearly has, frequently falling back on imperiousness and pride. Leslie Cheung is just about perfect in this role: fragile, brittle but also harsh and unforgiving.

Kaige films all this beautifully in this visually striking film, using a host of brilliant images and wonderful lighting. The film’s opening hour covers the characters’ childhoods in the harsh training regime of the opera school, where beatings are common. Every character, by the way, accepts this as totally normal – in a striking later scene, the two adults meet their mentor again and immediately revert back to mutely accepting physical punishment for perceived wasting of their talent. One of the film’s striking commentaries on China in fact is the difference between their deference and the defiance of up-and-comer Xiaosi, who flat out refuses to take part in the harsh regime Deiyi tries to introduce and later becomes a leading light in the Cultural Revolution. It’s one of many ways the film uses the characters to demonstrate the changes in China.

The section covering the childhood of the characters is wonderfully done, a truly Dickensian series of events that will go on to define the lives and impressions of the two characters, skilfully built around the fate of a third friend – a more defiant joker who struggles far more to cope with the discipline of the camp compared to Deiyi’s stoic acceptance and Xiaolou’s matey deference. I truly loved this sequence and would happily have watched it for ever, every moment is so well observed, the child actors are marvellous and the claustrophobic world of the training school is immaculately observed (the outside world is so absent that the appearance of a car is actually a huge surprise as it makes you realise we are in the 20th century).

But then this is a film that is set in a small interior world, which shifts and changes subtly as the wider Chinese world moves around it. The Japanese occupation seems to come from nowhere, a sudden interruption of a world where the two actors struggle to please patrons. The continued re-staging of the opera Farewell My Concubine is striking for how little it changes, a still centre of artistic conventionality (and it is conventional – every moment is handed down from previous generations, with Xiaolou constantly criticised for using five steps at one point where tradition demands seven). The imperious patrons rise and fall around the actors, victims to a China which is shifting quicker than they keep up.

Kaige’s film also sharply criticises the excesses of the Cultural Revolution, that threaten this relationship and pressure the actors to denounce both themselves and each other. The Chinese government of Mao changes constantly in its views and demands, faster than many can keep up – and what is acceptable one year becomes a capital crime the next year. Deiyi is ordered to perform for the Japanese, and later nearly faces death for this. A patron pivotal in saving him is later a man condemned for having that kind of power. Welcome to China.

Farewell My Concubine works because it puts the sprawling history in the background of this personal story of the relationship between three characters who need each other in ways they can hardly understand, increasingly drawn together as fixed points in a changing world. When the rules of yesterday are the crimes of tomorrow, is it any wonder you cling closer to the few people around you who understand and remember what you were like and where you are from?

Deiyi, Xiaolou and Juxian are characters held together by bonds that seem unshakeable, which allow them to frequently anger and attack each other but constantly draw them back to each other to support and save each other. Kaige’s understanding of this – and his brilliant discipline in refusing to add moments of definition to the feelings between these characters, but allowing us to interpret and form our own opinions of how their relationship works – is brilliant, and Farewell My Concubine is a brilliantly made, fascinating and infinitely rewarding film.
Email ThisBlogThis!Share to TwitterShare to FacebookShare to Pinterest
Labels: 1993, Chen Kaige, Chinese films, Fengyi Zhang, Ge You, Gong Li, Leslie Cheung, Lu Qi, Ying Da