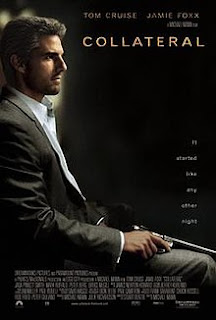 Tom Cruise enjoys throwing us film-goers curveballs every now and again. In Collateral he pops up as a sociopathic hitman, grey of hair and suit (like a buzzcut, rampaging John Major) leaving bodies strewn about the place. It’s great to see him in Michael Mann’s lean, very enjoyable action thriller, looking as sleek and soulless as the rest of LA.

Cruise’s Vincent is a hitman in LA to knock off a list of targets. But how will he get from hit to hit? Why by hiring a taxi driver for a night: risk-averse dreamer Max (Jamie Foxx) who has been working “temporarily” as a taxi driver while he builds plans for his dream limo business for a mere 12 years. Max is thrilled to have a big spender in his car – until something goes wrong on hit #1 and a body lands on his cab. Max no has no choice but to assist Vincent – although Vincent ends up becoming more attached to Max than he might ever have imagined.

Mann shot his film on a high-definition video and it gives a very unique look at LA, really capturing the hazy yellows and cool blues of the city and giving everything in the picture a slightly grainier, starker look. But that would count for nothing if the story of the film wasn’t pretty good, and Collateral is a very effective action thriller, which doesn’t reimagine the genre but offers more than enough freshness to enliven the familiar elements it’s made up from.

Its main assets (along with Mann’s cool, detached and pin-point sharp direction) are the performances of its two leads. Cruise is just about bang-on as a professional hitman, devoid of empathy, who finds surprising possibilities of friendship open in front of him. He’s a fascinating character, like someone who has spent so long studying people that he can just about replicate human reactions, without understanding the humanity behind them. Cruise’s obsessive preparation for his roles also help makes him flawlessly convincing as this lethal ubermensh.

Foxx however is just as good as a basically decent, friendly, low-key guy who is kidding himself that he is not drifting through life. It’s Max’s story we follow throughout the film – and it’s his sense of personal morality, his strict belief in right and wrong, that gives the film its dramatic force. Foxx also avoids undermining or laughing at Max, who is basically a man so buttoned up and cautious that (without a major push) he’ll clearly die of old age in that cab.

These two characters thrown together have a curious chemistry – a sort of riff on the casual bonds that can develop between driver and passenger as they talk about their lives, views and interests. It’s not a friendship – certainly not in Max’s case – but it’s a strange sort of bond nevertheless. Vincent, you feel, hasn’t talked to many people like this – and while he’s still willing to threaten Max or put him at great risk, he still develops a strange protectiveness about him. It’s this quirky and different relationship that powers the film and finally makes it unique. This odd couple don’t overcome boundaries to become bosom friends, but they also don’t come together as fierce rivals. Instead they sort of work out a co-existence in that cab.

It’s the most interesting thing about a film that otherwise – to be honest – deals a pretty familiar deck with confidence. Sometimes the film plays its cards so well you overlook them – the first time I watched it, I was semi-surprised at the reveal of the final victim, but really it should be pretty obvious to anyone who has seen a movie before. The plot is full of moments like this that are played with a freshness – or with a cunning – that stops them from feeling familiar.

But that’s really what it is. The journey around LA from hit-to-hit is a familiar sounding idea. The encounters between Vincent and the targets are pretty familiar – the exception being a fascinating, and hard to read, encounter with Barry Shabaka Henley’s jazz player turned informant, which sizzles with tension – and the action scenes, while well staged, are the sort of shoot-outs we’ve seen before. Mann shoots them with a vibrant excitement, but it’s mostly B-movie stuff presented freshly.

What it comes down to is that relationship between those two characters, and the skill of director and actor in drawing out subtleties in performance. (Don’t listen by the way to the director’s commentary, which ruthlessly strips these subtleties away as Mann bangs on about heavy-handed, predictable backstories which thankfully don’t make it into the movie, but make it sound dumber than it is). Cruise and Foxx are both fantastic, Mann’s direction of this sort of icy-cold, impersonal, dangerous city is impeccable and the film itself doesn’t fail to entertain.
Email ThisBlogThis!Share to TwitterShare to FacebookShare to Pinterest
Labels: 2004, Action Films, Barry Shabaka Henley, Bruce McGill, Irma P Hall, Jada Pinkett Smith, Jamie Foxx, Javier Bardem, Mark Ruffalo, Michael Mann, Peter Berg, Thrillers, Tom Cruise