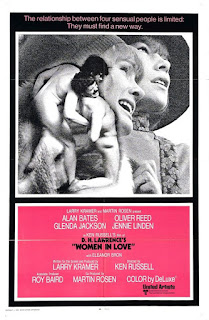 DH Lawrence is an acquired taste. While his writing is undoubtedly brilliant, reading his novels today it’s hard to shake off their sometimes histrionic melodrama – their revelling in all that (at the time) shockingly frank discussion of sex and all that Freudian analysis of fractured personalities against an alien industrial world. So perhaps there is a reason why one of the best interpreters of his work for the screen has been someone as melodramatic and envelope-pushing as Ken Russell.

Women in Love is Russell and Lawrence to the max. In a 1920s mining town, two sisters, Gudrun (an Oscar-winning Glenda Jackson) and Ursula (Jennie Linden) want to make their own way in the world. Local school inspector Robert Birkin (Alan Bates) wants to find perfect love and fulfilment. Alpha-male son-of-the-local-mine-owner Gerald Crich (Oliver Reed) isn’t quite sure what he wants, other than to reinvigorate his father’s business. Naturally all four of these characters come together in romantic, intellectual and sexual tangles that lead to a lot more misery than happiness.

Wow this is a difficult picture to write about. How so? Because it is about two-thirds masterpiece to one-third pretentious, hyperbolical nonsense. That’s quite some tight-rope. Russell walks it pretty well, but his problem has always been he loves being a sort of enfant terrible of British cinema too much. Too often he succumbs to temptation and pushes things a little further, to go for the demented camera or editing trick, or to push the sexual content a little bit further. The whole film has a hint of a cocky teenager, jumping up and down to look cool and catch your attention.

But then on the flipside, sometimes this excess really works (or if you like, sometimes more really is more). Nowhere is this clearer than in the famous naked wrestling scene between Oliver Reed and Alan Bates. It’s a highblown, tightly edited, single-camera, increasingly artistic sequence that leaves little to the imagination as we wonder how far this nude, willy-waggling, sweaty wrestling turned intimate clinch will go (the final shot sees the characters roll off each other and lie exhausted on a carpet, breathless, in front of a roaring fire). But it works so well because the amped up shooting and content really tells us something about these two characters, their relationship, feelings, viewpoints on life, sexuality – everything. It’s a great scene and it’s a sign of how good this film can be. 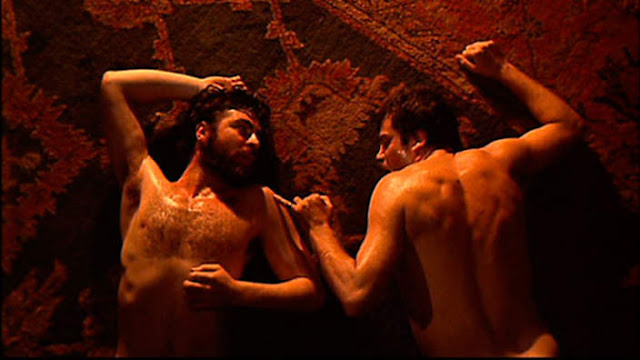 And then you get other moments where you sigh and roll your eyes and almost want to say “yeah Ken we get it…”.  As Robert and Ursula roll off each other after an intense sexual encounter in the woods, we cut immediately to two bodies found drowned in a lake, their bodies locked together in exactly the same position. Yup sex ‘n’ death. Gerald and Gudrun have sex, intercut with shots of Gerald’s mother. Other moments ape up stuff that was already pretty ridiculous in the book to the max: Birkin, after a bash on the head, runs naked into the countryside and smears himself with grass and mud and rolls in the dirt. For about three minutes.

But then this is the sort of film where Glenda Jackson tames some bulls by performing a bizarre dance. Why does she do this? Who knows (certainly not the characters). But then the film is full of moments like this. But what kind of makes it work, even when it is so ridiculously over-the-top and dated in its filming, is that there is a smartness in it. It is a film that does, underneath it all, have some profound thoughts about love and relationships.

It manages to bring together the themes that intrigued Lawrence with a bit of coherence. What do we want from life? It focuses overwhelmingly on the men of the story, and in particular Alan Bates (excellent) as Birkin. Made up to look like Lawrence, Birkin also carries a lot of the prose of the novel debating what makes us happy, whether we need equally strong bonds in our life with men and women, and what constitutes our completeness as human beings.

The film does this to a certain extent with the female characters as well – although we see them almost completely from the perspective of the men (which is interesting – maybe they were worried about making a film called Men in Love…). That’s possibly why Gudrun’s confused desires for Gerald never quite come into focus. Marvellous as Glenda Jackson is – surely an actress born to play this sort of part, marvellously passionate but strangely unknowable, vulnerable but harsh and even a little cruel – it’s hard to understand how Gudrun’s feelings change for Gerald. Maybe she doesn’t know herself. 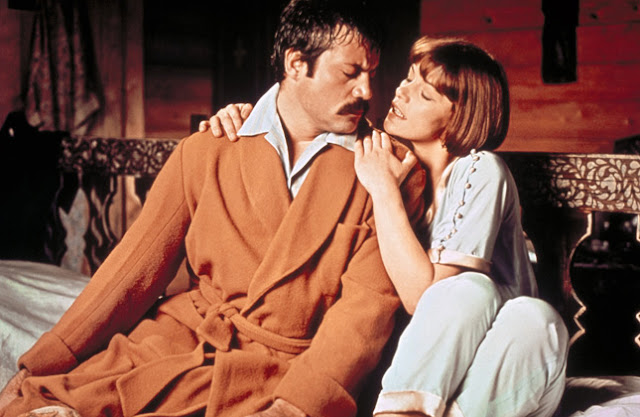 Gerald and Gudrun seem to be characters who don’t understand what they want (Gerald even expressly says it). That’s part of the point of the film (and Lawrence’s book) – a yearning, like both these characters have, for freedom and something different from previous generations, but unable to really put their finger on what this is. Gudrun wants a strong, dynamic man – but she also wants freedom and artistic fulfilment, and can’t find this with Gerald.

The film juggles these themes, of people struggling to reach an expression of (or to understand) their desires. Russell understands this – and for all the highblown eccentricity of some of the shooting, he sticks with a brilliant understanding of these personalities and themes. It remains a very caring movie that understands and relates to its characters. It has a lot of heart under the madness of Russell’s shooting.

And it’s superbly acted. Bates and Jackson are both marvellous, as is Jennie Linden in a (to be honest) rather thankless part as the second sister. But it’s a revelation of what a fine actor Oliver Reed could have been, if he had not decided to become a professional drunk. Reed drips charisma and intensity and he gives Gerald a real frustrated, sensual depth – a confused sexual fear mixed with a determined machismo. It’s a brilliant performance. The rest of the cast are also good, even if Eleanor Bron is (partly deliberately) overdone as Birkin’s first lover.

Women in Love is very dated in its style, but still a fascinating and intelligent piece of filmmaking that engages with and juggles with ideas. Despite all its overblown Russell excess, I actually really liked it, it stuck with me and I’ve been thinking about it since it finished. I’d actually like to see it again and see if it unlocks even more for me – and blimey it even makes me want to read Lawrence again, which after The Rainbow I never thought I’d say…
Email ThisBlogThis!Share to TwitterShare to FacebookShare to Pinterest
Labels: 1969, Alab Webb, Alan Bates, British Films, Christopher Gable, Eleanor Bron, Glenda Jackson, Jennie Linden, Ken Russell, Literary adaptations, Michael Gough, Oliver Reed, Vladek Sheybal