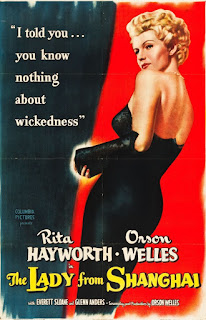 Orson Welles’ career is littered with coulda, woulda, shoulda moments. The Lady from Shanghai is perhaps the most telling lost opportunity in all his extensive CV of recut products and studio interference. Unlike Touch of Evil, there remains no trace of the footage removed from the film by the studio – instead we are left with the remains of the picture that escaped rejigging.

Michael O’Hara (Orson Welles) is an Irish drifter, who saves the glamourous Elsa Bannister (Rita Hayworth) from muggers in a park. Attracted to him (perhaps), as he is to her, she hires him to work on a yacht she and her husband, famed lawyer Arthur Bannister (Everett Sloane), are sailing around the coast. During the voyage, O’Hara is approached by Bannister’s business partner George Grisby (Glenn Anders) with a deadly proposition – and is sucked into a web of cross and double cross.

The Lady from Shanghai is an odd curiosity. At the time it was condemned by critics as a scarcely coherent film noir, struggling to involve the audience in its ins and outs. Today it’s seen more as a missed opportunity classic, which Welles nearly managed to turn into a landmark film before the studio heads recut the entire thing over his head. The reality is probably somewhere in between.

Welles agreed to do the movie for nothing, in return for funding for his stage production of a Cole Porter musical based on Around the World in 80 Days. Stories change depend on who you talk to, but essentially Welles agreed to do the first piece of work that was chucked his way – which happened to be this moderate plot-boiler. Welles shot a lot of the film with an imaginative eye and provided several fascinating set-pieces. But was he really that interested in the film?

It’s hard to say. Certainly it makes you wonder when you look at his rather disengaged performance. Welles (unwisely) takes on an Irish accent and basically feels distracted and bored throughout – as if he felt the whole thing was beneath him. O’Hara becomes a pretty bland character whom it’s impossible to really develop an affinity for. Welles hardly looks cut out for the fighting he’s called on to do – has an actor in a good movie thrown a less convincing punches in a scuffle before?

Because the rest of the film is fairly good, by and large. The plot is almost impossible to follow, but that is partly the point – the growing number of double crosses are designed to feel like we are spiralling down a rabbit hole with O’Hara. But it’s the style it’s told with – brash and exciting camera shots, and an edgy jaggedness in performance and storytelling that alternates with a dreamy sense of unreality. Welles throws this all the wall, but somehow manages to hold it more or less together – perhaps helped by the fact that he treated it like a slightly disposable piece of pulp.

The film’s final act culminates in an extraordinary shoot-out in a hall of mirrors, with characters replicated over and over again in reflection, lines of them appearing as if from nowhere. There is a quirky surrealness about this, with reflections superimposed over each other, or armies of a single character marching towards the camera. Bannister’s walking stick movement, stiff and awkward, also really helps here as he starts to look like a pack of spiders. 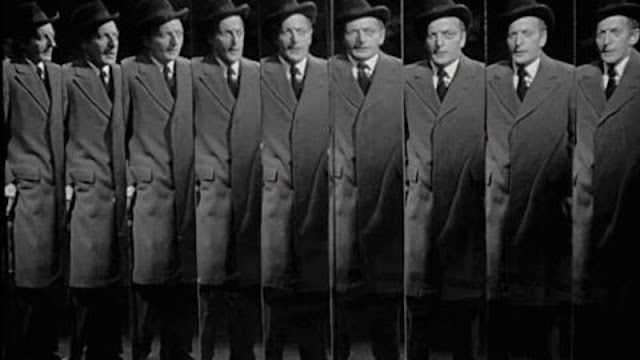 Of course Welles intended this sequence to be almost twice the length, but it was cut down by a bewildered studio. They also insisted that Welles insert a parade of close-ups of characters, in particular of Rita Hayworth, which was exactly contrary to Welles’ intention to use as many distancing long and medium shots. Welles’ original plan for the score was also ditched in favour of a rather flat, dull, traditional score.

But then there are the moments of exotic, heated sex that Welles managed to leave in. As our heroes sail off into the tropics, the bubbling sexual tension between O’Hara and Elsa boils over. It bubbles over into other relationships as well – does every man desire Elsa? Or are there other elements at play? The final offers for murder and money are almost deliberately hard to follow – is it all a summertime madness? As the plot becomes more and more odd, so the film begins to become more bizarre in its setting, finally heading into Chinatown and then an abandoned funfair.

Away from Welles’ weaker turn in the lead, there are some strong performances. Everett Sloane is fantastic as the sinister lawyer, propelling himself forward with walking sticks, his motives impossible to read. Glenn Anders is wonderfully slimy as a creepy lawyer, whose every line has some sort of cackling insinuation. Rita Hayworth brings a sexual charge to the film, mixing manipulation and genuine feeling.

These performances fit neatly into the film, which continues forward with its bamboozling plot. This story never quite engages the audience – and there isn’t quite enough in the film itself that has been left us to be sure that, even with the cut material put back in, it could have been a classic. But there are enough interesting notes in there to keep you watching – and the final sequence is extraordinary and haunting in its extravagant oddness. But I’m still not sure this is a major work – rather it seems to be a curiosity from a great director.
Email ThisBlogThis!Share to TwitterShare to FacebookShare to Pinterest
Labels: 1947, Box office bombs, Everett Sloane, Film noir, Glenn Anders, Murder mystery, Orson Welles, Rita Hayworth, Ted de Corsia