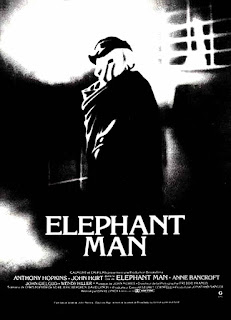 In the late 19th century, society was swept up in the story of a circus show freak, Joseph Merrick (renamed John here, as per Frederick Treves’ memoirs), saved from a life as a circus exhibit by Treves (a doctor at the London Hospital). Treves introduced him into society and formed a close friendship with him. Merrick died young (27) but his life became a sort of byword for struggling for dignity. The Elephant Man follows this journey.

John Hurt plays Merrick, with Anthony Hopkins as Treves, and the film is a pretty accurate reconstruction of the major events of Merrick’s life. The Elephant Man must have seemed like a strange proposition at the time. Produced by Mel Brooks! Directed by bizarro director David Lynch! About a man grotesquely deformed by nature! But what emerges put those doubts to shame, because this is a beautiful and emotional piece of film-making, guaranteed to put a tear in your eye. It’s an extraordinary and moving film, it’s almost impossible not to love.

In a career made up of playing characters who undergo enormous suffering, it’s fitting that one of John Hurt’s most famous performance sees him utterly unrecognisable under a mountain of make-up. (Acting in this was no fun either – Hurt worked alternate days to deal with the discomfort and stress, telling his wife “They’ve finally found a way to make me hate acting”). But what Hurt does here is extraordinary: under this mountain of make-up, the humanity, sweetness and tenderness of Merrick sings out. He’s a character you feel a total empathy for, with Hurt making him almost a gentle child, an innocent who learns to value himself and his own humanity. It’s mesmeric stuff.

Lynch’s film is all about the place Merrick holds in the world – and it’s not sure shy of showing it is one of exploitation and display. Sure, the circus life for Merrick is horrible under Freddie Jones’ freak-masker (Jones is magnificent here, alternating between weaselly, conniving, vulnerable, self-pitying and loathsome). But he’s plucked from this lower-class hell not for reasons of charity or loving care, but (initially) so that Treves can display him at medical conferences.

Even after demonstrating his sensitivity and artistic richness, Merrick is still rammed into a different treadwheel of society curiosity. Paraded before the rich and famous, his freakish appearance combined with his gentle, otherworldly, politeness and kindness becomes a new show in itself – something Treves himself (in a wonderfully played scene of introspection from Hopkins) slowly comes to realise. Alongside this, Merrick is still seen as fair-game by Elphick’s brutish night porter: if the hoi polloi can watch the freak, why can’t he parade him in front of working class customers at night? All this is intensely moving. 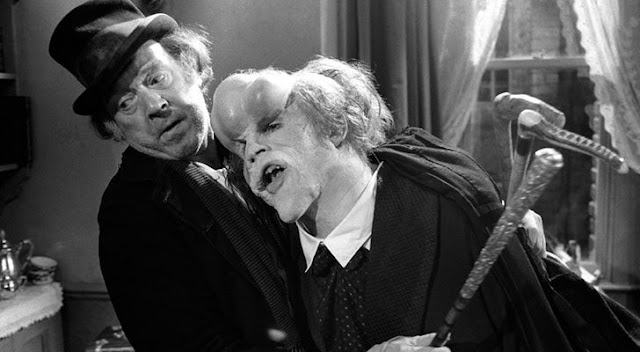 Does Merrick even realise that he is (in some ways) still a freak show, even while he collects photos of his new friends? The film is deliberately unclear: although it is clear that the (eventual) genuine friendship of Treves does lead Merrick to value himself as something more. The famous anguished cry (simply brilliantly played by Hurt) of “I am not an animal. I am a human being” after Merrick is chased into a train station bathroom by a crowd of scared and disgusted passengers is goose-bump inducing in both its sadness and its newfound moral force. From this point on, Merrick makes decisions for himself (for good or ill).

Lynch’s film walks a delicate balance around Merrick’s character and how much his life was a question of being exploited. Although the film does at times shoot Merrick with the slow reveal coyness of a monster movie, it never fails to regard him (and almost demand we do the same) with the utmost sympathy. In many ways, it shoots Merrick the same way people first seem him – a sense of shock followed by a growing appreciation that there is much more to see there than you might first suspect.

That’s what works so well about Lynch’s inspired direction here – this is a sensitive, haunting and poetic film that wrings untold levels of sadness from Merrick’s life. Lynch reins in his more arty leanings very effectively. In fact, once you get over the film’s bizarre opening of Merrick’s mother being attacked (sexually assaulted?) by an elephant, the film relaxes into a classical style mixed with Lynch’s chilling eeriness and his games with time and mood (the timeline is particularly hard to work out in this film), while his sensitive handling of the macabre is perfect for this film’s storyline. While it’s easy to see this as the least “authored” of Lynch’s film, it’s possibly one of his finest and sets the groundwork for some of his later works, exploring humanity in the bizarre.

He’s helped as well by Freddie Francis’ simply beautiful black-and-white photography which brilliantly captures both the grime and the shine of Victorian London, with an inky darkness. Francis also embraces some of Lynch’s expressionistic style, and shoots the film with a real atmospheric sensitivity. It’s about perfect – and Lynch brings the outsider’s view to London that sees the entire city with a brand new eye.

There are some sublime performances. Anthony Hopkins’ Treves is a masterclass in contrasted desires. He’s the sort of guy who can grab Merrick like a collector, but still shed a tear when he first sees him. Watching him slowly realise that he has used Merrick just as Bytes has done – within the confines of his Victorian paternalism – and grow to love him as a father does his son (feelings of course never expressed in words) is extraordinary. In the less flashy role, Hopkins powers a lot of the feelings of sadness the audience feel. Alongside him, a host of British legends do brilliant work, particularly Gielgud and Hiller as authority figures who slowly reveal themselves to have huge depths of compassion and understanding.

And what you end up with is a marvellous film. Brilliantly made, wonderfully filmed and hugely emotional with powerful, heartfelt performances from Hurt and Hopkins among many others. It’s extremely beautiful, and stirs the emotions wonderfully. You would struggle to get to the end of the film and not feel overcome with the final few moments, its sadness and the sense of regret. It’s possibly the most heartfelt of Lynch’s films – and also the one I enjoy the most.
Email ThisBlogThis!Share to TwitterShare to FacebookShare to Pinterest
Labels: 1980, Anne Bancroft, Anthony Hopkins, Biography, David Lynch, Dexter Fletcher, Freddie Jones, John Gielgud, John Hurt, Michael Elphick, Wendy Hiller