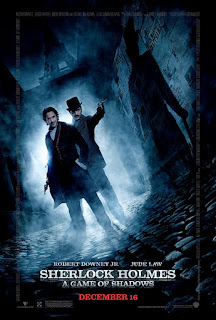 Sequels are tricky beasts. You need to work out what people liked about the first film and double down on it, while also expanding the story in new and exciting ways. When I first saw Sherlock Holmes: A Game of Shadows in the cinema, I was very sceptical about whether this film managed that. But actually, viewing it a second time around (and almost seven years later), I enjoyed it a lot more than I remembered.

As Watson (Jude Law) prepares for his wedding to Mary Morstan (Kelly Reilly), Sherlock Holmes (Robert Downey Jnr) is consumed into an investigation targeting the “Napoleon of Crime” Professor James Moriarty (Jared Harris). A series of bombings across Europe is being blamed on anarchists – but is it in fact a scheme launched by Moriarty’s military-industrial complex to instigate a world war (from which he can make a profit)? Well what do you think?

Sherlock Holmes: A Game of Shadows doubles down most strongly on the relationship between Holmes and Watson. Recognising that the things from the first film everyone loved was the brotherly banter between these two, the sequel places it front and centre. While the first film felt the need to introduce a traditional love interest for Holmes, this film kills off Irene Adler in the first few minutes (despite this, poor Rachel McAdams has better material here than most of the first film). Instead the true “romantic” relationship of the film is Holmes and Watson, as they banter, bicker and make huge sacrifices to protect each other.

It’s helped again by Downey Jnr and Law’s excellent performances and their strong chemistry. Saying this, the first half hour of the film thinks it’s funnier than it is, with its intermixing of Watson’s stag night with a series of Downey fights. There is a little too much brashness to it early on, without sufficient grounding in the warmth between the two characters. But once we hit the real action 40 minutes into the film, the balance between comedy, affection and peril is pretty effectively met.

And Ritchie directs some very fine action sequences here. There is an extraordinary sequence of a chase through the forest, which uses an exquisite mixture of hand held cameras, Steadicam, slow motion and half a dozen other tricks to deliver a series of striking and immersive shots. Yes it’s overblown and in-your-face but it works perfectly. The film is crammed with brash, powerful action scenes like this that really strike you between the eyes. 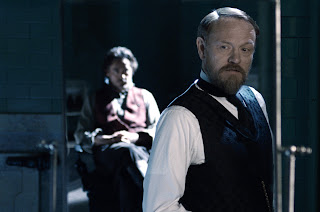 It also still keeps in touch with the original novels in a nice way. Some of the best dialogue scenes are those between Holmes and Jared Harris’ muscular but serpentine Moriarty (Harris is very good, a far stronger villain than the first film). These scenes use dialogue from the original stories extremely effectively. Meanwhile, its build towards its version of the Reichenbach fall is actually very clever, one that twists on the movie’s “calling card” of Holmes predicting every move of a fight before it begins by having Moriarty pull the same trick (which is in itself a neat scene).

Where the film does fall short amidst all this action and explosions and jokes (some good, some bad) is that we don’t get much in the way of investigation or deduction. There is a bit of sleight-of-hand and a touch of pocket picking, but most of the “deductions” are based on highlighting with the camera or dialogue objects that might as well be labelled “Important Plot Device”. Holmes doesn’t so much as investigate here as charge head first from one combat sequence or dangerous situation to another. There isn’t a lot of patience in his method here – and not a lot of patience in the film itself. But then this film is largely based on The Final Problem, probably one of the least "detective" of the stories in the cannon.

But Game of Shadows is very good fun, has some neat action sequences, is well shot and is more or less entertaining, even if some of the comedy suggests it’s a little too pleased with itself. Sure it loses some of the smaller-scale delights of both the books and original film in its rush to make sure you are wowed. But I enjoyed it a lot more the second time round, since I’d watched the original film more recently and was tuned up into what it was trying to do.
Email ThisBlogThis!Share to TwitterShare to FacebookShare to Pinterest
Labels: 2011, Eddie Marsan, Geraldine James, Guy Richie, Jared Harris, Jude Law, Kelly Reilly, Noomi Rapace, Paul Anderson, Rachel McAdams, Robert Downey Jnr, Sherlock Holmes, Stephen Fry