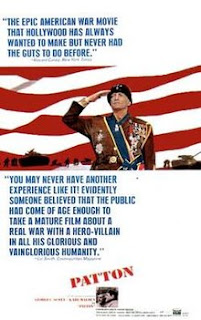 Patton was garlanded with eight Academy Awards in 1970, but rarely seems to get a mention when people list landmark best pictures. This is unfair, as Patton is a marvellous, intelligent, professional piece of film-making that rewards re-viewing: not least because, in George C Scott, it has one of those performances you simply must see, an extraordinary melding of actor and real man to such a great extent many people can’t believe they are seeing the real thing when watching newsreel footage of the actual Patton.

Patton is nominally a war film, but it’s actually an intriguing character piece. It follows the career of General George S Patton (George C Scott) during the course of the Second World War. Patton was a soldier’s soldier, a dyed-in-the-wool military man with a warrior’s instinct and a poet’s soul. The sort of man who berated men for not wearing proper uniform, then astounded them with thoughtful reflections on classical history. The film charts his command in Africa against Rommel, the invasion with Sicily (and feud with British counterpart Bernard Montgomery), his benching after striking a soldier suffering from shellshock in a military hospital, and his command of the Third Army during the Normandy invasion, including his pivotal role in the Battle of the Bulge.

With a script co-written by Francis Ford Coppola and Edmund North (later president of the Screenwriter’s Guild), Patton was a warts-and-all portrait of one of America’s most famous generals that came out amidst the country’s growing disillusionment with Vietnam. It was embraced by both sides of the argument because it very skilfully walks a tight-rope: for the hawks, there is enough of the “if we had more like him …” stance. For the doves, the film doesn’t shy away from Patton’s egomania, lack of tact and love of war (he even strongly advocates immediately turning on Russia – ‘cos they’ve already got all the men in Europe anyway – which you can interpret as visionary or insane depending on which side of the fence you are on).

At the centre of everything, George C Scott is quite simply a force of nature as Patton – I don’t think it’s an exaggeration to say this is surely one of the greatest Best Actor winning performances ever. Patton is in nearly every scene, and even the one’s he’s not in he’s the subject of every conversation, and Scott totally dominates the movie. You can’t put your finger on it, but he quite simply becomes Patton. It’s extraordinary, but the actor totally disappears and you feel you are watching some remarkable act of resurrection (fitting since Patton had a profound belief in reincarnation).

Scott’s Patton rages, he shouts, he goes into fits of childish egomania – but he’s also sensitive, intelligent and poetic. He can write a touching letter to the bereaved mother of his adjutant, expressing his sorrow, but also write how tragic it is that he will miss the wars to come. Scott is ramrod in his posture, and more than embraces the theatricality of Patton himself – when an adjutant tells the General sometimes his soldiers don’t know if he’s joking or not, the General softly replies “It’s not important for them to know. It’s important for me to know”.

It’s easy to eulogise over Scott at the expense of all else – but the film is so focused on Patton that he is intrinsically linked with the film’s success. The film is episodic, but every scene tells us something different about the man. Although since the film starts with one of the greatest opening scenes in movie history, we feel like we pretty much know him from the start.

It opens with an enormous American flag, in front of which Patton emerges in full dress uniform to encourage new soldiers to do their duty and, most of all, to “remember that no bastard ever won a war by dying for his country. He won it by making the other poor dumb bastard die for his country.” Scott famously refused to do this scene when told it would open the picture, as he felt nothing else in his performance could emerge from its shadow (they eventually told him it would go later in the film – no word on how he responded when he first saw the film!).

In a nut shell you get the whole movie. Is the giant American flag ironic or does the film really mean it? Patton is both strangely terrifying and also awe-inspiring, charisma, determination and force seeping from every pore of his body. Scott nails every detail of this speech, just as he nails every other part of the performance, while the camera work reinforces his mythic status (or his hubris depending on where you stand) as a symbol of Americana.

Schaffner’s direction of the film is easy to overlook, largely because it is refreshingly unflashy. It’s superbly professional –not a single scene falls flat. He marshals each scene with extraordinary effect, and manages the film’s difficult balancing act of sly satire and hagiography brilliantly. He also, within an epic canvas, works very well with actors – there are a host of great cameos in here, not least from Michael Bates as a preening Montgomery and Edward Binns as an exasperated Bedell Smith. Karl Malden is the only other really major character as Patton’s junior (later commanding) officer and he is perfect as thehonest professionalism in contrast to Patton’s flash.

And the film gives us plenty of Patton’s flash. The man who loved war and combat, also loved performing – and does so with abundant skill. But the film isn’t afraid to show his warts: in Sicily he threatens to sack a general who refuses to risk his men’s lives on a risky operation, primarily motivated by Patton wanting to reach Messina before Montgomery. Later, when striking the scared soldier, his actions are tough to watch even as part of you sees his point about other men having been wounded in the line of duty (the playing of the soldier as a teary whiner probably doesn’t help). The film never fails to show that Patton’s worst enemy is his own arrogant lack of thought – he constantly shoots his mouth off with no thought for the impact.

The film is brilliantly constructed. The photography is excellent, the editing superbly marshals a long film of many individual scenes into a story that seems a lot tighter and forward moving than it probably is. Schaffner makes us feel we go on a clear journey with this character – helped as well by Jerry Goldsmith’s excellent score that conveys a great deal with ancient mythic weight, playing off Patton’s own belief in resurrection.

Patton is often forgotten a bit – but it is a great film, well made, brilliantly balanced, wonderfully written and directed. And at its centre: what a performance. George C Scott is simply astoundingly brilliant, completely transformed into the old general. His Oscar (which Scott declined, thinking awards phony) was as well-deserved as these things get. A wonderful film, a true epic, and a marvellous character study of an enigma – it deserves to sit near Lawrence of Arabia in the personal epic stakes (to which it has more than a few similarities).
Email ThisBlogThis!Share to TwitterShare to FacebookShare to Pinterest
Labels: 1970, Best Picture, Edward Binns, Franklin J Schaffner, George C Scott, Karl Malden, Karl Michael Vogler, Lawrence Dobkin, Michael Bates, Paul Stevens, Peter Barkworth, Siegfriend Rauch, War film, World War Two