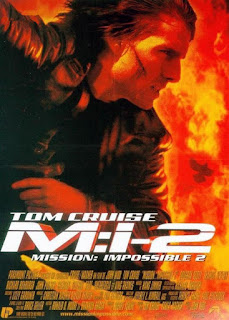 Okay. I love this franchise. Always have. But every franchise has its misfire right? Its Phantom Menace? Ladies and gentlemen: welcome to this total turkey. Can you believe this was the biggest box office hit of 2000? Has anyone watched it since then? Did anyone like it even then?

Anyway, the plot for what it’s worth, plays like Hitchcock’s Notorious if it had been roughly humped after a drunken dinner by The Fast and the Furious. Ethan Hunt (Tom Cruise) has to recruit the bizarrely named Nyah Nordeff-Hall (Thandie Newton), a society catburgler and sort of hot Raffles. Why? Well of course her ex-boyfriend and rogue MIF agent Sean Ambrose (Dougray Scott) has pinched a deadly virus and we need her to get back into his bed and trust to find out more so MIF can pinch it back before it hits the market. She’ll be ready to deceive a man though because “she’s a woman, she has all the training she needs” – or so says Anthony Hopkins’ half-asleep Mission Commander.

Mission: Impossible 2 barely has a plot though. Rarely has a film looked more like a story loosely written around some pre-determined action set-pieces. Much as I like Tom Cruise, no film looks more like a cocky vanity project than this one. The camera lingers on Cruise’s chiselled torso and general macho physicality like a lovestruck teenager. Remember when the MIF was a team organisation? Not anymore. Cruise is now a one man army, who barely needs the help of his two sidekicks (the job of one is to press keys on a computer, the other flies a helicopter. That’s it).

So the whole film is about making Cruise look good. From punching, to climbing freestyle up a cliff, to flashing the famous grin, to driving cars and bikes really fast, the whole film is blinded by his smile. Poor Thandie Newton and Dougray Scott can only watch as the Cruiser bestrides the film like a colossus, creeping about to find themselves dishonourable graves. Both performers are crushed by the weight of Cruise’s ego and the film’s front-and-centering of it. Newton can barely raise her performance above balsawood. Poor Dougray Scott not only gives an utterly bland performance, but was stuck on the set for so long by production delays he had to pull out of the first X-Men film, giving his role of Wolverine to an unknown West End actor by the name of Hugh Jackman. Ouch.

Perhaps as a reaction to the first film being seen as too confusing (it really isn’t…) the plot is almost laughably simple, verging on pointless. The film homages (rips off) other, way, way better films everywhere you look. So we get flirting-through-racing-fast-cars from GoldenEye. We get the almost the whole plot of Notorious with the woman sent to spy on her former lover by a handler who is now in love with her (the film even has an extended racecourse sequence). “I will find you” Cruise bellows at Nyah at one point like a low rent Last of the Mohicans. It doesn’t help that the film sounds like the writers spent about five minutes on the dialogue: “Damn you’re beautiful” Cruise tells Nyah. Well, be still my beating heart. This shit was penned by the writer of Chinatown for fuck’s sake.

The slight plot could probably be comfortably wrapped up in about an hour, if it wasn’t for the film’s constant (embarrassing) use of slow motion at every conceivable opportunity. I guess it’s meant to add style and depth, but it’s actually crushingly annoying and often gives us laughable moments (none more so than Cruise walking past a flaming doorway in slow motion for no reason). You just want to tell the film to get a bloody move on.

But then that is part of the John Woo style. Hard to believe this style of shooting an action film was once considered cool beyond belief. It looks so pretentiously, artily, self-importantly, thuddingly dull now. There are a huge number of action scenes here but none of them are particularly exciting, and none of them hugely memorable. There is a bit with a bike, a bit with cars, a shoot-out in a base, an infiltration of a big building. Yawn. Perhaps because Ethan Hunt feels less like a human, more like an empathy-free, ego-mad super soldier, it’s hard to care. In every other film, time is invested to make him appear human – here he’s an asshole who forces a woman to give her body for secrets, grins like a lunatic and slaughters people left, right and centre. It’s like he’s been given an arsehole upgrade from the first film (the third film would correct all this).

The film has no humour whatsoever. It’s po-faced and serious and desperately in love with itself. I keep banging on Cruise, but I think I do blame him. Other than Hopkins, no one in the film can compete with his charisma which feels like a deliberate choice. Every single memorable thing in the film is done by him. No other character is allowed to contribute anything to the resolution of the problem. On top of that every character seems to have a Tom Cruise mask – meaning Tom also gets to play at least three other characters as well.

John Woo shoots all this with a tedious flashiness that is completely empty. Logic is left lying battered and bruised on the sidewalk. By the time we get to the final resolution, we are desperate for Nyah (who has been used for sex, humiliated and infected with a deadly virus) to tell Cruise to get stuffed. Instead (after watching him gun down a pliant Sean Ambrose, who is never allowed to appear as a worthy adversary) they go on a sun dappled date in Sydney, with Cruise all but turning to the camera to wink. “Don’t you wish you were me?” he seems to be saying. Christ I really don’t.
Email ThisBlogThis!Share to TwitterShare to FacebookShare to Pinterest
Labels: 2000, Anthony Hopkins, Brendan Gleeson, Dougray Scott, John Polson, John Woo, Mission Impossible, Radé Sherbedgia, Richard Roxburgh, Terrible Films, Thandie Newton, Tom Cruise, Ving Rhames