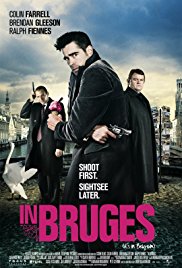 Who hasn’t been dragged somewhere for sightseeing and culture, and longed to be somewhere else (anywhere else?). Most of us right? So how many of us are hitmen hiding out after a job gone wrong? Probably not that many (I hope!). It’s this mixture of the everyday and the bizarre that Martin McDonagh nails so well in his debut film, a sharp as nails, laugh-out-loud but also moving piece of work, possibly one of the sharpest written, well-made debut films you’ll find.

Ray (Colin Farrell) and Ken (Brendan Gleeson) have been sent to Bruges to hide out for a few weeks after a job gone horribly wrong in Dublin. Ken is fascinated by the city, its culture and buildings and enthusiastically buys a guide book. Ray responds like a surly, miserable kid and is desperately unimpressed with everything he sees. Their long weekend in the city becomes increasingly unusual and dangerous as they encounter angry tourists, a racist dwarf (Jordan Prentice) and a drug-dealing film assistant (Clémence Poésy), and dodge the rage of their boss Harry Waters (Ralph Fiennes).

In Bruges is a hilarious piece of film-making, with every scene featuring some moment of black humour, wry observation or un-PC laugh-out-loud comedy. It’s foul-mouthed, sometimes violent, very rude – but also deals with profound feelings of guilt and regret with a real humanity. McDonagh’s work expertly combines jet black comedy, with a warmth for its deeply flawed characters. It’s got a compelling, masterful story that packs character development, incident and intricate plot threads together with assured expertise.

McDonagh’s gift is to make you relate for all of these characters, all of whom are made to feel very real and human. It skilfully leads you to overlook their many flaws and embrace them as people. It says a lot that the most sympathetic, likeable person in the film is a multiple murderer with an (implied) cocaine habit. Everything we learn or see about the characters is designed to make us understand and relate to them more.

Ray initially seems little more than a foul-mouthed thug. But as the film progress – and thanks to Colin Farrell’s masterful performance of brashness covering deep insecurity and vulnerability – we learn he is a rather sweet, even loving man who has stumbled into a career he is deeply unsuited to. Farrell gets these switches perfectly – and his childishness is hugely endearing. From stropping around like a sulky teenager to bouncing up to a film shoot with a childish, excited shriek of joy, he defies expectations. McDonagh throws in a perfect note of tragedy once we find out the mistake Ray made – and suddenly Farrell’s performance overflows with guilt, self-loathing and an unbearable regret that makes you re-evaluate everything you’ve seen him do.

But then that is the whole film right there: it makes you laugh uproariously, then chucks you a curveball and before you know it you are hugely emotionally invested, with a huge sense of empathy for their slowly revealed depths. That goes for every character – even the nominal villains have a sadness, or a firm set of principles, or a certain dignity to them that makes you care. It’s a brilliant piece of writing and directing – and masterfully acted.

Brendan Gleeson plays the other lead in Ken: and few other actors could surely have managed to turn Ken into such a warm avuncular figure, a gentle giant who feels he has come to terms with his choice of career but experiences a subtle shift over the course of the film. Gleeson’s performance is sublime, warm and witty with a careful thread of sadness underneath it – it’s some of his best work. 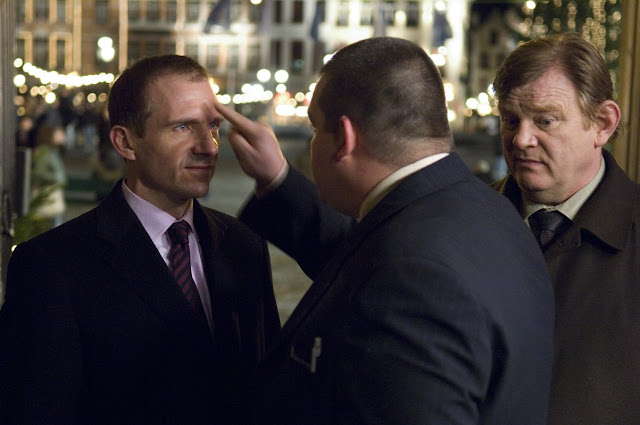 But then the whole cast is great. Prentice’s bitterness as the angry Jimmy is brilliant – and he is very funny – while Poésy’s gentle bad-girl is a terrific, radiant performance. The film also has third act dynamite with Ralph Fiennes’ Harry Waters, a foul-mouthed, furiously angry, tour-de-force character who shakes up the whole film – but who has a strange sense of nobility about him, even while he is (hilariously) effing and blinding left, right and centre.

And the film has a brilliantly anti-PC vein of humour. Jokes about drug-taking and dwarves. Foul-mouthed gags about every subject under the sun. Brilliant encounters with “large” American tourists (brilliantly paid off later in the film), jobsworth ticket sellers, angry tourists in restaurants – the film is crammed with hilarious moments. All of it is brilliantly funny because it comes naturally out of characters who feel real.

It’s also so thematically rich. As the characters stand in front of Hieronymus Bosch’s The Last Judgement, you realise that the entire film is a metaphor for purgatory, with Bruges’ medieval beauty carefully chosen to reflect this. Our heroes, laden down with sins, wait in Bruges for an unspecified length of time to discover where they will head next. Amends have to be paid, sins have to be reconciled – and all these threads come together brilliantly in a final, dream-like sequence that you suddenly realise the whole film has been carefully building towards from the start.

So the film, after a scabrous, brilliantly hilarious, darkly foul-mouthed start, slowly becomes something which (while still hilarious) is also a discussion of morality, principles and guilt. We see characters do things we might never have imagined them doing at the start, some are redeemed, others make principled decisions. And it’s really funny. I’m not sure Colin Farrell or Brendan Gleeson will ever be better than they are here. It’s a brilliant play script turned into a wonderful film. A classic.
Email ThisBlogThis!Share to TwitterShare to FacebookShare to Pinterest
Labels: 2008, Brendan Gleeson, British Films, Clémence Poésy, Colin Farrell, Comedy, Jérémie Renier, Jordan Prentice, Martin McDonagh, Ralph Fiennes, Thekla Reuten, Željiko Ivanek