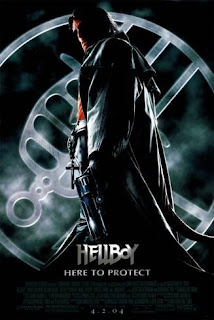 As little as 10 years ago, outside a few core characters like Batman, the X-Men or Spiderman, comic book movies were an odd curio hard to place in the mass market. Today of course, you can virtually get any character who has appeared in a cartoon strip up on the screen with a budget of millions. But back in 2004, Guillermo del Toro had to squeeze this project out on a smaller budget in order to get the studio to agree to make the film.

Hellboy has a particularly demented story. In 1945, the Nazis, working in partnership with Rasputin (Karel Roden) – yes that Rasputin, don’t even ask – attempt to open a portal to hell to, well I’m not quite sure what they want to do, but it probably involves the destruction of the world. Anyway, some humble GIs stop them and the only thing that comes through the portal is a little demon with an enormous stone fist. Raised by paranormal expert Dr Trevor Bruttenholm (John Hurt), this creature grows up into cigar-chomping secret-agent-for-the-FBI Hellboy (Ron Perlman), working on paranormal investigations. But when Rasputin returns from the dead it looks like all hell (literally) is about to break out.

Okay it should be pretty clear to you from that that Hellboy is an odd film. It’s very much from del Toro’s B-movie heart, and he invests this nonsense material with a great deal of directorial style and heart – a real “geek-boy-artist” job. Del Toro has a great deal of imagination and is able to strike a happy balance between enjoying the material and not taking it all too seriously. So he lets the film barrel along, throwing plenty of nonsense at the screen without worrying about trying to make it make real-world sense. In fact Del Toro is clearly so fond of the material that he basically shoots the whole thing like a comic book come to life.

So the film is crammed with bright primary colours mixed with murky blacks, and Del Toro frames many key moments like comic book panels. It’s a film packed with striking images and scenes built around stuff that feels like it should teeter over into ridiculous camp all the time but never quite does. Its steam-punky styling instead manages to feel somehow both strikingly original visually and also strangely packed with integrity – like Del Toro made a very personal big-budget movie for his childhood, the sort of bizarro cult film that’s actually-quite-good and it’s going to win a huge following once people can find it for themselves (which is indeed what happened).

Del Toro’s other great principled stand was to ensure that Ron Perlman played the lead. Hellboy is a bizarre character – over six feet, red, horns, a tail – but what Perlman and Del Toro do so well is to make him some sort of Brooklynish chippy blue-collar worker with a kitchen-sink earthy wit. Perlman is clearly having a whale of a time playing this temperamental demon like some sort of longshoreman Han Solo, a brattish teenager and rebel with a world-weary cynicism. He’s crammed with contradictions (the demon who fights for good!) that Del Toro is keen to explore – and makes consistently interesting.

Because he’s such a different character, he energises a fairly traditional story and his character’s pretty standard personal-struggle-plotline (will he do the right or the wrong thing?). Perlman juggles all this really well, and gives a performance that is both dry and funny but also has moments of real heart and emotion. He even manages to sell his rather possessive love for Selma Blair’s (also pretty good) fellow orphan with pyrotechnical abilities as something heartfelt and caring, despite the fact that at one point he basically stalks her. It’s a rather wonderful performance.

The rest of the cast are a bit more of a mixed bag. Rupert Evans is saddled with the audience surrogate role – asking the questions we can’t ask – while Karel Roden’s lipsmacking performance as Rasputin never quite engages as a villain. Stronger roles come from Jeffrey Tambor as an officious FBI director and especially from John Hurt as Hellboy’s father-figure, the kind of quintessential ageing mentor that you can imagine his wards adoring.

The rather silly plot doesn’t really matter. The importance here is the gothic chill of Del Toro’s style, mixed with his crazy “larger-than-life” dark comic book tone. And it works really well: the film is fun and witty, and if the storyline never really feels like it earns the “end of the world” threat (and builds towards an uninvolving duking out with a giant CGI monster), there are enough enjoyments along the way to make you want to make the journey.
Email ThisBlogThis!Share to TwitterShare to FacebookShare to Pinterest
Labels: 2004, Comic books, Cult movies, Doug Jones, Guillermo del Toro, Jeffrey Tambor, John Hurt, Karel Roden, Ron Perlman, Rupert Evans, Selma Blair