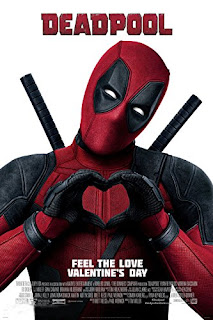 One day (soon?) we’ll reach critical mass with comic book films. Eventually, when every single character who’s ever appeared in a frame of a DC or Marvel comic has appeared on the screen, we’ll surely wonder if we will ever see anything new again. Some may already feel this, so perhaps that explains why Deadpool, which, for all its faults, is a comic book film doing something different, made such a big impact.

Wade Wilson (Ryan Reynolds) is a mercenary who meets and falls in love with Vanessa (Morena Baccarin). Discovering he has terminal cancer, he leaves her so she does not have to watch him die, and signs up to a gruesome medical procedure designed to bring out dormant mutant genes that may cure him. It works but leaves him hideously deformed. Wanting revenge, he names himself Deadpool and hunts for a cure to his deformity – scared Vanessa would reject him without it.

What Deadpool does well is wittily flag up the familiar tropes of comic book movies. The film in fact follows each trope to the letter – but at least it has a foul-mouthed cheeky commentary. The big question you have to ask is, can a film really be that smart and different if it basically does something very traditional? If I tell you I’m going to perform a tired magic trick you’ve seen before, but I’ll do it while pointing up every single cliché of delivery, with panache, does it matter the magic trick is still as tired as I said it was at the start?

That’s what Deadpool is – the same old ideas, re-packaged in a different way, so juvenile and cheeky that for a beat or two it feels like something new, which it manifestly isn’t. It might not take itself seriously, but it also doesn’t really develop into something unique. The film opens with a neat comic riff on credits, listing not the actors but their generic character traits (“Love Interest”, “Brit Baddie”, “Comic relief” etc. etc.) – sure this is funny and smart, but doesn’t change the fact that the characters themselves are exactly that.

Deadpool is a faux-clever film. It’s a cheeky piece of college humour: an X-Men film with swearing, sex, fourth wall breaking and gags about other films. There is a sort of witty enjoyment from Deadpool reminding us he knows he is in a movie. But most of the time, he basically behaves exactly like dozens of other lead characters in dozens of other films: he has an emotional arc of fear of rejection and embracing who he is that you’ve seen so many times before.

But the market is so saturated with films like this that the difference of presentation makes you feel for a moment you are seeing something new or clever – rather than essentially a very high budget, end-of-the-pier routine full of cheeky humour. Much of this is pretty funny by the way, but don’t kid yourself that it’s anything clever. And I don’t really think many of the gags here would stand up to repeated viewing – it’s basically just swearing and shocks. The writing is not great, its punchlines and shock beats giving the illusion of intelligent scripting.

Most of its success (in more ways than one) comes down to Ryan Reynolds. Reynolds campaigned for the film to be made for nearly a decade, and he totally nails the character. He thought up many of the best gags, and delivers the entire thing with whipper-snapper quickness and likeability. He gets the balance generally just right, and lands all the film’s big laughs. He’s very good.

But it’s an elevation of material that plays at being clever, while really just being an effective repackaging of the same-old, same-old. Remove the jokes and everything you would expect from a superhero origins story is present and correct.

So maybe everyone was a little tired of the same old, same old from Marvel et al and wanted something different. That’s the explanation I can think of for why a pretty average film ended up so damn popular. The action when we get it is pretty good, there is some imagination behind the cameras, but it’s basically a teenager’s idea of the best film, like, ever rather than an actually very good film. It’s not reinventing the wheel, but it puts a nice shiny new tyre on it.
Email ThisBlogThis!Share to TwitterShare to FacebookShare to Pinterest
Labels: 2016, Comedy, Comic books, Ed Skrein, Gina Carano, Leslie Uggams, Morena Baccarin, Ryan Reynolds, Superhero, Tim Miller, TJ Miller