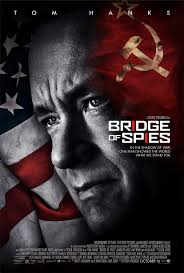 Steven Spielberg is perhaps best known for his cult block busters – and has indeed directed some of the finest popular adventure movies you are likely to see. But more of his output – particularly in recent years – is focused on intelligent, slightly old-school, handsome, period films that look to shed light on political and social issues of the past. Bridge of Spies falls firmly into this camp, an extremely well-made (if rather dry at times) prestige picture, blessed with a fascinating story and some very fine performances.

In 1957, Soviet agent Rudolf Abel (Mark Rylance) is arrested in New York and put on trial. He’s the most unpopular man in America – except perhaps for the man plucked from a list of New York attorneys to defend him, James B Donovan (Tom Hanks). Donovan doesn’t endear himself to the American public by successfully defending Abel from the death penalty, but he’s proved right when U-2 pilot Francis Gary Powers (Austin Stowell) is shot down over the USSR, and a prisoner exchange is set up for Abel and Powers, with Donovan negotiating the details in a wintery Berlin.

Bridge of Spies has an old-fashioned charm to it – you can totally imagine it popping up on a bank holiday afternoon. It’s what you might call “grown-up entertainment” in the sense that it tells a character-focused story. It’s made with an unfussy assurance that never allows its cinematic excellence to get flashy, and it patiently unfolds an intriguing character study that gives excellent opportunities to some gifted actors.

It’s also got a vein of wit running through it – you can see the fingerprints of the Coen brothers, brought in to do a polish of the script. They are there in the touches of the absurd as Donovan goes behind the Iron Curtain, mixing with an eccentric group of East Germans pretending to Abel’s family. Their also there in the moments of chill around the East German forces who suppress freedom and endanger lives. But it’s brought to life because Spielberg is such a wonderful, vibrant director.

Spielberg knows where to bring the flash and where to settle and let the camera watch the actors at work. Despite the calm of the general shooting, the film is packed with some wonderful sequences of bravura film-making, told so skilfully and with enough confidence that they don’t need to draw attention to themselves with overly flashy camera work or editing. But sequences such as the one that begins the film with Abel unknowingly being followed through New York, or Powers’ U-2 flight being shot down, or a horrified Donovan watching luckless Germans try to climb the Berlin Wall while he rides a train expelling him from East Germany, are made with a confident, unflashy flair.

It’s a film which has a real understanding of the paranoia and knee-jerk prejudice of the Cold War (on both sides of the curtain, but particularly in America), that mixes this with a note of hope in the essential decency of those on the ground – Roger Ebert described it as like a John Le Carre if it had been directed by Frank Capra – and that’s a good description. Spielberg’s film casts Donovan as the “little guy” who has to do the right thing and struggle to be accepted by his fellow Americans. Donovan’s travails in East Berlin have a Capra-ish quality to them, as his straight-shooting decency and integrity come up against the oblique games and half-truths of professional diplomats and spies. Abel as well is basically a solid, stand-up guy with a very clear moral compass and a dry wit that points out the quirks of both American and Soviet systems.

Tom Hanks is perfect casting as Donovan. He’s much overlooked as a great actor, and Donovan plays to his strengths, using all his integrity and trustworthiness to great effect. His Donovan is an honest broker, a man who believes above all in the cause of justice and has a good-natured confidence that allows him to never be flummoxed or even to show too much impatience with those putting obstacles in his way, even as he works overtime to get his way. It’s a perfect Hanks part played by perfection.

The film also boasts an excellent, Oscar-winning, performance by Mark Rylance as Rudolf Abel. Embracing the movies for the first time, Rylance could probably play Abel standing on his head, and this acting heavyweight turns in a performance full of sparkle and wit. Rylance is softly spoken, with a combination of world-weariness, wry humour and a dry unreadability. Abel however is also a fiercely loyal and decent man – and it’s the contrast and bond that develops between him and Donovan that powers the movie.

In fact you can’t help but miss him in the second half, interesting as Donovan’s patiently done and labyrinthine negotiations between the KGB, Stasi and CIA become. At times this second half becomes slightly drier than the rest – as if Spielberg can’t quite manage to keep the sense of intimidation and danger in place for the whole of these protracted scenes of bluff and double bluff. It’s also probably a fraction too long. It’s not a perfect movie after all – Donovan’s family are a series of bland identities (“Honey stop trying to end the Cold War and come to bed”) and the film’s final coda of Donovan getting the approval of the American people on contrasting train rides is a little too trite in its “ain’t freedom great” tone.

But I really like Bridge of Spies. It’s calm, it’s assured, it’s very well made, it’s very well acted. There is a lot of quality on show here – it practically drips off the show – and it’s made by a director who knows he doesn’t need to wrestle your attention with every shot to keep it. Spielberg is a director so talented that he can excel at making intelligent, grown-up movies that have something for everyone. For all that it’s slightly overlong and can’t quite keep its momentum up, I really like it.
Email ThisBlogThis!Share to TwitterShare to FacebookShare to Pinterest
Labels: 2015, Alan Alda, Amy Ryan, Austin Stowell, Cold War, Jesse Plemons, Mark Rylance, Scott Shepherd, Sebastian Koch, Spy thrillers, Steven Spielberg, Tom Hanks