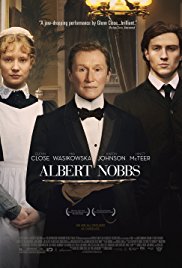 Passion projects are funny things. Everyone has them. And sometimes, when you put them together, other people struggle to see what all the fuss was about. Few films fit that bill more readily than Albert Nobbs. This cross-dressing, Victorian gender curio was something Glenn Close spent decades trying to bring to the screen, after starring in the original play off-Broadway.

Albert Nobbs (Glenn Close) works as a butler at a middling hotel in late 19th-century Dublin. Nobbs keeps himself to himself and saves his tips and wages with the dream of buying his own tobacco shop. Nobbs also has another reason to cling to privacy: Nobbs is actually a woman, masquerading as a man in order to find work. Everyone at the hotel is totally fooled – but his world slowly begins to shift when he meets decorator Hubert Page (Janet McTeer), who similarly is a woman living as man, but who has her own business and a wife and family home. Page’s experiences make Nobbs begin to question this life of isolation – with disastrous consequences.

Albert Nobbs is a carefully filmed, respectful, dry and dull film. It’s nominally a film you might expect to have something to say about gender and sexuality – but its shyness around such matters, its lack of insight, its bashful awkwardness means it already looks like a museum piece. On top of which, most of the characters and situations it covers are frankly not particularly inspiring, dynamic or engaging. There isn’t actually much there to spark your attention.

Which it makes it even more surprising that Close was so drawn to this material. Why? It’s hard to say, as even her performance seems as buttoned up, oblique and distanced as the character she is playing (it doesn’t help that Nobbs is neither an interesting or engaging character, coming across like a person with an ill-formed personality, whom the viewer struggles to understand). You would expect her to have some sort of deep emotional bond with this character – but I’m not sure that really comes across.

The film fundamentally lacks the courage it needs to tackle issues of gender complexity. Nobbs has a troubled background of abuse and rape – but the story never really tackles this, instead using it as a lazy attempt to explain a confused sexuality. The film never really engages with the issue of whether Nobbs likes being a man or feels forced to do to make ends meet. It throws in a curveball scene where Nobbs relaxes on a beach walk wearing women’s clothes. But it never takes any step – even the most tentative ones – of Nobbs laying claim to relating more to being one gender or another.

Nobbs doesn’t seem to identify as a trans man, a cis-gender woman disguising herself as a man for practical reasons in a patriarchal world, or as someone trying to live outside traditional gender constructs all together. It feels pretty uncomfortable with virtually any formulation along these lines, so avoids exploring any of them. It wants Nobbs to feel comfortable in women’s clothes, but also wants to admire Nobbs for living as a man, while also suggesting Nobbs is trapped by society. It’s a confused film.

In any case, the more time you spend with Nobbs the creepier Nobbs seems. It’s unfortunate that a large chunk of the film is given over to Nobbs’ confusingly motivated courtship of Mia Wasikowska’s maid. Throughout, Nobbs is strangely incapable of understanding any sort of emotional link between two people, and here seems unable to comprehend that Helen may have her own emotions and desires that don’t marry with Nobbs’ functional desire for a wife. This pursuit (seemingly to complete the picture of a desired future) creates an image of a stalker rather than someone really seeking a romantic connection. The fact that Helen and her rakish beau plan to swindle Nobbs hardly helps to make these characters likeable either.

Close’s performance doesn’t help with its locked in reverence. So it’s just as well that Janet McTeer bursts into the film with energy, (literally) baring all in seconds and bringing more vibrancy, dynamism and engagement in her scenes than the rest of the film put together. While Nobbs is a rather dull, empty vessel of a person, Page is a lesbian in a loving relationship, escaping marriage by pretending to be a man. That is a story I can get interested in, that can have relevance today: Nobbs’ isn’t. McTeer is excellent, and I wish the film her been about her.

Albert Nobbs is a worthy, but flat film shot with a slow reverence and delivering a story that promises much but completely fails to deliver. Aside from Janet McTeer’s wonderful performance there is very little reason to visit this film. In fact today its avoidance of even engaging with questions of gender and identity actually make it look rather gutless and pointless. A passion project that really makes no real sense.
Email ThisBlogThis!Share to TwitterShare to FacebookShare to Pinterest
Labels: 2011, Aaron Taylor-Johnson, Brenda Fricker, Brendan Gleeson, Glenn Close, Irish films, Janet McTeer, Jonathan Rhys Meyers, Maria Doyle Kennedy, Mark Williams, Mia Wasikowska, Pauline Collins, Rodrigo Garcia