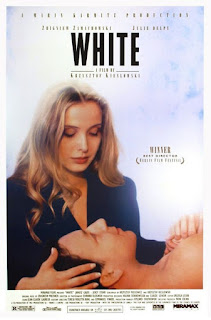 The second film in Kieślowski’s ambitious thematic trilogy probably couldn’t be much more different from the first. Whereas Blue was a romantic tragedy, this is a sort of bitter comedy, a kind of anti-farce if you like. Here, the themes of equality are much more about getting even rather than all men being equal. Just as Blue looked at the negativities of liberty, this looks at the dark side of equality, and the blinkered tunnel vision we follow in order to get ourselves even.

Polish hairdresser Karol Karol (Zbigniew Zamachowski) is divorced in Paris by his French wife Dominique (Julie Delpy). In quick succession, Dominique strips him of his home, access to their bank account, his passport and his share of the business, and takes another lover. Reduced to homeless penury on the streets of Paris, Karol finally finds a way to get home to Warsaw by befriending sad-sack successful businessman Mikolaj (Janusz Gajos), a fellow Pole, on the Métro. With Mikolaj’s help, Karol finds himself back home and soon in a position to start scheming his revenge.

White is, let’s be honest, a lot less of a triumph than Blue. That was a film that combined stunning visuals, directorial invention, profound depth and emotion. It was a story that looked at universal themes from a fascinating series of new angles. White, however, is more of a shaggy dog story. It feels like it’s aiming for some sort of Chaucerian fable, but it never really goes anywhere in particular, and it never really engages as much as it should while it tries to get there. While it’s not unentertaining film, it’s at best a good one rather than a great one.

My main problem is that Dominique’s character just never clicks. Why does she do the things she does? No idea. We are never given any insight into her character – she remains a cipher, bordering on a trope of the wicked beautiful seducer. Why does she jilt Karol? Surely it can’t be because of his (rather obvious) impotence ever since he arrived in France, and felt isolated in his new home? Why does she take such a delight in persecuting him, even down to audibly having sex with her lover when he calls her (“Perfect timing” she says before getting frisky)?

It’s hard not to get the sense of a film which has a slight suspicion of women. I don’t imagine that this a suspicion Kieślowski  in any way shares – sensitive and humane portrayals of women are central to his films (not least Blue) – but when the only female character in this is the distant and unknowable Dominique it’s not good. Without any sense of why she has done the things she does, it’s hard to feel comfortable with the semi-comic destruction of her Karol plans. 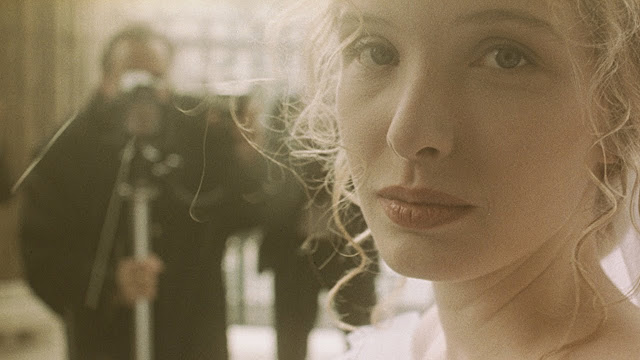 But then that is part of the film’s point: Karol is obsessed (without even really knowing it) with his wife. Not even so much with revenge for that matter – just getting the chance to take on his wife in a one-sided struggle makes him feel closer to her. The only possession he takes home from Paris is a bust that reminds him of his wife (and which he painstakingly repairs after it is smashed to pieces). Much as tries to build a new life, it’s a monofocus – he only gets what he gets in order to use the resources against his ex-wife.

So equality is in Kieślowski’s design, not a good thing. Shy, sweet Karol basically ends up entrapping himself and his wife in equally frustrating positions: she in prison, he faking his own death without a penny. What was the point for Karol? No wonder he looks up at her in prison with tears rolling down his face – he’s still in love and he’s got nothing to really show for his equality, other than their joint misery.

All of this sits alongside Kieślowski’s brilliant understanding of post-Cold-war Poland, a bustling land of opportunity to make a quick buck, where simple peasant farmers can be bamboozled out of their land by smarter guys who know businesses from the West are just dying to buy up properties. Karol shares this understanding of Poland. No wonder he’s all at sea in the rest. The instant he arrives back he’s delighted, relaxed and more confident – “I’m home!” he cries joyfully, even when his first view on arriving in Poland is a mass rubbish dump.

Moments like that show Kieślowski’s dry comedy. There are plenty of other moments, helped by Zamachowski’s pretty lovable performance of the naïve-but-growing-in-confidence Karol. Karol and Mikolaj (an excellent Janusz Gajos) put together quite an excellent double bill of bromance laced with darker themes of depression (it’s no real surprise who Mikolaj is talking about when he tells Karol that he will help him if Karol can help his “friend” who wants to die but can’t kill himself). Karol’s hapless fate in Paris raises a few smiles, as does his surreal escape stuffed in a suitcase.

But there aren’t quite enough of them. Too much of the film either doesn’t connect or hold together. I could have certainly done without Karol’s sexual prowess returning once he is confident and rich in Poland (yawn!). Dominique’s non-character remains a serious problem, and there just isn’t enough meat on the bones here. Compared to the richness of the first entry in the series, this feels remarkably empty. It’s also a lot less visually arresting and imaginatively done than the first film: I’m already struggling to remember any of the visuals.

Kieślowski may well have wanted a sort of anti-comedy to be the pivot of his trilogy, but it doesn’t really work here. He ends up with something that feels so slight and underdeveloped that it doesn’t stick with the viewer, and doesn’t engage them either. While it has moments, as you would expect from a great director, and some very good actors, it doesn’t have nearly enough of them.
Email ThisBlogThis!Share to TwitterShare to FacebookShare to Pinterest
Labels: 1994, Comedy, French cinema, Janusz Gajos, Jerzy Stuhr, Julie Delpy, Krzysztof Kieślowski, Polish films, Three Colours trilogy, Zbigniew Zamachowski