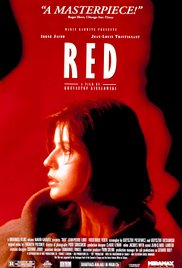 Spoiler warnings: I wouldn’t usually do this for a film that was made over 20 years ago, but discussing this film is almost impossible without covering the entire plot so – be warned! This is a rich viewing experience you should discover for yourself.

Kieślowski’s great trilogy wraps up with Three Colours: Red, a fascinating, moving, intriguing puzzle of a film that opens itself up to countless interpretations. It’s a film that seems to be about a great many things, but wears its intelligence and insight very lightly, never hammering points home or getting too wrapped up in its own smartness. It’s primarily a story and never forgets that. It also pulls together threads and themes from the entire trilogy hugely effectively. It’s a great movie.

Valentine (Irène Jacob) is a student in Geneva, funding her time at university through part-time modelling. After accidentally hitting (but not killing!) a dog with her car, she meets the dog’s owner, retired judge Joseph Kern (Jean-Louis Trintignant). Joseph is spending his time in isolation from the world, listening to his neighbours’ phone calls, more out of a judge’s habit of finding out secrets than any truly malicious intent. Valentine challenges this blatant disregard of privacy, and she and Joseph begin to form an increasingly strong bond.

Red is a beautiful film, wonderfully made and rewards constant analysis. Kieślowski described this as the hardest film of the trilogy to write, and you can see why. Dealing with themes of fraternity, it ties this in closely with love (romantic and otherwise). The entire film shows the strengths of people coming together, specifically Valentine and Joseph who develop a bond that enriches their lives. This is contrasted throughout with Valentine’s domineering boyfriend on the other end of the phone-line, and modern communication in general that builds distance between people. Joseph, a man distanced himself from all others, finds his humanity once he opens himself to considering other people as people.

Kieślowski’s film also plays interesting games with narrative and time. A seemingly minor character, Auguste, a lawyer training to become a judge, is slowly shown to share a huge number of life events with Joseph’s youth. The question that bubbles over the film is, is this a coincidence or are Auguste and Joseph somehow linked? Is Auguste in some way the same person as Joseph – some sort of reincarnation? Is this fate or chance or mere coincidence? Is Joseph, living like some lonely old-testament God in complete isolation, somehow trying to move events to correct errors in the past – to try and find some contentment for Auguste (whose conversations with his girlfriend he has been listening to) so that he avoids the life Joseph has led? 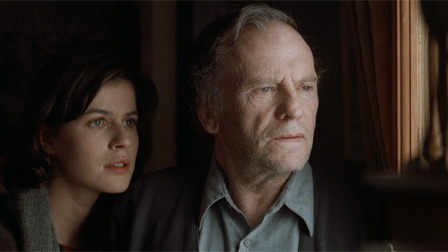 I like this idea. It appeals a lot to me, not least as I started to feel that Joseph was almost some sort of Prospero, using phone taps as his own private Ariel to know everything happening around him and then (more benignly perhaps than Prospero) using this to improve the lives of those close to him. Perhaps. There is even a seemingly magic storm at the end of the film that brings several characters together, not least the leading couples from the previous two films in the trilogy. It’s also a storm that, it is suggested, will bring Valentine and Auguste together.

It’s a romantic flourish at the end of the film that speaks of the possibilities for the future (though typically of this intriguing series, it’s a flourish that comes out of a ferry accident that kills over a thousand people – you can’t get something for nothing in this world, and no romantic story is straight forward). It’s also a natural development of the strong romantic link between Joseph and Valentine. If Joseph and Auguste are (essentially) versions of the same person, it’s a further suggestion that (in another life) Joseph and Valentine would certainly have fallen in love (to match the platonic love that develops between them). This interpretation of love joining people together is seen as well in the lead couples from Blue and White also surviving the accident.

Or is this all coincidence? Kieślowski plays the mystery and depth so lightly – lets these points float out or be lightly stated without tub-thumbing – that it leaves it all gently to the viewer’s imagination. You can make of it what you will: the story works just as effectively if you ignore all the things I just discussed. Joseph as the isolated, austere man who finds a warmth in himself awakened by the generosity and compassion of Valentine. All this stuff could just be the working of chance.

But either way, the film is about fraternity: people coming together, and communication and compassion making us human. Irène Jacob is wonderful as the endearing, romantic and empathetic Valentine, her brightness and humanity shining through. Jean-Louis Trintignant is superb as the judge, whose careful veneer of distance and coldness is punctured throughout the film. The scenes these two share are beautifully done: conversations that throb with emotion under the surface. Kieślowski again directs these scenes with a masterful minimalism, using differing heights and levels (they are very rarely on the same level, usually one sits or stands above the other) to show the dynamics subtly change between the two. These height differentials – with Valentine often kneeling at Joseph’s feet – also suggest a growing intimacy between the two characters. 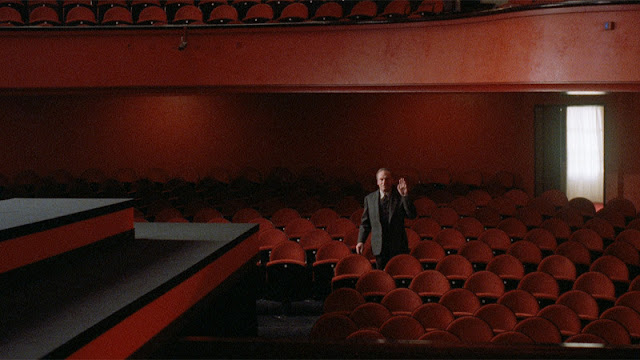 Technically the film is a marvel. It is lusciously filmed by Piotr Sobociński. The presence of red throughout is very well done and adds a poetic brilliance to the images. Kieślowski in particular shoots sunrises and sunsets with an astounding beauty, and uses light to add a huge emotional depth and beauty to private conversations. Zbigniew Preisner’s score is marvellous, a lyrical, beautiful series of compositions that rewards constant re-listening.

Red is a marvellous, thought-provoking and humane film crammed with wonderful and involving ideas, and brilliantly gives you loads to think about both narratively and thematically. It’s a warm and moving story, with darker elements that make those parts seem richer. With two marvellous performances at its centre, it’s brilliantly directed by Kieślowski (who tragically died shortly after the film’s release), with grace, poetry and passion. It looks wonderful, it sounds marvellous and it always make you think. It’s a masterpiece.
Email ThisBlogThis!Share to TwitterShare to FacebookShare to Pinterest
Labels: 1994, Frederique Feder, French cinema, Irène Jacob, Jean-Louis Trintignant, Jean-Pierre Lorit, Krzysztof Kieślowski, Three Colours trilogy