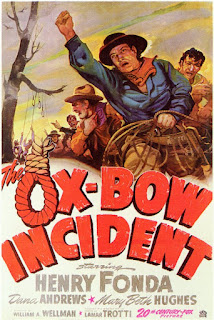 Spoilers: Can’t quite believe I am saying this about a film that is over 60 years old – but I’m going to give away the whole plot here. Because you can’t really talk about the film without it. It’s a film that’s well worth watching not knowing what is going to happen, so you are warned!

We all like to believe that, when push comes to shove, we live in a civilised world. That when the chips are down, we would behave nobly and stand for what was right. The Ox Bow Incident is a challenging western, because it defiantly says the opposite. The world is a cruel and judgemental place – and sometimes good people are ineffective, regular people panic and lash out and decent people pay the price.

Gil Carter (Henry Fonda) and Art Croft (Harry Morgan) ride into town. Cattle rustlers are plaguing the town and a popular rancher has been gunned down outside his home. With the sheriff absent and the judge ineffective, the townspeople take justice into their own hands. Led by a faux-Civil War major Tetley (Frank Conroy) and aggrieved friend of the dead rancher Jeff Farnley (Marc Lawrence), they form a posse and ride out to lynch the three suspects (Dana Andrews, Anthony Quinn and Francis Ford). Carter and Croft follow, reluctant, but worried that if they protest too much suspicion will fall on them.

The Ox Bow Incident is a film you keep expecting to make a veering turn towards positivity – you keep expecting it to suddenly draw breath and for everything to turn out okay. Instead, it’s a grim insight into how mob mentality can drive people into sudden and cruel actions. It’s equally a testimony to how ineffective protest and principles can be in the face of anger and revenge. It’s a Western that feels years ahead of its time – there is no romanticism here, just grim everyday life.

In many ways it’s a po-faced and serious morality tale, and revolves around one long scene where the lynch victims are tried by mob justice, plead for their lives, are given a brief respite to say their prayers, protests from a few men are swept aside, and then they are strung up. Every time the viewer starts to think righteousness will slow things down, the certainty of the mob stops decency from taking hold. It’s a slippery slope towards the deaths of men we find out almost immediately afterwards were completely innocent.

The Ox Bow Incident is a film that preaches – and it feels very stagy, a feeling increased by the obviousness of its sets and the intense chamber feeling of the limited locations and scenes. But it works, because it’s so brilliantly put together and so grippingly involving. Wellman’s film is trimmed to the bone, the writing is very strong with Lamar Trotti’s script bristling with moral outrage at humanity’s weakness and fear. It’s a story of injustice and mob rage – and it works because it manages to tell a compelling story while also dealing with universal themes.

Henry Fonda listed this as one of his few early performances he felt was good. Fonda is often remembered as the archetype of American justice, so it’s fascinating here to see how ineffective and compromised Carter is. Carter knows what they are doing is wrong – but he lacks the decisiveness, strength of will or character to persuade people. In fact, his main contributions are quiet comments, or sniping from the wings of the action.

It’s an inversion almost of Twelve Angry Men’s juror #7 – Carter can’t lead us to justice, because he’s a bit too afraid, a bit too weak, a bit too compromised. At the end, as he reads Martin’s final heartfelt and forgiving letter (beautifully filmed by Wellman with Croft’s hat obscuring Carter’s eyes while he reads, a shot that has multiple symbolic meanings), he projects not moral force but the shame and guilt of a man who, when it came down to it, didn’t have the determination to do what was right. It’s a perfect comment on what a writer may have felt was happening all over in 1943.

The real advocate of justice is Harry Davenport’s humane shop-keeper – but he can’t persuade anyone (Davenport is excellent). Instead, all the big personalities are leading the lynch mob, from Frank Conroy’s bullying Major, who just wants to see the action and stamp his domination on others, to Jan Darwell’s vile honking old woman excited by the killing, to Marc Lawrence’s just plain angry Farnley. Everyone who knows what they are doing is wrong – like Tetley’s weak-willed son (well played by William Eythe) – are just too weak, scared or uncharismatic to do much more than vainly protest. Their regular joe victims (all three actors are excellent as in turn, decent, old and confused and suspiciously alien) don’t stand a chance.

The Ox Bow Incident is a perfect little morality tale, crammed with brilliant performances and moments. It even has the guts (for the time) to reference that most lynchings didn’t have white victims, and introduces a sympathetic black honorary padre who is equally powerless. It’s a film that really feels like it came from an era when the world was going to hell in a handbasket, but it speaks to all ages. Because our fear and readiness to attack – and punish – those people we see as different hasn’t gone away. It’s chilling to think that the world hasn’t changed and this story could just as easily be transposed – with no changes – to half a dozen locations around our world today.
Email ThisBlogThis!Share to TwitterShare to FacebookShare to Pinterest
Labels: 1943, Anthony Quinn, Dana Andrews, Francis Ford, Frank Conroy, Harry Davenport, Harry Morgan, Henry Fonda, Jane Darwell, Social issues, Westerns, William A Wellman