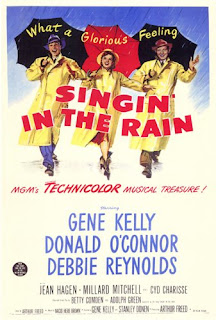 Is there a more loved musical than Singin’ in the Rain? Is there a more famous musical from Hollywood’s golden age? That second point is particularly interesting, as this was possibly the last of the big Hollywood song-and-dance films – most of the rest that followed were film versions of Broadway hits. Singin’ in the Rain also has that “late discovery” quality: inexplicably not nominated for Best Picture (or hardly any other Oscars), it was for many years considered a second tier musical behind works like An American in Paris. Now it stands tall over the lot of them.

Singin’ is a film assembled from a collection of songs MGM held the rights to. The songs were given to Kelly, Donen and the screenwriters with the instruction to “come up with a movie”. What they came up with was this delightful film-about-films. Don Lockwood (Gene Kelly) and Lina Lamont (Jean Hagen) are the biggest stars of the silent screen in Hollywood, whose careers are in trouble overnight when sound is introduced. He can’t really act and she has a voice like nails on a blackboard. But Lockwood can sing and dance – so why not make their latest film a musical? Especially since the talented Kathy Selden (Debbie Reynolds), who Lockwood has fallen in love with, can sing and act and can dub Lina’s voice. What could go wrong?

There are few more purely enjoyable films than SIngin’ in the Rain. Nearly every scene has a moment designed to make you burst out in a smile, be it a cracking line of dialogue, a piece of prodigious dancing skill or the simple warmth and joy of the leading actors. Every second something delightful seems to happen. The entire film is an explosion of gleeful joy in the sheer exuberance of singing and dancing. Kelly’s choreography brilliantly uses everyday props and pieces of furniture to give the numbers an exciting everyday charm. It gives the songs an immediate “gotta dance” energy. How could you not like it?

Threading these songs around a structure of Hollywood taking on sound for the first time was a brilliant idea. The recreation of the acting styles and technology of Hollywood is brilliant. Lockwood is a hopelessly stagy actor, hideously artificial in his gestures, while poor old Lina Lamont is horrendously wooden with an awful voice, and a complete lack of any talent. Jean Hagen as Lina Lamont is in many ways the butt – but she’s so demanding, bullying and selfish we don’t mind that most of the jokes are on her. 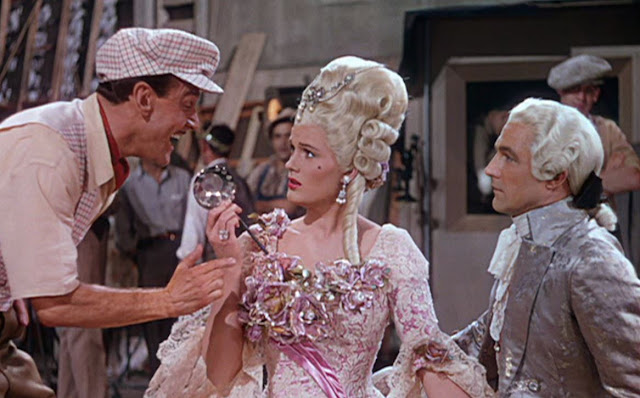 The shift towards sound in Hollywood is actually interesting as well as hilarious. Where do we place the mikes? How should the actors get used to speaking into a mike? How do we cancel out the background sound? What do we do with loud props? One of the highlights is the screening of this film-within-a-film to an audience for the first time. All the terribleness Lockwood and Lamont gets revealed. In a particularly genius moment, the sound of the picture gets out sync with the picture, with the voices seeming to come out of the young actors’ mouths to hilarious effect.

Alongside this we get some of the finest song-and-dance routines in the history of the movies. Donald O’Connor is electric as Cosmo and his dance routine for “Make ‘em Laugh” is an astounding early pace-setter in the film: how does he do what he does here? O’Connor goes bouncing off walls, swirling in circles on the floor, springing from place to place without a single pause for breath. Most of this number (like many of the others) is done in one take with electric pace. And that’s the film just warming up.

Debbie Reynolds famously described doing Singin’ as being (along with childbirth) one of the hardest things she’d ever done in her life. You can see that in Good Morning, another electric three-way number with herself, Kelly and O’Connor – she is pounding the floor to keep up with these two masters (and does a brilliant job). She was pushed to the extremes by Kelly who considered her not strong enough of a dancer. Kelly even dropped her from Broadway Ballet Medley, a complex ballet-heavy sequence that I must confess I find a little dull. She’s still excellent – charming, sprightly, light, glorious fun – but it did mean Kelly re-worked the main number to showcase just himself. 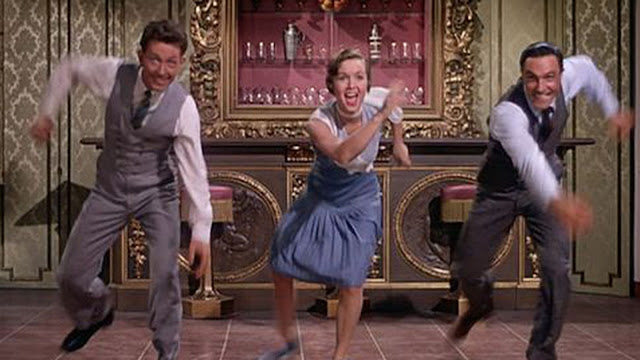 Ah yes. Singin’ in the Rain. This sequence of the film is probably wedged in everyone’s mind. Even if they’ve never seen the film, people are familiar with Gene Kelly, soaked to the skin, dancing through puddles and swinging around lampposts. Kelly is of course marvellous in this sequence (hard to believe he was apparently suffering from the flu at the time) and the number has complete charm to it – that carefree vibrancy of realising you are falling in love. Especially as Lockwood’s ego is finally being put to one side in order to celebrate feelings he’s having for another person. But the whole scene is just sheer cinematic magic. And for something so famous, you never get tired of it.

But then Kelly has pure star-quality here. Lockwood is a charming, handsome and smooth film star – but the film is happy to puncture his pomposity, or demonstrate in its opening sequence the self-aggrandising version of his early career (“Always dignity!”) with the reality of faintly embarrassing and dignity-free stage and stuntman work. Kelly is so charming you don’t mind that the film gives him an easy ride, considering Lockwood is actually quite selfish.

Singin’ in the Rain is pretty close to perfect. Even though I find some of the ballet stuff a little boring myself, it’s still filmed and shot with skill. It’s a pet discussion between film experts to ask how much of the film was directed by Kelly and how much of it was done by Donen. I guess it doesn’t really matter except to cinephiles, as the film is just beautifully directed: light, frothy, fun and with real technical expertise – the slow crane shot at the end of the famous number is justly famous. The pace is spot on, and the film is hilarious. Its understanding of filmmaking really pays off in the sequences that chronicle early film making.

So why did this film not get recognised at the time? Well to be honest, there were probably too many movies like this out at the time. It was a lot easier to miss in the crush of mega-MGM movies. It followed on the coat-tails of An American in Paris which had worn a huge number of Oscars (and was pushed back into cinemas in place of Singin’ in the Rain). Singin’ was still a big hit – but it perhaps needed film-fans to embrace it because it so perfectly married a love of Hollywood with the technicolour delight of 1950s musicals. Either way, Singin’ in the Rain is a delightful masterpiece which is guaranteed to pop a smile on your face. No matter the weather.
Email ThisBlogThis!Share to TwitterShare to FacebookShare to Pinterest
Labels: 1952, Debbie Reynolds, Donald O'Connor, Films about film, Gene Kelly, Hollywood satire, Jean Hagen, Millard Mitchell, Musicals, Rita Moreno, Stanley Donen