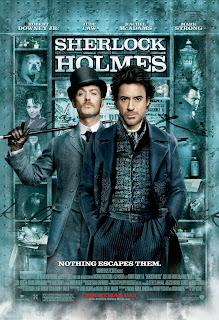 I don’t think there has been a single character brought to the screen more often than Sherlock Holmes. Sure there are certain tent-pole performances (Rathbone, Brett, Cumberbatch) that people automatically think of when you say “Sherlock Holmes”, but there are hundreds of others. It’s a character that survives constant re-imagination. In fact, you could argue it’s pretty much vital to bring something of your own to the table when putting together a Sherlock Holmes dramatisation. It’s what made Sherlock so successful. And it’s something that works very well here.

Sherlock Holmes (Robert Downey Jnr) is part Bohemian artist, part mad scientist, part kickboxer. The sort of guy who can think so far ahead he can plan out an entire fight in his mind before it even begins. He’s partnered up with determined, smart, handy-with-a-sword Dr Watson (Jude Law). With Watson preparing to move out of 221B to marry Mary Morstan (Kelly Reilly), they take on their last case: defeating creepy Dracula-lite Lord Blackwood (Mark Strong), who claims to have returned from the dead and wants to take over the British Empire. Along the way they are helped (or hindered) by the mysterious Irene Adler (Rachel McAdams) an old flame of Holmes’.

Guy Ritchie’s rollicking adventure is actually a huge amount of fun that, underneath the crashes and bangs, actually has a really strong respect for the original stories (the film is littered with references and quotes from the originals, none of which feel shoe-horned in except maybe Rachel McAdams’ Irene Adler, perhaps because the producers felt Holmes needed a love interest to stop any worries that he might be a bit too much in love with Watson). Ritchie has crafted a Holmes-Watson relationship that repositions them as a sort of odd-couple surrogate brothers, a marriage of equals (and make no mistake, a marriage is basically what this Holmes and Watson have). It’s big and silly, but then so were the original stories (The Creeping Man anyone?).

Ritchie is a film-maker it’s easy to find faintly annoying, with his faux-geezer attitudes, his bizarre philosophical views and his love of the poor-taste gag. But on this film he’s basically a director-for-hire rather than putting his own story together and, you know what, putting this director into a studio strait-jacket is actually pretty good. It smacks some disciple on him, makes him drop his indulgent and poor-taste jokes and instead brings his strengths as a director – his sense of pace, his eye for a witty image, his rollicking sense of fun – to the fore. That’s probably why this is his most enjoyable and best film.

It’s a film that mainly works because Downey Jnr and Law make a terrific pairing as Holmes and Watson. They have great chemistry, they spark off each other extremely well as performers and they really give the sense of two life-long devoted friends. Both actors are very good here. The film hits these notes of male friendship extremely well – a mixture of mocking and abuse, mixed with devotion and loyalty. The film gets the balance of these things exactly right: from debates to fights, you really get a sense that these two are honorary brothers, almost a bickering old married couple.

In fact, the whole film revolves quietly around this relationship coming under threat (as Holmes sees it) of Watson leaving Holmes to get married – although, nicely, the film makes clear his fears of Mary are completely unfounded. Part of the dual engine of the film is Holmes continuing to tempt Watson into getting more and more involved with his cases, because he doesn’t want to lose his friend. It’s actually quite sweet. As are the protective feelings both have for the other: Watson knows Holmes puts himself at ridiculous risks, in turn Holmes shows a gentle worry for Watson’s gambling addiction (a popular Sherlockian society interpolation from references in the story).

All this warm, brotherly stuff from two excellent performers is built into a dramatic, thrillingly shot, series of action and detection scenes. The film’s big gimmick is Holmes’ ability to use his analytical abilities to accurately predict the outcome of fights (which the film communicates with slow motion and forensic narration by Downey Jnr, before staging the entire fight again at real time). It’s actually a fairly neat way of turning his deductive abilities into a visual language. Alongside this, plenty of this great fun – exciting or, as in Holmes’ battle with a 7ft giant, funny. All hugely entertaining.

Placing the focus on this relationship and the action does mean that the mystery elements of the plot get a bit short-changed. The story is a rather silly series of near-Dracula style high-Gothic mysteries that may or may not be real (all these occult references more than echo The Young Sherlock Holmes!). There isn’t much in the way of the small intricate puzzles of the early stories here – but then plenty of the later ones became increasingly hyper-real Gothic stories, so I guess that is fine. Mark Strong does a decent job as the villainous Blackwood, using his sinister looks and imperious voice extremely well.

It also looks wonderful – the photography and set design is marvellous – and the score by Hans Zimmer must be one of his best ever, a sprightly mix of Irish music, Westerns and Music Hall. Ritchie directs it with a wonderfully, tongue-in-cheek, entertaining sprightliness, like Sherlock Holmes meets Indiana Jones. Holmes more than survives his re-imagination as an action superhero – and in fact he brings across a lot of the tone and character of the original book along with him. A terrific entertainment and a more than worthy entry to the Holmes movie cannon.
Email ThisBlogThis!Share to TwitterShare to FacebookShare to Pinterest
Labels: 2009, Eddie Marsan, Geraldine James, Guy Richie, Hans Matherson, James Fox, Jude Law, Kelly Reilly, Mark Strong, Rachel McAdams, Robert Downey Jnr, Sherlock Holmes