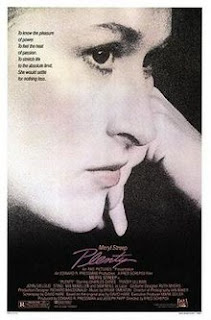 David Hare’s 1970s play Plenty looked at the impact of peace on the war generation. A “state of the nation” story on the growth of prosperity in the post-war era, and the return of many to the humdrum reality of life with Britain’s importance as a world power in rapid decline, led to isolation, anger and depression. It’s a shame that much of that really doesn’t come across in this buttoned-up, murky and unclear social drama, with a hard-to-follow plot and a hard-to-like central character.

Susan Traherne (Meryl Streep) is an SOE courier in France during the Second World War, who has a one-night stand with fellow SOE operative Lazar (Sam Neill) which has a profound effect on her. After the war, she marries Foreign Office civil servant Raymond Brock (Charles Dance), but is unable to find a purpose and contentment in regular civilian life. As the years tick by, and their surroundings grow ever more plentiful, Susan becomes more and more unhappy, difficult and demanding.

The central issue with Plenty (I can’t comment on the play, having never seen it) is that Meryl Streep creates possibly one of the least likeable leading performance you are going to see. Perhaps mistaking Britishness for cut-glass chill – or perhaps it’s the character – Streep’s Susan is brittle, bitter, angry, annoying and infuriating. She complains about everything around her, she lashes out at people, she sulks and whines with no self-insight, she constantly makes life difficult for those around her (most of whom are unbelievably patient) and she is almost impossible to work out.

While the film perhaps intends her to be as sort-of PTSD sufferer, with undiagnosed personality disorders, who cannot reconcile the shallowness of her life with the excitement of war service, I’m not sure this comes across. All we really see is her deeply irritating self. We don’t get a sense of her war service – we see her breakdown early in the film in France – and her relationship with Lazar remains so ill-defined we are unclear what impact it had on her, other than part of a halcyon memory. The film’s final scene is a flashback to the end of the war: Susan watching a sunrise on a French hill dreaming of her life being full of days like this. That scene would have been helpful earlier – it’s the only time we see her optimistic or likeable in the film, and it gets lost by placing it at the end. With it in order we could have warmed to her more.

Instead she remains a shrill presence, in a hard to relate to film that never really makes clear whether we are meant to empathise with Susan, or find her as frustrating as some of the characters do. The film also fails to make this enigma part of its viewing design – I don’t feel like having the lines blurred made the film a richer experience, just one it was harder to engage in. Schepisi’s directing style is very cold and distant – from the slow camera moves, to the tight close ups on Susan at key moments, to the deliberate lack of clear time line (each scene moves on weeks, months or years from the previous one with only a few design and dialogue hints to suggest the change).

Combined with Hare’s indefinable script – crammed with elliptical conversations, unclear emotional and dramatic points, and political points delivered with a querying shrug – it makes for a film that is very hard work to engage with – and doesn’t offer much to reward the viewer if they do.

What pleasures there are come from the performers. Charles Dance is good as Susan’s long-suffering husband – far from a domineering patriarch, his only real crime seems to be that he is a bit boring. Ian McKellen makes a great cameo as a senior civil servant, coolly and calmly telling Susan the errors of her thinking. Sting is an odd choice (I suspect his presence helped the film get backing) and Tracey Ullman does tend to go too far as Susan’s bohemian but more emotionally restrained friend.

John Gielgud steals the show. He is simply superb as Brock’s boss, an old-school diplomat who is, at first, a figure of fun with his Edwardian values but whom events (in particular Suez) reveal to have firm principles. Gielgud also gets most of the film’s best lines, while his quiet air of polite dignity is both endearing and admirableHis delivery of the following line to a tedious bore of a party guest basically is the high point of the movie: “But perhaps before I go, I may nevertheless set you right on a point of fact. Ingmar Bergman is not a bloody Norwegian, he is a bloody Swede.”

But there aren’t enough pleasures like this in this overbearing, rather trying film that never really decides what point it’s trying to make. I think it’s something about wealth and discontent and the more selfish and scrambling build of the post-war generation towards Thatcherism. But I’m really not sure. And to be honest I’m not sure I care.
Email ThisBlogThis!Share to TwitterShare to FacebookShare to Pinterest
Labels: 1985, British Films, Charles Dance, David Hare, Fred Schepisi, Ian McKellen, John Gielgud, Meryl Streep, Play adaptation, Sam Neill, Social issues, Sting, Tracey Ullman, World War Two