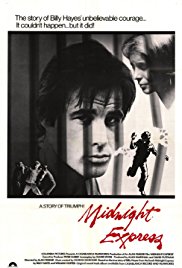 Ever wondered why “Turkish prison” was, for a long time, practically a synonym for “hell on earth”? A big reason is this film’s box-office success, a heavily fictionalised version of the experiences of Billy Hayes (Brad Davis), a young American caught smuggling hashish out of Turkey and eventually sentenced to 30 years in a prison notorious for violence, torture and rape. The film covers Hayes’ imprisonment, his alliances with fellow prisoners loud-mouthed American Jimmy (Randy Quaid) and sensitive, strung-out Englishman Max (John Hurt), and his ill-treatment at the hands of sadistic guard Hamidou (Paul L Smith). It’s not exactly a light watch.

There is barely a Turk in this who isn’t crooked, sadistic, greedy, ugly or stupid (or a combination of all five). The depiction is so unsettlingly bad, the real Billy Hayes apologised at the time (he was joined years later by the film’s producers and writer, Oliver Stone). Many of the Turks are lascivious anal rapists, while the whole film has a queasy unease about homosexuality. The real Billy Hayes engaged in relationships with other men in prison – the film’s Hayes kisses a fellow prisoner in the shower but then shakes his head and leaves. A 1970s audience could cope with seeing a man flogged or tortured – but in no way could they be expected to watch two men making out.

Other than these unsettling black marks, Midnight Express is a taut, well-made, melodrama. And I say melodrama because both Stone and Parker frequently go over the top. After a friend is betrayed to a horrible fate by a Turkish prisoner, Hayes freaks out, violently beats the Turk, gouges his eyes and then (in almost laughable slow-mo) bites his tongue out and spits it across the room. Later, he is finally allowed to receive a visit from his girlfriend – she presses her breasts up against the glass while a near catatonic Hayes tearfully masturbates (“I wish I could make it better for you baby” she sighs, tearfully). Yes both those sequences are as OTT as they sound.

But when it calms down, Parker crafts a pretty affecting story. It cuts Hayes a lot of slack – I found it hard to feel sorry for a dumb, drug-smuggler who assumes his American passport will let him off with a slap on the wrist. I can’t be alone in thinking that someone who breaks the law deserves to pay some sort of price. To be fair, I think the film partly shares this view: it fast-forwards through most of Hayes’ original term, and only really hits into full misery once his sentence is arbitrarily extended by 27 years. I think Parker and Stone believe this switches the moral right to Hayes, who had served his term only to be hit with a sudden draconian change weeks before release.

A lot of the film’s impact comes from Brad Davis’ impassioned performance as Hayes. There is something very sensitive and gentle about Davis, a real vulnerability that the film seizes upon to great effect. He looks like a bewildered lost soul, and Davis’ performance is scintillating first in its confusion, then his distress and anger.

There are decent performances from the rest of the cast, with John Hurt standing out as the gentle Max. Garlanded with awards, Hurt is perfect as the straggled, beaten down, but still cynical and surly Max – and of course Hurt’s natural affinity for suffering works perfectly for a character who goes through the wringer. Quaid also does decent work as a thoughtless loudmouth, as does Kellin as Hayes’ impotent father. It’s also nice to see a small cameo from Peter Jeffrey as a well-spoken half-English paedophile in the prison’s psychiatric ward.

It’s a shame that Midnight Express too frequently goes too far, as it’s got an almost medieval understanding of suffering. The prison is a grim world of its own, where the prisoners largely self-police and acts of petty revenge are common. Later in the film, Hayes is sent to the film’s psychiatric ward, a hellish basement where prisoners walk in drugged-up dumbness pointlessly round and round a stone pillar.

Midnight Express is a decent film, but not a pleasant one – and it leaves a slightly sour taste in the mouth, for all the competence with which it is made. Parker and Stone frequently go too far, and the reek of homophobic racism still comes off the film. However it is certainly a good piece of technical film-making and has some marvellous performances in the mix.
Email ThisBlogThis!Share to TwitterShare to FacebookShare to Pinterest
Labels: 1978, Alan Parker, Bo Hopkins, Brad Davis, Irene Miracle, John Hurt, Paul L Smith, Prison drama, Randy Quaid