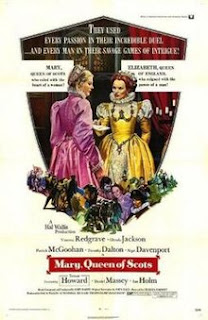 So here we are, back in the Tudor history craze of late 1960s Hollywood. Charles Jarrott directed, following up his efforts in Anne of the Thousand Days with this professionally mounted, handsome and rather personality-free film adaptation. It occasionally falls a bit too much in love with its luscious romanticism – and it falls hard for Mary herself, surely one of the worst queens ever – but despite all that, it has an entertaining quality that never lets you down.

The film picks up with the recently widowed Mary (Vanessa Redgrave) essentially being chucked out of France after the death of her husband the King, and swiftly being sent back to Scotland to take up the throne there. Problem is: the very Catholic Mary isn’t exactly the choice of the lords of Scotland – led by her bastard brother James Stuart (Patrick McGoohan). Mary’s Catholicism also threatens to destabilise the relationship with Protestant England – particularly because she is the nearest successor to Elizabeth I (Glenda Jackson). But Mary lacks Elizabeth’s tactical understanding of ruling and is guided by her heart – leading her into a disastrous marriage with feckless alcoholic Henry Darnley (Timothy Dalton).

Mary Queen of Scots is a stately picture, which uses its location shots, costumes and production design to tell its familiar story with a sweep and relish that effectively hides the lack of inspiration in its film-making. Just as in Anne of the Thousand Days, Charles Jarrott shows he’s a fine producer of middle-brow entertainment, safe costume dramas that aren’t going to challenge anyone’s perceptions or give you any real wow moments of filming. He’s happy to set the camera up and let the actors do their thing, with the script ticking off the great events.

That’s what you get here. It’s a film that could have been a lot more of an exploration of the rivalries and different life philosophies of its feuding queens. But it doesn’t quite connect with that. This is partly because it can’t quite bring itself to engage with the reality of Mary herself, preferring the popular romantic image. The film doesn’t want to admit that many of Mary’s decisions were, to put it bluntly, completely misguided bordering on wrong. It is in love with her romantic image – and not as enamoured with Elizabeth’s wiser, more pragmatic, manipulative rule. It’s this rule by heart rather than head the film finally holds up for praise.

It doesn’t help that Vanessa Redgrave feels miscast in the lead role. Redgrave is too sharp an actor to convince as someone as easily led and foolish as Mary. She looks too shrewd, she feels too smart. Redgrave compensates by speaking softly and giving a lot of love-struck eyes to various male actors (principally Nigel Davenport’s bluff, masculine Bothwell), but it doesn’t quite work. It’s like she’s struggling to find the character – and to find the balance in a film that doesn’t want her to be seen as too stupid, while the viewer is left slapping their foreheads at every action she carries out.

This feeling stands out all the more with Glenda Jackson’s casting as Elizabeth. Having just finished playing the same role in a landmark six-part TV series, Elizabeth R (which covered a lot of the same ground), Jackson here confirms that she was the definitive Elizabeth. As smart and shrewd an actress as Redgrave, Jackson’s natural firmness marries up very well with these qualities to make the perfect Virgin Queen. There have been so many others who have taken on the role, but Jackson is simply perfect in this role – she becomes Elizabeth. Her Elizabeth is clever, manipulative, cunning but also quick tempered, capable of great wisdom but prone to moments of passionate lashing out.

The rest of the cast is a familiar parade of character actors – British actors of this generation made a living from films like this! Timothy Dalton stands out as a foppish, clearly useless Darnley (here reimagined as a syphilitic bisexual with anger management issues), as does Ian Holm as a cool-headed, would-be power behind the throne David Riccio, who meets a tragic end. Daniel Massey does a decent job as Leicester (though I can’t shake memories of Robert Hardy in the same role in Elizabeth R – was he busy at the time?), Trevor Howard gets saddled with a lot of plot as Burghley. Up in Scotland, Patrick McGoohan has a lot of fun as a scheming Earl of Moray.

All of these actors fit comfortably into the slightly browned, grainy photography style of films of this type, and the screenwriters hammer together plenty of incident alongside dramatic invention. The focus on the soap opera of Mary’s three marriages (she’s widowed in the opening moments of the film) leaves plenty of scope for invention, from Darnley and Riccio’s affair to the inevitable non-historical meeting between Mary and Elizabeth – it seems like every drama going from Schiller onwards has invented a meeting between these two as a dramatic highpoint.

This final scene captures the lack of thematic depth to the film. In a film that had focused more on really comparing the differences between the two, this could have been the culmination of a debate running through the film (can you rule with a brain but not a heart?). Instead it misses the trick, and becomes a final game of one-up-man-ship, which the film allows Mary to win because she is the more romantic figure.

It’s well mounted and assembled like many other films like this – but it’s not the best of its genre, and you do sometimes wish for something that had a little more meat on its bones.
Email ThisBlogThis!Share to TwitterShare to FacebookShare to Pinterest
Labels: 1971, British Films, Charles Jarrott, Daniel Massey, Glenda Jackson, Historical epics, Ian Holm, Nigel Davenport, Patrick McGoohan, Timothy Dalton, Trevor Howard, Tudor history, Vanessa Redgrave