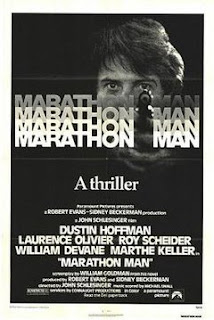 The 1970s were the era of the conspiracy thriller. These were deliberately enigmatic, almost opaque, mysteries in which a humble individual was thrown up against sinister forces, backed by equally shady governments. Marathon Man is a stylish (if rather impenetrable) mystery that offers some gripping moments but gets bogged down a little too much in pleasure at its edginess, darkness and professional assurance.

Thomas “Babe” Levy (Dustin Hoffman) is a post-graduate student working on a re-evaluation of the McCarthy era, partly aimed at clearing his father’s name (who committed suicide while under investigation). Babe’s brother Henry “Doc” (Roy Scheider) works for a shady government organisation, and has recently narrowly avoided assassination twice in France. Doc suspects the killers were sent by renegade-Nazi Dr Christian Szell (Laurence Olivier). Szell’s New York-based brother was recently killed in a car crash, and with his death Szell has lost vital access to his cash reserve of diamonds in a New York bank, which he needs to maintain his safety in Uruguay.

I hadn’t seen Marathon Man for several years, and I was struck by how long it takes to get going: it takes a solid 45 minutes to get to the point. Huge swathes of the opening act of the film is all about getting the set-up and atmosphere, rather than establishing the story. It also seems to be about setting up as complex as possible a context for a film that boils down to a pretty straightforward plot. Nearly all the action that Doc gets up to in Europe is pretty much impossible to work out and never seems to tie in with the rest of the plot once it starts (exciting as it is to watch him dodge assassination attempts). Even the marathon running of the hero, and his relationship with Marthe Keller's mysterious swiss woman doesn't in the end really tie in that closely with the story.

But then that’s often the way with Marathon Man. It’s a film in love with atmosphere, its Hitchcockian tricks and its brooding creepiness more than with logic, story or even (really) character. It’s pretty hard to work out what’s going on, and the muttered plot revelations and Schlesinger’s grimy, often deliberately obscure, filming style doesn’t always help the humble viewer work things out. It wants to be like other 70s thrillers and juggle huge events – but it’s actually a rather small-scale, humble film telling a deliberately dreary story, scored with a very 70s combination of electronic noises and plonking piano notes. Plot wise it never really explains what is it about, and gets so bogged down in cross and double cross that it eventually loses its own way.

Where the film does succeed is its individual scenes. Mention Marathon Man and anyone who has heard of it will immediately say “the dental torture film?” They might even say “Is it safe?”. Marathon Man’s dramatic centre-piece is this unnervingly taut torture scene (not too graphic it has to be said – gosh violence in films has moved on since 1976!) where Szell questions Babe (just the one question repeated over and over again) while using his dental skills to “encourage” Babe to answer (ouch!). Ever been even slightly squeamish about going for a dental check-up? This probably isn’t the film for you (heck even one of Szell’s murderous henchmen can’t watch).

Schlesinger shoots this scenes extremely well, with the camera lingering effectively on everyday dental tools that become dreaded torture devices. Schlesinger builds sequences around action and violence very effectively: escape attempts by Babe are gripping and fight scenes are extremely tense, particularly Doc’s fending off of an assassin in a Paris hotel room.

That scene also highlights another effective part of Schlesinger’s direction of the film: his use of bystanders. The life and death struggle between Doc and an assassin is witnessed across the street by a wheelchair-bound old man powerless to intervene. The opening road-rage deaths of Szell’s Nazi brother and a furious New York Jew are intercut constantly with the reactions and confusions of people in New York’s streets. In the film’s finest scene, Szell has to undertake a terrifying (for him) walk through New York’s Jewish quarter to collect and value his diamonds. His paranoia and fear of being recognised mean he sweatily watches every face. When he is recognised by an old woman – who shrieks for help from bemused passers-by – you really feel Szell’s fear that this woman will turn the mass of watching New Yorkers into a lynch mob. The bystanders really add depth to the film’s paranoia – they are both dangerous and also help to isolate the characters.

The film’s main strength is Laurence Olivier’s stand-out sinister performance as the Mengele-like Szell. Terrifyingly cold, paranoid and sadistically proud, Szell is a truly great villain, and Olivier channels all his Shakespearean experience into turning him into an iconic villain. The film also really works matching Olivier’s imperious old-schoolishness with Hoffman’s edgy, brittle method (the famous anecdote from the film was Olivier’s aghast reaction to Hoffman’s decision to prepare for the torture scene by not sleeping for three days: “Dear boy, would it not be easier to just act?”).

Hoffman is actually very good in the film as a man out of his depth from the start who slowly becomes as hardened and dangerous as the people chasing him. In fact Hoffman, is so involving and empathetically frightened in this film (his desperate range of answers to “Is it safe” are really affecting) that you overlook that he is clearly far too old to be playing a college graduate. Roy Scheider is similarly good as his domineering, but loving spy brother.

But it’s Olivier’s mastery of nastiness that really makes the film lodge in your mind. Schlesinger’s film is often long-winded, opaque and confusing, but Olivier delivers a master-class in imperious nastiness. Szell is a nightmare image of the well-spoken, polite monster and Olivier’s eyes carry a spark of intense menace. Honestly I could happily watch just the scenes he is in – particularly that masterfully performed street walking scene – and be happy to stick with that. The rest of the film is often a bit of a murky mess, but when Oliver is at the centre you forget all that. Marathon Man is a conspiracy thriller so confusing I think it confuses itself – but in the individual scenes it often brilliantly captures dread, discomfort and fear.
Email ThisBlogThis!Share to TwitterShare to FacebookShare to Pinterest
Labels: 1976, Conspiracy, Dustin Hoffman, Fritz Weaver, John Schlesinger, Laurence Olivier, Marthe Keller, Roy Scheider, Spy thrillers, Thrillers, William Devane