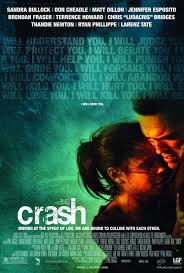 If you had to name the least popular Best Picture winner, there is a fair chance the name you’d come up with Crash. Crash was a surprise winner in 2005, beating out Ang Lee’s tender gay-cowboy classic Brokeback Mountain. Crash was a little independent movie, filmed in and around Los Angeles, that seemed to be tackling big themes – racism, humanity, fate, blah blah blah. To be fair, Paul Haggis’ film is giving it a go. But what you get is just hugely, well, average. It’s not a film that has aged well, and it’s not a film that has enough depth to it to overcome the general cynicism towards it.

The film follows a kaleidoscope of events in Los Angeles, each of which revolves around clashes between different races, with stories that are shown to interlink. So we have an ambitious DA (a miscast Brendan Fraser) and his wife (a pretty good Sandra Bullock) carjacked by two gangbangers (Ludacris and Larenz Tate). A TV director (Terrence Howard) and his wife (Thandie Newton) are pulled over then assaulted by a bigoted cop (Matt Dillon), despite the fears of his nervous liberal partner (Ryan Phillippe). A locksmith (Michael Peña) deals with racial suspicions from the DA’s wife, and from a Persian shop owner (Shaun Toub), who is himself the victim of racial abuse. A cop (Don Cheadle) and his partner (Jennifer Esposito) investigate two undercover cops who shot each other, monitored by the DA. And so it goes on.

Crash could be pretty much relabelled Racism Actually. In fact, it shares a lot of traits with Richard Curtis’ loosely assembled series of shaggy dog stories, feeling as they do like off-cuts and half assembled scraps of ideas from Haggis’ writing desk. But what he ends up wheeling out here is a manipulative, cliché-filled pile of earnest claptrap, in which basically a series of unpleasant characters behave unpleasantly towards each other. You can see why the ageing academy might have warmed to it – it’s a film that looks at racism, by exploring how, gosh darn it don’t you know “everybody is a little bit racist” sometimes.

On top of that, Haggis’ film relies overwhelmingly on coincidence and the tired “we are all linked together” clichés. It wants to try and make big statements about the prejudices and victimisation that we all suffer in our different ways – but it delivers them in such a clumsy and manipulative way your nose ends bruised by the number of points hit on it. For starters, do people really throw around racial slurs as readily and immediately as the characters in this film do? Surely the real danger of racism is not the people who shout racist nicknames and get angry immediately – isn’t the real danger of racism its incipient nature, the quiet whispers behind closed doors or the barriers gently but firmly put in the way?

This film turns racism into something loud, obvious and crass. And then it produces a film that does the same thing. The script is full of scenes which never feel real, – every conversation in the piece turns into a clumsy series of “we all hold prejudiced views” or “I’ve got more depths than you think” statements that always feel fake. Not once do the characters sound like real people. It’s the sort of clumsy, crappy, thuddingly worthy film-making that ostentatiously believes itself to be great film-making, when in fact it’s as average as cornflakes. 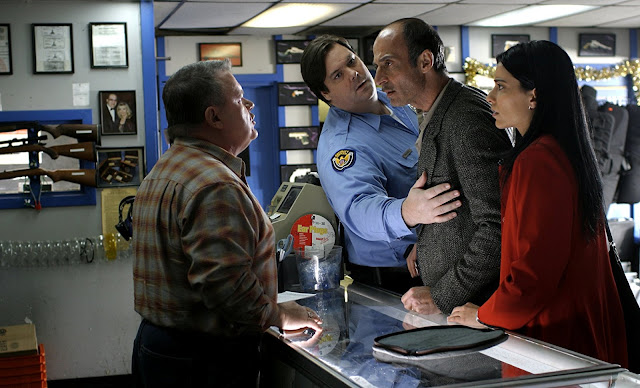 Even the more effective moments only work because they are so manipulative: the confrontation at gunpoint between the locksmith and shop owner, and the rescue of Thandie Newton from a burning car by Matt Dillon’s brutish cop. When they are happening, these moments are strangely gripping – but literally the instant they finish, you are struck by how Haggis has filmed them in such an operatic, balls-to-the-wall way you would have to work pretty hard not to be swept up in them. Effective manipulation is still manipulation – and manipulation really shouldn’t be this easy to spot. Certainly not within seconds of it happening.

But nearly all the characters are so simple and cookie-cutter that, despite the quality of the acting, you never connect with them. It doesn’t help that Haggis’ unsubtle screenplay is desperate to point up “surprise” personality twists – the “you think they are like this, but look: here they behaving totally differently. People are more complex than you think!” card is played so often it starts getting worn out. All of this serves to boil down to a trite message that when we try and get along with each other everything eventually might work its way out. Oh please, give me a break.

The acting, though, is actually pretty good. Sure Brenda Fraser is horribly miscast, and Don Cheadle is stuck with a terrifically boring cop who has to hold some of the narrative threads together, but there are plenty of decent performances. Sandra Bullock gets to show she has some solid dramatic chops, Thandie Newton is a pretty much a revelation as a seemingly shrewish wife, Terrence Howard mines a lot out of a clichéd middle-class black man going through a mid-life crisis. Ludacris and Lorenz Tate are excellent as the two gangbangers, although their dialogue and actions never feel real at all. Michael Peña is very endearing as just about the only outright likeable character. Dillon got a lot of praise (and an Oscar nomination) as the racist cop and he is fine (though dozens of actors could do what he does here), even though the character is thin as paper and relies on having the two of the best impact scenes.

Dillon’s character is a good example of the film’s moral shallowness. Perhaps it’s the #MeToo era, but do I think that Dillon’s clearly racist manner and his sexual assault on Newton’s character is cancelled out because he saves her from a fire and treats his dying Dad well? I mean, what is this sort of laziness? The film says “ah ha look viewer you thought he was a bad guy, but look at his depth”. So forget the sexual assault because he saved his victim’s life the next day. Wow. Don’t get me started on the contrived weighting of the scales the film puts together so that our opinion is shifted on Phillipe’s good cop. The film is full of this sort of clumsy, ham-fisted, chin stoking, liberal garbage that feels overwhelmingly patronising.
But then this is a film that doesn’t trust you to think. It is the ultimate middle-class, hand-wringing exercise in “oh if only we could fix the world through good things” nonsense. It shouts and shouts and shouts at you about racism, but never really tells you anything other than that bad-tempered, ignorant people will do bad-tempered ignorant things. It smugly says “of course we are better, but guess what viewer, this sort of thing does happen”. Only of course the script is so thin, the general film-making so thuddingly average and unsubtle, the story and morality so shallow, that its preachy hectoring only really serves to turn you off.  Anyone with a brain will get the message within the first 10 minutes. The film takes another hour and a half to catch up with you. The worst Best Picture winner ever? It’s gotta be up there.
Email ThisBlogThis!Share to TwitterShare to FacebookShare to Pinterest
Labels: 2005, Best Picture, Brendan Fraser, Don Cheadle, Jennifer Esposito, Keith David, Ludacris, Matt Dillon, Michael Peña, Paul Haggis, Ryan Phillippe, Sandra Bullock, Terrence Howard, Thandie Newton, William Fichtner