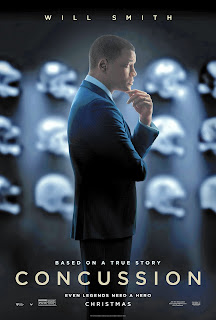 In 2002, Pittsburgh pathologist Dr Bennet Omalu (Will Smith) carried out an autopsy on deceased former Pittsburgh Steelers centre (and American Football legend) Mike Webster (David Morse). What he discovered – that the high speed impacts of American football massively increased the chances of players suffering serious brain damage and debilitating mental conditions – was to change his life, and lead to a six-year battle to get his research acknowledged by the NFL. This film dramatizes this story – with the obligatory inventions and dramatic changes (Landesman describes the film as "emotionally true" if not "factually true").

Concussion is a fairly straight-forward, rather uninspired “one man’s struggle” kind of film. There isn’t much in it, to be honest, that is particularly unique or different from films of this type we’ve seen before. We’ve pretty much all seen the trope of a man pushing to get himself heard against the scorn, disbelief and anger of those who need to hear him the most. Does Concussion add anything new to that? No not really.

Peter Landesman shoots the film with a methodical, workmanship that hits all the expected beats. The whole film plays like Michael Mann’s The Insider-lite: with the difference that the NFL never really convinces as an actual threat in the way Big Tobacco does in that film. The film falls over itself to repeatedly tell us how powerful the NFL is but never really shows us in the film how that power might work. When the FBI drum up charges against Omalu’s mentor, you never get the sense that this is being directed by the NFL themselves. They are simply never that dangerous an opponent.

Maybe because this is a film that doesn’t want to run the risk of saying America’s beloved sport is dangerous. It wants to blame bad eggs rather than an institutional failure – hence the repurposing of former player Dave Duerson as a sort of braggart bully. The characters playing the NFL heads are relegated to TV screens in the corner. It never wants to really look at the risks of this institution wilfully burying evidence their sport is dangerous, or question whether this sport is even a good idea. Throughout the world of sport, there are ungoing debates about the health risks of sport, from the danger of heart conditions to early onset dementia in football players from heading the ball. This film fails to really tap into any of this.

As such, there isn’t really any dramatic force behind the film: it doesn’t manage to suggest Omalu is in danger and it doesn’t want to turn the NFL into actual antagonists. It treads a weary middle ground. If the NFL was really positioned as a threat, then the pervasive presence of its stadium in Pittsburgh would be sinister. It isn’t for all Landesman tries to shoot it in that way.

Despite this though, Will Smith is very good as Omalu. The film’s version of the doctor seems a little different from the quirky, socially awkward real-life Omalu. But Smith nails the home-run scenes of Omalu raging at his research being disregarded. (In real life it was easy for the NFL to dismiss Omalu by using his Nigerian heritage (his ‘otherness’) quietly against him. The film doesn’t touch upon this by the way.) Smith has all the charisma the role needs and brings it a certain James-Stewartish moral decency.

The rest of the cast don’t get much else to play with. Alec Baldwin is pretty good as a former NFL doctor trying to ease his conscience (although his accent got some criticism). Gugu Mbatha-Raw has a fairly thankless role as the supportive wife, but does it well. Albert Brooks might be a bit too much at times as Cyril Wecht, but David Morse plays Mike Webster with sensitivity.

The film is not always that subtle. Shots of Webster haunting Omalu are a bit much. Omalu’s unhappiness and frustration are telegraphed using familiar clichés, from raging impotently at stony faced law officers, to trashing a room in his still-under-construction dream home in Pittsburgh (having read the source book it’s hard to believe the real Omalu ever did something like this). The timeline of the film isn’t always clear. There is a little too much lingering on funerals and tear-stained relatives for easy emotional hits.