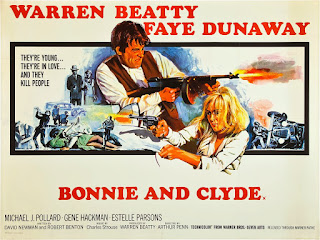 Bonnie and Clyde can lay claim to being one of the most influential American films ever made. It came out of a seismic cultural change in America, as old style Hollywood royalty faded out and a new generation stormed the barricades to make films that felt rougher, rawer and told complex stories in shades of grey.

Clyde Barrow (Warren Beatty) and Bonnie Parker (Faye Dunaway): drifting youngsters, not interested in accepting a conventional life. They want to go where they please and take what they please. And if some people get hurt – well they can justify that to themselves. As the poster famously said: “They’re young. They’re in love. And they kill people”. In a deliberately disjointed narrative, where time is unclear, the two meet, head out together, commit crimes, stay on the run and are eventually killed by law enforcement. The story is simple – it’s the telling of it that matters.

Bonnie and Clyde latches on to a counter-culture vibe that was growing in strength at the time. But what the film does so brilliantly is subvert this. It invites us to identify to with the romantic, Byronic yearnings of its heroes, who see themselves as free spirits, living a life of idealistic, unconstrained excitement. But the film also has a clear eye on the trail of violence they leave behind them, their lack of regard for this and the impact on the victims. Because make no mistake, these dreamy killers get more and more violent as they go on.

The film turns these two killers into would-be celebrities – guys who want to project a certain image of themselves to the world (down to mailing the papers photos and poems about themselves). They enjoy the notoriety and their self-proclaimed mythology. Clyde walks into banks and gleefully announces he’s with the “Barrow gang”, as if half expecting someone to ask for his autograph. Later in the film, as Clyde reads their press coverage out loud, with CW Moss like a star-struck groupie, the film never forgets the two of them were basically nobodies, who wanted to feel like somebodies.

And it lets you enjoy the romance of this. There is something fairy-tale like in the film about Clyde picking up Bonnie from outside of her home, taking her into town for flirting and robbery. The whole film continues this dreamy logic, with time jumps and scenes that don’t necessarily link up directly with each other.

But then the violence takes over. Wow is Bonnie and Clyde a film that lets you know about the impact of bullets. Gun shots don’t just maim or wing, they rip bodies apart. The japey feeling of their bank robberies gets dispelled about half an hour into the film when Clyde shoots a bank teller in the head from point blank range (“him or me”, he later tells his brother). The gang are so incompetent, that the film is frequently punctured by shoot-outs in which no mercy is shown to anyone.

This is of course hard for the gang to reconcile with their self-image as Robin Hoods, so they mostly forget about it. Clyde won’t steal money from ordinary people (though he’ll happily steal cars, or beat a grocery store clerk into a coma). They playfully tease and taunt a captive US Marshal – until he spits in Bonnie’s face at which point violence ensues. Only at points do the gang seem to have the slightest idea of the dangers: after kidnapping Gene Wilder’s nervy car-owner and his fiancé, a happy-go-lucky Evan Evans (both excellent), merry conversations in the car with the gang are suddenly halted when Wilder admits he’s an undertaker – Bonnie immediately demands they are thrown out and the next shot is her weeping in a field. She doesn’t seem to understand the connection, but we can.

The film is superbly put together. Warren Beatty produced the movie practically from its inception. Robert Benton and David Newman’s script was intended as a French New Wave film – evident in its looseness, its lack of old-school values, its violence, its focus on naïve dreamers who choose the easy way out – but Beatty took the script, re-crafted it with Robert Towne (billed as special advisor) and decided the film needed an American director, not a Truffaut or Godard. He brought on board Arthur Penn, and the two worked together (fought together) closely to bring this radical, edgy, jittery, electric film to the screen.

Penn and Beatty pushed themselves to some of their best work. Beatty is terrific as the vainglorious Clyde – whose determination in crime is matched by his impotence in the sack (the film wisely doesn’t overplay Clyde’s impotence as an ironic theme, but lets the audience draw its own conclusions). He also produced the film expertly. Penn’s direction is sublime, marrying the finest elements of French New Wave cinema with old-style Westerns.

The film is restless and energetic, and intermixes moments of fun and frivolity among the gang with ominous danger and violence. The camera jitters and shakes, while throwing us into the action – the film is masterfully edited – while at other points sailing on like a neutral observer. The film has a neat satiric edge, and Penn uses banjo music masterfully to ironically contrast with much of the action we see on the screen. The characters – all of them – seem to spend so much time talking about their press coverage because they have so little to say to each other. Even the lovers only really seem to find a moment of quiet devotion shortly before their death. It give you violence as entertainment, but also tells you effectively and quietly how appalling and dangerous violence is.

The acting is similarly extraordinary. Beatty is wonderful, as is Dunaway as an impossibly young, romantic Bonnie who adapts with alarming swiftness to killing and robbing. Michael J Pollard is excellent as the slightly simple, eager young car mechanic who hero-worships the couple. Hackman and Parsons are both excellent as Barrow’s older-but-not-wiser brother, and his wife who seesaws between resentment, fear and an imperious delight in her new-found infamy.

Penn’s brilliant film deconstructs the mythology of criminals to show the emptiness underneath, their shallow self-regard and lack of insight. It does this while still managing somehow to remain affectionate towards these two murderous dreamers. Bonnie and Clyde is a sublime modern Western, a commentary on fame, a dissection of violence and a great black comedy. Shot with youthful energy and an influential lack of traditionalism, it’s a film that always feels modern and necessary.
Email ThisBlogThis!Share to TwitterShare to FacebookShare to Pinterest
Labels: 1967, Arthur Penn, Crime drama, Denver Pyle, Dub Taylor, Estelle Parsons, Faye Dunaway, Gangster films, Gene Hackman, Gene Wilder, Michael J Pollard, Warren Beatty