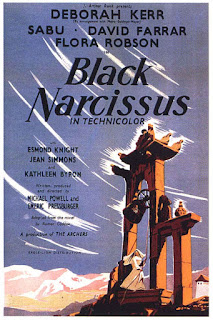 In 1947, people hadn’t seen anything like Black Narcissus. Its triumphant technicolour was like nothing that had been made before – and watching it now on a brand new, shiny restoration, it’s still overwhelmingly impressive. Alongside this beautifully shot action, we have a storyline surprisingly modern in its acute psychology and questioning of the strengths and weaknesses of human nature.

Sister Clodagh (Deborah Kerr) is given leadership of a group of nuns in a remote Himalayan harem building converted into a nunnery. But the isolation of the mountains and the strange atmosphere of the harem bring out weaknesses in the characters of the nuns, leading to profound challenges to their spiritual and mental well-being – not least Sister Ruth (Kathleen Byron), who becomes increasingly pre-occupied with local land captain Mr Dean (David Farrar).

Powell and Pressburger’s film is a brilliant, slightly hard to interpret, psychological gothic drama, a du Maurier-style sexually charged drama set in an exotic Indian location which the nuns struggle to understand. It’s a curious melange of scenes, often moving swiftly, sometimes only with narrow bridge scenes, meaning you soon get as lost in how much time has passed as the nuns themselves. Several key events take place off screen, and the native Indians are curious, unknowable and strangely intimidating in their distance and coolness.

All this is to help build the audience into feeling as unsettled as the characters themselves. It’s a film about the struggles between expression and repression. The two principal nuns – Sisters Clodagh and Ruth – both show elements of this. Both are drawn towards the earthy, manly but still patrician Dean, but both handle these emotions in very different ways – one by denying those feelings, another by trying to embrace them. All of this takes place in a distancing and intoxicating environment, where the convention rules of life seem suspended.

For Sister Clodagh, Dean serves as a bridge back to her own frustrated romantic feelings for an old flame – whose failure to propose guided her towards taking the veil – and elements of her warmer persona (witnessed by us in flashback). But Clodagh resolves never to make herself a slave to these feelings, and these moments of remembrance seem to make her cling all the more to her order – even while the film suggests that it is a strange mixture of pride, insecurity and fear as well as faith that motivates her.

By contrast, Sister Ruth – already acknowledged by the Mother Superior as not an obvious choice for the sisterhood – increasingly loses her grip first on her faith, then sanity, as she struggles with the feelings she clearly has for Dean. This quiet obsession has built up in her mind into representing all the desires for freedom and independence she feels while in the order. Where Clodagh resolves to cling closer to the repression of her feelings, Ruth rejects this very idea and determines to express herself – even as it costs her everything. 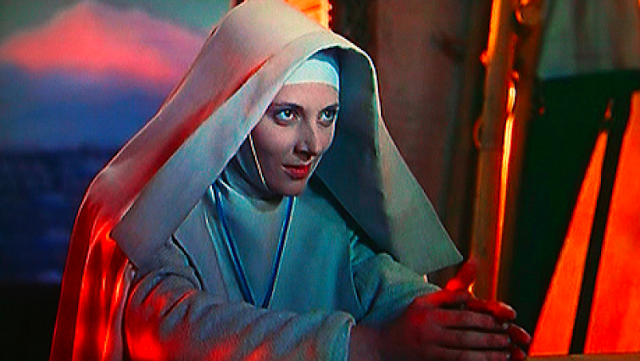 This heated growing madness is powers the film – and Kathleen Byron provides most of the drama with a stunningly unhinged performance, which builds so quietly (almost in the background of the film) that it never becomes wearing and also surprises with the extent of her unhinged delusion. One particular night-time encounter with Clodagh sizzles with rival agendas – one woman using a lipstick, the other using a Bible.

Powell (and it was Powell who largely directed these Archers pictures) uses a variety of techniques to develop this unease. Several shots are direct POV shots, with the audience becoming one of the characters, giving us the slightly unsettling feeling of being addressed by the actors. Quick tableaux editing gives us economic storytelling and a sense of events building swiftly towards a head (several sequences use a series of quick cuts of characters reacting to events). The camera uses a series of close-ups of sweaty foreheads or dizzying, vertigo inducing shots of the Himalayas to increase the unease. A later shot shows Sister Ruth moving through a shimmeringly filmed jungle, bringing a sense of confused eroticism to the picture.

Sexuality is a major theme of the film – and the characters have a series of acknowledged or unacknowledged sexual interests in each other. The music and camera work develop a sense of heated intensity on the mountain that suggests a simmering heat that unnerves the mind and throws open the temptations of physicality. Old wall paintings from the harem of bare-breasted women seem to be a constant presence – no wonder feelings are running high.

Jack Cardiff’s photography is simply extraordinary – it’s hard to believe none of this was filmed on location and most of it was shot in a studio – and this is still a film today that is hugely beautiful. The production by Alfred Junge is hugely impressive, with the nunnery a triumph of mismatched themes. 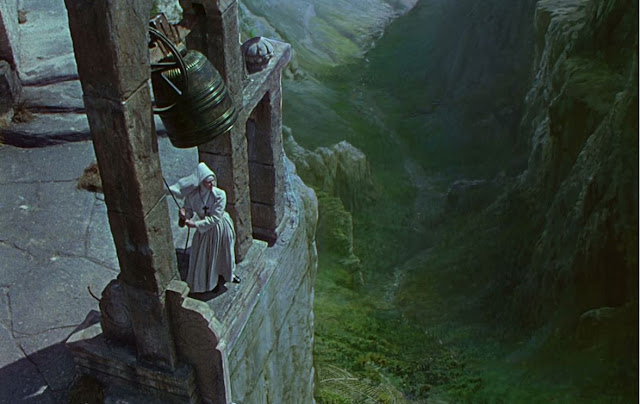 It’s not perfect. It’s a bit awkward to see actors blacking up. Some of the acting is quite OTT or stagy – in particular May Hallatt at points – and the film’s occasional delight in its visual appeal means its themes don’t always get the exploration that they deserve. One of the disadvantages of its deliberately vague timeline is that sometimes events happen too soon – or we don’t get enough sense of why they are happening. But these are blemishes.

This is a masterfully made picture, still beautiful to look at with impressive performances from Kerr, Byron, Farrar and many of the rest of the cast. It’s a surprisingly gothic melodrama by the end, with reds splashed across the screen with an imposing sense of threat. Still one that needs to be seen: and the end is so melodramatically gothic considering where the film started that the fact it doesn’t seem hugely jarring is an enormous tribute to the talents of those involved.
Email ThisBlogThis!Share to TwitterShare to FacebookShare to Pinterest
Labels: 1947, Christian movies, David Farrar, Deborah Kerr, Emeric Pressburger, Esmond Knight, Flora Robson, Jean Simmons, Jenny Laird, Judith Furse, Kathleen Byron, Michael Powell, Sabu