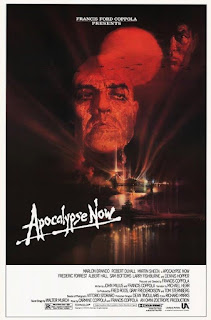 During the 1970s, the director was king in Hollywood. Get a reputation as a visionary director, and Tinseltown fell at your feet. You could spare no expense to put together ambitious, thought-provoking, epic films. If you wanted to shoot on location at huge cost, or reconstruct elaborate sets for single shots, for a huge runtime that catered as much to your ideas of being an artist as it did to crowd-pleasing narrative, then Hollywood would give you keys. It didn’t last: several massive bombs (combined with the huge box office take of Star Wars) shattered the mystique of the director as an ego-mad, flawless genius who had to be indulged, and persuaded Hollywood the future was in big-budget, mass-produced action films (welcome to the 1980s, Hollywood’s nadir).

Apocalypse Now wasn’t one of those flops, like (most infamously) Heaven’s Gate. But, by golly gosh, it really could have been. In fact, in many ways it should have been. It has all the hallmarks: a huge runtime, filmed over a colossal period of time in a difficult location, a plot that mixes action, war and thrills with impenetrably pretentious musings on mankind’s dark soul. A maverick director throwing his own very personal vision at the screen, and damn the consequences. It’s a miracle Apocalypse Now wasn’t a career apocalypse for everyone. It escaped because, despite everything, it more or less gets the balance right between plot and character and pretention and faux-philosophy.

The film is famously a transposing of Joseph Conrad’s Heart of Darkness into Vietnam. Captain Willard (Martin Sheen) is ordered to head down the river to “terminate with extreme prejudice” rogue Special Forces Colonel Kurtz (Marlon Brando), who is conducting his own vigilante war. On the boat trip down the river, Willard encounters a host of increasingly bizarre and surreal scenes, from war-mad Colonel Kilgore (Robert Duvall) to a seemingly leaderless battle over a bridge, a playboy bunny show and a compound of ex-French colonials. And that’s before he even arrives at Kurtz’s compound and things get really strange.

Apocalypse Now is almost impossible to separate from the bizarre, tortuous route it took to get to the screen. Originally scheduled for a few months, the film took over a year to complete. A typhoon destroyed all the sets in the first two months. Original star Harvey Keitel was dismissed after a week (as his performance wasn’t right): his replacement, Martin Sheen, had a near-fatal heart-attack partway through filming. Marlon Brando not only turned up the size of a buffalo but refused to learn (or even speak) his lines. A year into production, the film had no ending. Coppola put his entire fortune up as collateral to complete the film. It was a nightmare.

But yet somehow what emerged has a sort of force-of-nature quality to it. Even though parts are basically pretentious rubbish, despite the fact I have twice fallen asleep in this film, despite the fact it is far from being a film that trades in complex ideas and offers profound insights, it still has a hypnotic quality about it. It’s done with a real force of commitment, a genuine labour of love, a film that doesn’t leave anything in the locker room but throws it all at the screen. The quality of what lands may sometimes be questionable, but the commitment with which it is thrown is beyond doubt.

And in a world of cookie-cutter films, it’s hard to have anything but respect and regard for a film that is so defiantly its own animal, that tells its story in its unique way. It’s perhaps one of the first “experience” films: no film could of course communicate what it was like to serve in Vietnam, but this film perhaps gets close to the surreal, drug-fuelled madness in that conflict.

Because Apocalypse Now is a very surreal film. Its plot is extremely thin, and each section of its (mammoth) runtime is all about experiencing another element of the American experience. In the commentary, Coppola talks about the river trip being partly a journey from the present into the past, a journey back not only into the history of the conflict (and its different stages) but also the regressing of mankind itself into a more primitive, malleable, basic state. It’s a big lump for a film to bite off – and I’m not sure if the idea really comes across without you knowing it. The real impression you get is of rules of society being left further and further behind.

The arrival at Kurtz’s compound is the fufillment of this increasingly unnerving story. We’ve seen the madness on the journey, the pointlessness, and the bemused, carefree confusion of the crew. But at the camp we get the overblown, decadent lunacy of Kurtz. Brando dominates the final 30 minutes of the film, although his monologues are meaningless drivel, the sort of intellectual point-scoring you could hear in a sixth form debating society. To be honest, iconic as Brando’s appearance is, his performance of mumbling battiness is actually a little awful (like one big practical joke from the actor) and the film’s momentum grinds to a halt while he babbles on.

In fact, so self-indulgent is Brando that in a way it’s a sort of tribute to Coppola’s mastery of cinema that he makes this pompous character make any sense at all – or that he makes this sort of nonsense even remotely watchable. But again it’s the hypnotic pull of the film: Coppola builds towards a chilling, haunting final sequence of Willard and Kurtz’s final confrontation intercut with The Doors’ The End and the real-life slaughtering of an ox by a crowd of real-life villagers (they were going to kill the animal anyway but offered to do it for the camera). Coppola somehow turns all this into iconic cinema, even though, viewed objectively, it’s overblown, indulgent, pretentious rubbish.

The whole film is a testament to hewing compelling filmmaking out of breathtaking insanity. After the film departs in the boat, most of reason, sense and conventional story-telling depart with it. Information only gets conveyed through rambling monologues from Willard. The crew of the boat get into scraps that reflect heightened versions of the American experience in Vietnam – from a war crime as the crew shoot-up what turns out to be an innocent boat, to an attack from unseen tribesmen with spears from the mists of the shore. Sam Bottoms, as surfer-turned-GI Lance, is our guide of a sort here – as he gets more stoned, so narrative logic departs with his senses.

What keeps the film going throughout is the masterful film-making. Coppola shoots the bizarreness with brilliant, visionary imagination. As a social theorist he’s pretty basic – man is, by the way, a savage animal and the Americans didn’t know what they were getting themselves into in ‘Nam – but as a film-maker he’s one of the best. Who else could have made three hours of episodic boat journeys so strangely compelling? The film is crammed full of great scenes and moments which rarely feel like they tie together – in fact, they could almost be watched in any order – and there is barely a character in there, but the film feels like its throwing you into the madness of Vietnam.

Even the sequence with a bit more narrative is still laced with absurdity. Kilgore’s helicopter assault on a village – and its use of Wagner blaring from helicopters to scare the Vietcong – is justly famous. This is a bravura film-making – and as much a tribute to the astoundingly amazing editing and sound work of Walter Murch as it is the photography of Coppola. Like most of the rest of the film it is visually outstanding, but it also has the film’s best writing (in the quotable but also strangely subtle characterisation of Kilgore) and also the film’s most iconic performance in Robert Duvall. Duvall is terrific as the war-loving, but strangely childish Kilgore, obsessed with surfing and with an ability to live totally in the moment.

This sequence doesn’t hesitate in showing both the brutality of war – and also the insanity of our commanders. Kilgore is genuinely dreading the end of the war, and you can see why he would since he is clearly having a whale of a time bombing places. Kilgore is a lovable, quotable badass doing what needs to be done – but the film doesn’t forgot that he is also an insane soldier with no off-switch. And Apocalypse Now never really glamourises war, for all the excitement and beauty of watching those helicopters come over the horizon.

It’s the artistry in its film-making, and the genuine effort and work that helps make it a demented classic. Walter Murch’s sound design and editing is possibly flawless – this might be the best edited and sound designed movie ever – from the opening moment when the helicopter blade sounds transform into a hotel room fan you know you are seeing something special. Scenes such as Willard’s hotel-room breakdown hum with intensity as they feel genuinely real – that scene in particular feels like Martin Sheen exposing part of his tortured psyche at the time. Sheen is by the way perfect as Willard, a slightly unknowable killer with dead eyes and a dead soul, still aware of the vileness of his world.

Apocalypse Now is a sprawling batty film – and in many ways an intellectually empty one straining at a depth that ain’t there. But somehow, for all that, it still is a masterpiece. Which is in itself a bit of a miracle as it really should be a disaster. It’s pretentious. It’s overlong. It’s very full of its own importance as a work of art (the re-insertion of the long-winded political discussion at the French Plantation into the Redux version doesn’t help). Some of its performances are plain ridiculous, verging in Brando’s case on outright bad. But yet, it’s delivered with such force of conviction, it’s so wonderfully assembled, so hauntingly shot and edited, that it hammers itself into your brain. You literally can’t forget it, for all its many, many flaws. Despite yourself, you find yourself forgiving it an awful lot – a lot more than you might expect. A mess, but also a classic.
Email ThisBlogThis!Share to TwitterShare to FacebookShare to Pinterest
Labels: 1979, Albert Hall, Dennis Hopper, Francis Ford Coppola, Frederic Forrest, GD Spradlin, Harrison Ford, Laurence Fishburne, Marlon Brando, Martin Sheen, Robert Duvall, Sam Bottoms, Scott Glenn, Vietnam war, War film