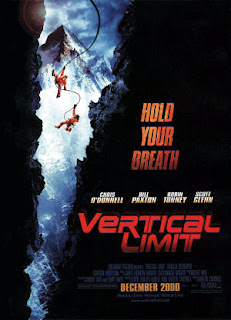 You know a film is in trouble when its heart-rendering death scene at the open is met with howls of laughter from the packed cinema. But Vertical Limit is that kind of film: totally ridiculous, mind-numbingly stupid and filmed in such a melodramatic, over-the-top way it’s impossible to take seriously. It’s a silly, contrived, stupid movie, but at least it’s good clean fun.

Peter (Chris O’Donnell) and Annie Garrett (Robin Tunney) are on a climbing trip with their father when an accident puts them all in danger. Their father sacrifices himself to save their lives, but afterwards the siblings drift apart. Three years later she’s part of mountaineering team taking arrogant millionaire Elliot Vaughan (Bill Paxton) up K2. When disaster strikes (of course!) and Annie, Elliot and wounded Tom McClaren (Nicholas Lea) are stranded up the mountain, Peter gets together a team to head up the mountain to save them. The best way of doing this? Why, carrying nitro-glycerine up the mountain! That’s right, this is a film where our heroes basically carry a series of bombs up a mountain: it’s The Wages of Fear meets Cliffhanger.

Oh lord where to begin? In the very first scene, I horribly misread the relationship between Annie and Peter – so it was a bit of shock, after what seemed like a fair amount of flirting, to have them revealed as brother and sister. But their weird obsession with each other hangs over the whole picture, and is used to justify the people killed in this film to save Peter’s sister. Peter certainly can’t get excited about his nominal love-interest (a bored looking Izabella Scorupco), although that might be partly due to Chris O’Donnell’s balsa-wood earnestness.

But then the whole film is wonkily acted. Bill Paxton is so obviously a wrong-un, he practically twirls his moustache through the whole film. Scott Glenn plays a mystic climber mourning the loss of his wife, like some sort of bizarre shaman. Robert Taylor is wooden as Skip. Alexander Siddig is wasted as a rent-a-Muslim (the film is so old the call to prayer even needs to be explained!). Among the smaller roles, Ben Mendelsohn plays a sort of climbing Crocodile Dundee. None of these actors bring their A-game to this rubbish.

And it is rubbish. Nothing in it is particularly exciting, despite the efforts of Campbell to throw a (literal) avalanche of events at the screen, with characters hanging over cliffs like no-one’s business. None of these action sequences is actually that exciting – some, like a prolonged helicopter drop-off, are frankly dull – and everything has a sort of inevitability about it. You can predict who will die and who won’t, and the film only talks about things that are going to happen: of course Montgomery Wick’s wife’s body will be revealed after one of several avalanches (another scene that provokes sniggers rather than gasps); of course Vaughan will try and kill his fellow survivors; of course Peter will have to come to terms with his dad ordering him to cut him loose at the start of the film.

Most of the mountain climbing effects are not convincing. The opening sequence is obviously filmed at ground level, the passes of K2 look like sound stages. At one point Wick drops the title by saying they are at the “Vertical Limit” where the body starts dying: O’Donnell responds like a forgetful child actor, suddenly remembering he’s supposed to be out of puff in this scene. The very idea of taking nitro-glycerine up the mountain like this is so completely irresponsible and stupid that the film can’t get over it. Needless to say many, many, many more people die on this rescue expedition than are actually rescued at the end. Not that it matters, as Annie and Peter reconcile to continue their odd flirtatious relationship once more!

Vertical Limit is a terrible film. No doubt about it. It’s good to laugh at, I’ll give it that. But it’s got literally nothing else going for it. Nothing. Martin Campbell: how did you deliver something this mundane and stupid?
Email ThisBlogThis!Share to TwitterShare to FacebookShare to Pinterest
Labels: 2000, Alexander Siddig, Ben Mendelsohn, Bill Paxton, Chris O'Donnell, Izabella Scorupco, Martin Campbell, Robin Tunney, Scott Glenn, Stuart Wilson, Terrible Films