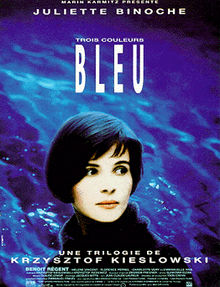 There are few foreign language films that have cemented themselves in film’s cultural history more than Kieślowski’s Three Colours Trilogy. These three inter-linked films – made with French and Polish money – looked (individually) at themes of Liberty, Equality and Fraternity, while using a colour palate and design that reflected one colour of the French flag each. The first film in this interlinking trilogy is Blue, a sombre, intriguing, intimate drama that perhaps wears its intelligence a little heavily on its sleeve.

Julie de Courcy (Juliette Binoche) is the only survivor of a car crash that kills her husband, a famous composer, and her daughter. Lost in grief, Julie decides that she will separate herself from the world and live entirely independently. She rents out her home, distances herself from friends, takes back her maiden name and destroys what she believes to be the only copy of her husband’s final composition – a concert for the unification of Europe. But Julie finds that liberating herself from all worldly connections is not as easy as she hoped.

Blue is a heartfelt, gentle film that throbs with emotional intensity, much of it coming from Binoche’s searing performance of a woman consumed with a mixture of grief and survivor guilt, who sees complete isolation and “liberty” from all connections as the only chance for sanity. Kieślowski’s direction is masterful – patient, stable, quiet and with a brilliant eye for small details. The film is crammed with small moments that speak of peace and quiet reflection – from watching a lump of sugar being soaked in tea, to lingering studies of everything from rooms to streets.

The opening sequences of the film convey this masterful confidence from Kieślowski. The camera is a still observer, alternating between subtle POV shots and gentle, perfectly placed observation of Julie. Every moment of the shocking discovery of Julie’s loss is wonderfully assembled – from the stumbling news from the doctor, to the crackling mini-TV on which she watches her family’s funeral being broadcast. Quietly we see Julie return to her own home – and Binoche bottles up emotion with a resolve that suggests as much her determination not to engage with the pain as it does self-control. No wonder her housekeeper bursts into tears at the fact that Julie isn’t crying.

This all ties in very interestingly with the film’s theme of liberty. Conventionally, we would have had Julie escaping from something to find her own life. Kieślowski’s film more interestingly explores the positive and negative of liberty. Julie chooses freedom from all of life’s connections – but this is shown constantly to be not only impossible, but also less than healthy. Her surface liberty is instead crushing her under the pressure of isolation.

At the same time, the film is partly about Julie learning to free herself from her survivor guilt. Cutting herself off from the world denies her a genuine emotional connection with her husband’s friend Olivier (a puppy doggish Benoît Régent). In the first months of her guilt she sleeps with Olivier, hoping it will get her a bit of peace (it doesn’t). Inevitably, as Julie finds out more about her husband’s life – and as we find out that his music output was heavily reliant on Julie’s secret collaboration – the film becomes a question of whether Julie will allow herself the liberty from her past to continue living.

Because in a way this is an anti-tragedy: it starts with a trauma and is about the survivor learning to continue her life. Kieślowski peppers the film with moments of falling, from items to bungee jumpers on the TV. Slowly, these images of falling progress to include being caught, or shots of the bungee cords snapping the person back from oblivion. It’s a neat, subtle continual reference to Julie’s unconscious search for support.

Particularly as it’s made clear that Julie’s entire personality is all about giving, about loving and supporting people. From her silent collaboration with her husband, to her patient caring for her mother suffering from increasing dementia (another perverse form of liberty), to her forming a reluctant friendship with an exotic dancer in her block of flats (who the rest of the tenants are trying to drive out), it’s clear that Julie’s attempt to distance herself is never going to truly work. A character late on even tells her that her husband had always described her as kind and forgiving – qualities Julie learns to re-embrace.

The wider world that Julie is trying to escape is represented brilliantly throughout by the score of her husband’s (her?) music for Europe. This score – a richly exuberant piece of music by Zbigniew Priesner – constantly intrudes into the action, accompanied by moments where Kieślowski seems to suggest time has stopped as Julie becomes lost in her reflections. Kieślowski uses colour changes and slow zooms to suggest throughout these beats where Julie temporarily becomes lost in the past and memories. The continual presence of the music is perfectly done.

The one element I was less keen on was the over use of blue. From filters on the camera, to backlighting, to objects present in every frame, there is a lot of blue in this movie – every shot has something blue in it. Although this is clever, and clearly thematically intentional for the whole trilogy – I’ve got to be honest spotting this stuff probably took me out of the film at moments. I imagine on a second viewing this will be dramatically reduced – but it’s one of those curses of a trilogy of films that have been so hyped up on the arts circuit, that you are aware of some of its subtle tricks so much that they cease to be subtle.

But Three Colours: Blue is still a masterful, quiet study of grief, loss and yearning, that avoids the obvious and explores different types of liberty and freedom. Binoche is brilliant in the lead role, and Kieślowski sears the brains with images (I still wince remembering a sequence where Julie deliberately scrapes her knuckles over a wall she walks past) and his direction is impeccably sensitive and unshowy, letting the film speak for itself. I can’t wait to watch the other two films in the trilogy – and see how this might affect my views on this first one.
Email ThisBlogThis!Share to TwitterShare to FacebookShare to Pinterest
Labels: Benoît Régent, Emmanuelle Riva, Florence Pernel, French cinema, Julie Delpy, Juliette Binoche, Krzysztof Kieślowski, Three Colours trilogy, Zbigniew Zamachowski