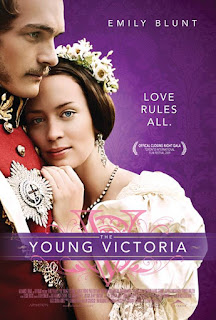 Now ITV’s Victoria exists, it’s a bit strange to go back and watch The Young Victoria. With the love today of long-form drama, and the time it can invest in things, it’s funny to see what the drama took almost 8 hours to do being crammed into an hour and a half here. But saying that, The Young Victoria is still an entertaining, luscious viewing experience which, while it has some strange ideas about certain events, is the sort of relaxing Sunday afternoon viewing that will take you out of yourself.

After the death of William IV (a slightly overripe Jim Broadbent), Victoria (Emily Blunt) is elevated to the throne. Finally able to shed the control of her mother’s (Miranda Richardson) domineering secretary Sir John Conway (Mark Strong), Victoria is determined to steer her own course. But she is surrounded by competing influences, not least from the charming arch-politician Lord Melbourne (Paul Bettany). King Leopold of Belgium (Thomas Kretschmann) dispatches his nephew Prince Albert (Rupert Friend) to England with the express interest of marrying Victoria and controlling her – but Albert and Victoria find themselves as kindred spirits, supporting each other to rule.

The Young Victoria is the epitome of prestige costume dramas. It looks fantastic, the cinematography is ravishing, the production and costume design exquisite. It’s pretty clear what the producers thought would sell the picture abroad. The royal regalia is pushed very much to the fore, and we get some wonderfully sweeping scenes, not least an impressively large-scale coronation. The soundtrack brilliantly riffs on Handel, and Julian Fellowes’ script mixes period regal style with a sweeping feeling of romance between Victoria and Albert.

The film actually does a very good job of repositioning Victoria as a young woman, and gives her a strong quality of self-determination and a desire to be herself in a man’s world. It’s really helped in this by the combination of imperial strength, girlish wilfulness and sharp intelligence Emily Blunt brings to the role. Blunt and the film also aren’t afraid to show that, however much Victoria had guts and determination, she was also quite a headstrong woman not above making emotionally led mistaken decisions. In fact, much of the drama spins out of Victoria learning to try and put these youthful crushes and prejudices aside.

Having said that, it’s interesting that the successful conclusion of the film centres on Victoria accepting that she needs the help of Albert to run the kingdom, and that she needs to remove competing influences for her affection – Melbourne and Lehzen – to focus her affection and loyalty on him. The film frames this as a winning romance and a successful partnership (which it was) – but it’s also vaguely creepy if you think about it. Mind you, since all the affectionate influences on Victoria are implied by the script to be at least partly motivated by self-interest, with the possible exception (eventually) of Albert, it manages to suggest this was for the best.

Albert’s background gets some interesting exploration here. He’s very much presented at first as the tool of Leopold as a means of controlling British politics. But he is far too independent, smart and noble to ever be the means of manipulation. Friend is very good here – his performance is quiet, authoritative but also heartfelt. Fellowes guilds the lily a bit to show his devotion by having Albert shot by a would-be assassin late-on in the film. Historically the assassin’s pistol wasn’t loaded, and Albert didn’t get shot (though Fellowes protests Albert did put himself in front of Victoria and that this intent is what’s important, not whether he was shot or not) but the moment does work – it gives the drama a boost and it’s undeniably moving.

While Albert is presented overwhelmingly sympathetically, interestingly Lord Melbourne gets quite a kicking. Paul Bettany is presented far more as a rival love interest than the sort of father-figure Melbourne was in real life (Bettany is probably 20 years younger than the real Prime Minister). Melbourne is shown as cynical, controlling, manipulative and overwhelmingly motivated by self-interest (a few more pushes and he would virtually become the film’s villain). He’s constantly contrasted negatively with Michael Maloney’s upright, honest Sir Robert Peel (one of my favourite statesmen of the 19th century so at least I’m pleased) – and his relationship with Victoria is one of self-promotion, which seems odd seeing as historically the two of them were so close.

The film introduces other villains for us to hiss at. Kretschmann and Christensen do a good job as arch political schemers. Our real villain though is Mark Strong, who does a great job of scowling, controlling nastiness as the failed-bully Sir John Conroy. Strong’s performance works so well because he makes it clear that Conroy feels that his “Kensington System” (an attempt to manipulate and cow Princess Victoria into being a submissive puppet) is genuinely in her best interest, and that he genuinely cares for her. His partnership with Miranda Richardson as Victoria’s near-love-struck mother works very well.

The Young Victoria throws in enough interesting character beats like this for it to really work as an enjoyable afternoon period-drama. With some great performances – Emily Blunt carries the movie brilliantly – and while some of the historical characterisation is a bit off, and other moments feel a little too chocolate box it’s a very entertaining, undemanding view., it’s great fun. The hardcore Victorian costume-drama fans will probably prefer Victoria for the same story in more depth – but this film does it with great sweep (and doesn’t cram in Victoria’s stupid below-stairs plotlines!).
Email ThisBlogThis!Share to TwitterShare to FacebookShare to Pinterest
Labels: British Films, Costume drama, Emily Blunt, Harriet Walter, Jean-Marc Vallée, Jesper Christensen, Jim Broadbent, Mark Strong, Michael Maloney, Miranda Richardson, Paul Bettany, Rupert Friend, Thomas Kretschmann