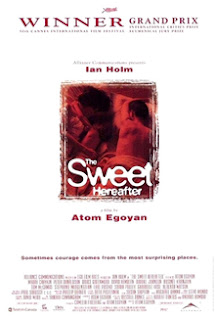 Atom Egoyan’s melancholic, wintery The Sweet Hereafter is a small-scale masterpiece about grief and mourning and the impact a calamitous accident has on a community. Told across three delicately interwoven timelines, it explores how the loss of a child can affect us and how a community can be broken apart by trauma.

In a remote Canadian town, an accident to a school bus leaves most of the town’s children killed. The only survivors are bus driver Dolores (Gabrielle Rose) and 15-year-old Nicole Burnell (Sarah Polley) who has been left paralysed from the waist. Mitchell Stephens (Ian Holm), is a lawyer looking to start a case against the bus company or the local authority or anyone else he can think of who might be to blame. Stephens himself suffers from the “loss” of his daughter, a hopeless drug addict who contacts him intermittently for money.

Egoyan’s film has a beautiful elegiac quality, the camera mixing intimate close-ups of tormented actors with sweeping vistas of snowy wilderness. The film has a medieval-style pipe score, suggesting an old medieval morality tale. Egoyan builds on this by introducing the recurring theme of the Pied Piper throughout the film – just like Hamelin, the town has lost all its children (bar one child). Nicole seems obviously the one remaining child – but is she more than that? Is Dolores or the bus the pied piper? Is it fate itself? Is Mitchell Stephens another Pied Piper, promising to solve all the town’s problems?

Either way it’s a beautifully heartfelt look at grief, loss and the impact it has on small communities. Everyone is aware of each other’s business, but this town still has secrets, from affairs to suggestions of dark family issues. But the overwhelming feeling is how grief affects us in different ways – how it turns some to depression, some to anger, some to melancholy and some to isolation. It also show how suspicion and resentment can start to bubble up and rend the community – and how finger-pointing and blame can be an inevitable consequence.

This theme is helped by the immaculate acting. There is not a false step in the entire cast. Bruce Greenwood is wonderfully bitter and deeply pained as the father who has lost both his children and his wife in quick succession and wants nothing more than to forget. Alberta Watson is lifeless and going through the motions as a mother who has lost her sole reason for living. Arsinée Khanjian burns with undirected fury at losing her beloved adopted son. The interplay between these and other characters is sublime, Egoyan asking profound questions of love and trust.

Into all this appears our lawyer. In a simply superb performance by Ian Holm, Stephens is both an ambulance chaser and also a man who seems to need this court case to fill a void within himself. Stephens skilfully adjusts his pitch for each member of the town he meets, adroitly recognising and playing on the different emotions he sees to sign them up for a group lawsuit. But how much does his daughter’s own disastrous life tie into his mantra that “someone” is always to blame, that someone has cut corners to save a buck? Does this same mantra help him to deal with his daughter’s failures – that they are not his or hers but some external force?

Stephens is the classic interloper in the town – it’s easy to see why Greenwood’s Ansell sees him as feeding off the tragedy. Holm leaves the question brilliantly open in a wonderfully subtle performance: how much does he care and how much does he want the money? He talks to the Ottos with real empathy and concern, but then runs to his car in haste to get an agreement for them to sign. Egoyan’s film asks throughout whether Stephen’s presence is, in its way, equally damaging to the town: this Pied Piper offers to take away their pain, but at what price? Will this crusade stop the town from putting the dreadful event behind them?

Interweaving timelines here work very effectively – it’s a good hour into the film before the timeline following the day of the accident finally reaches the accident itself. By this point this accident has so dominated the film that we have become all too familiar with the painful mundanity of grief and the emptiness of carrying on. Egoyan shows us the accident: but not all of it. We see it largely from Ansell’s reaction – and while we see the bus tumbling towards the frozen lake, we never see what makes it swerve. The point perhaps is to put us in the same position as the rest of the town: we can never know if it was an accident, act of God, or if someone was certainly to blame.

It’s the balance between blame and moving on that this film dwells on. The Sweet Hereafter of the film is that netherworld after loss, that “living death” of carrying on after a loved one has left forever. Any doubt that Stephens himself isn’t stuck in the same condition is dispelled in the film’s third contrasting plotline. Two years later, Stephens is a on a plane journey to collect his daughter from another treatment clinic. On the plane he finds himself by chance sitting next to his daughter’s childhood friend. The conversation between them slowly reveals more and more the immense loss, emptiness and longing for family in Stephens. How much of this feeling did he recognise in the town: and how much did his own feelings allow him to exploit the feelings of the town?

Holm is again sublime in these sequences, his eyes little pin holes of sadness, his tight-lipped firmness holding back waves of emotion. In one stand-out sequence, he tells a heart-rendering monologue of a time when his daughter as a child was bitten by a black widow spider. Rushing her to the hospital, Stephens had to keep her calm to prevent her throat swelling up, while simultaneously standing by to perform an emergency tracheotomy. The point of the story for Stephens is his own fear, and the film asks: is this fear also linked to his own regret that this was the last time he could truly keep his daughter safe? And does he also look back on it and wonder why he saved his daughter then so she could die of drug addiction today?

The other daughter in the film is Nicole, played with a mature distance by Sarah Polley. Nicole, the last surviving child, slowly turns into a pivotal figure in the film, her decisions affected by both her relationship with her father (an unsettlingly hipsterish Tom McCamus) and perhaps her wish to do what is best for the town. McCamus is equally good as a loving father whose interest in his daughter is not healthy – and it’s one of many complex questions in the film as to how far Nicole is unsettled or enamoured with his attentions.

The Sweet Hereafter is a beautifully made, wonderful film – perhaps one of the best you’ll see about small town grief and pity. It may also be one of the best acted films you’ll see – every performance is simply spot-on, heartfelt and true. It may well be Ian Holm’s finest hour, in the most complex leading role he ever got in his career. Egoyan’s emotional and heartfelt story has so much to tell you about grief and mourning that it can’t help but be a sad, melancholic, but thought-provoking and engrossing watch.
Email ThisBlogThis!Share to TwitterShare to FacebookShare to Pinterest
Labels: 1997, Alberta Watson, Atom Egoyan, Bruce Greenwood, Canadian films, Ian Holm, Literary adaptations, Maury Chaykin, Sarah Polley, Tom McCamus