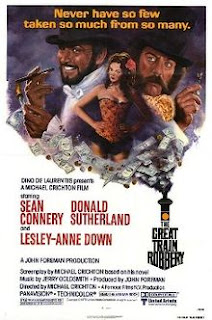 When you think about Michael Crichton, it’s easy to forget he had many more strings to his bow than just writing airport plot boilers. He created ER, he wrote and directed a number of films (most famously WestWorld) – and one of his best books is actually a piece of semi-history, The Great Train Robbery. This book – a brilliantly researched and entertaining part history, part fictionalisation – covers the story of the Great Gold Robbery of 1855, a train-based gold heist.

Crichton’s film of this book takes a slightly different tone – its realism is toned down slightly, its nose-thumbing anti-establishmentism shaved off, in favour of a lighter comic farce, a caper movie. It makes for an enjoyable movie – but it’s less interesting than the book’s documentary realism and its careful construction of the vast number of obstacles the criminals needed to ingeniously overcome.

Edward Pierce (Sean Connery) is a professional criminal who can pose as an upper-class gent. Having befriended a number of senior people from a leading city bank, he plans a daring heist on a train carrying gold from London to Dover – gold bound for the Crimean war. Pierce puts together a detailed plan – that involves gaining possession of copies of four keys essential for getting access to the safe on the train containing the gold – and recruits a team including expert locksmith and pickpocket Robert Agar (Donald Sutherland) and cunning courtesan Miriam (Lesley-Anne Down).

The First Great Train Robbery is a caper – and it has all the structure and energy you would expect. From Jerry Goldsmith’s lyrical score to the framing device that constantly returns to Pierce’s key box getting fuller and fuller (like fingers flying up when recruiting The Magnificent Seven), the whole shebang is told with real lightness. Nothing is too serious – the criminals’ actions aren’t designed to hurt anyone (apart from one of their number who turns informant) – and the overall mood is a lark, with the criminals engaging in a boys’ own adventure.

This is helped by the excellent light-comedic playing from Sean Connery and Donald Sutherland as the two main architects of the crime. Connery uses his smoothness (hiding a chippy edge) extremely well – he’s the charming man you’d want to spend time with, and he wraps you up in his own sense of fun. Any obstacles are usually met with a wry smile – like some sort of period Danny Ocean, Pierce is always one-step ahead of the game. Sutherland – with an odd, half Irish accent – makes a very good put-upon wingman, grumbling but still enjoying the ride.

Most of the rest of the cast don’t make much of an impact. Lesley Anne-Down gets some comedic business – particularly a seduction that is designed to go wrong to gain possession of a key – but not a lot else to do. Malcolm Terris and Alan Webb bluster as arrogant dupes. Robert Lang growls as an angry cop. Wayne Sleep of all people pops up as an expert burglar.

The film sweeps from set-up to set-up, very competently filmed, with some decent design and photography (it was the last film of legendary photographer Geoffrey Unsworth). Crichton is a decent director, and if some moments look a bit dated or are a little too much (some make-up for Sutherland at one point looks rubbish) it’s still pretty good.

The real problem is that you lose the sense that, by-and-large, a lot of this actually happened – I mean, sure, it was probably with less banter and jokes, but people really did a lot of this stuff. The film doesn’t always dwell enough on the problems the thieves face, and doesn’t always explain why these obstacles are so vital to overcome. It misses a trick here with its eagerness to keep barrelling forward.

What this means is that film sometimes misses the sense of triumph and satisfaction of overcoming real hurdles – or the frisson of having it clear that a lot of these were real solutions that a real person came up with. The film also rushes its final conclusions. Historically we don’t know what happened to the gold and there was a trial of some of those involved – but the film never really makes that clear. Its conclusion zeroes in again on some hi-jinks, but it doesn’t really make clear the impact, the consequences or what happened to the Macguffin at its centre. You also don’t get the sense of hypocrisy the book mines so well, with the corruption of the upper classes being glossed over by society, but the thievery of the working classes being outright condemned. I missed that a lot from the film - fun as it is.

It’s an entertaining film but, to be honest, it’s not as good as the book – which is actually really worth a read. Crichton is a man with more talent than people give him credit for.
Email ThisBlogThis!Share to TwitterShare to FacebookShare to Pinterest
Labels: 1978, Alan Webb, Andre Morell, British Films, Crime drama, Donald Sutherland, Lesley-Anne Down, Malcolm Terris, Michael Chrichton, Michael Elphick, Robert Lang, Sean Connery