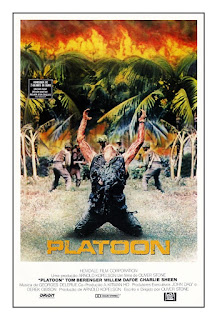 Vietnam has been a long-standing scar on the American psyche. For over 12 years, American soldiers were rolled into Vietnam to fight for something many of them were pretty unclear about. Vietnam was a bloody shadow boxing match for super powers to indirectly combat each other. American casualties were high, and the country that sees itself as championing justice and the free world ended the war with the blood of millions of Vietnamese and Cambodians on its hands. Is it any wonder the country still struggles to compute this?

Before Platoon there had been films that had dealt with the Vietnamese experience. Apocalypse Now had embraced the druggy, morally confused insanity of the war. The Deer Hunter had effectively shown the traumatic impact the war had on regular blue-collar steel-workers. But Platoon was something different. This was the war on the ground, with privates and sergeants as the focus (many of them poor, working class and also black) – the lower rungs of American society flung into a war they don’t understand, in a country they can’t recognise, fighting an enemy they have no comprehension of.

Platoon throws the audience into the visceral, cruel, terrifying horror of pointless conflict, with a feeling that the war will never end. Stone pulls off a difficult trick here: the film shows a horrifying picture of war and killing, but combines this with successfully showing the adrenalin rush that comes from conflict – and the excitement of visceral film-making.

Oliver Stone had fought as a young man in a similar unit, after dropping out of college. Chris Taylor (Charlie Sheen) is effectively a surrogate figure for the director, with the film crafted from Stone’s own experiences and those of his fellow soldiers. The film is a simple, intense experience with a straightforward plot: Taylor is torn between two potential “father figures”. One, Sgt Barnes (Tom Berenger), is a supernaturally ferocious warrior and martinet whom the men hold in awe. The other, St Elias (Willem Dafoe), is an equally fierce fighter, but also a hippy, nearly saint-like protective figure. Which of these two will Taylor side with?

Well okay it’s not a massive surprise really is it? The strength of Oliver Stone’s film is its visceral, bloody, impressive intensity. You are thrown into the midst of a series of terrible battles, interspersed with bored soldiers bickering or taking pot. At no time is the viewer (or the soldiers) given any real idea about what is going on, what the aims of the war are, what is really happening in the battles. Stone plays the film totally from the soldier’s POV. Battles are a confused mess at night. The location of the enemy is frequently unclear. There are no indications of any tactics at all. There is barely any leadership – Mark Moses’ Lt Wolfe is an almost hilariously ineffective moral weakling, who follows the leads of his sergeants. The soldiers (or rather the two sergeants) essentially operate as lone wolves, doing what they think best for any particular circumstance.

The film pivots on a confused raid on a Vietnamese village, as the platoon descends on a village for no very clear reason – apart from seemingly being pissed off that one of their number has been killed in the night. Nominally they are searching for Vietcong fighters. But really it seems like an excuse to let off steam. Platoon must have hit hard in the 1980s, as it doesn’t flinch at all from watching American soldiers committing atrocities. Women are shot, teenagers are beaten to death, a fox hole containing what looks like a child is exploded after a brief warning. The soldiers are all terrified, thrusting guns into Vietnamese faces. Above all Sgt Barnes feels no guilt at all at executing villagers in order to pressure the elders into telling what he thinks they might know about the Vietcong (who equally are largely faceless figures of terror in the distance stalking the platoon). 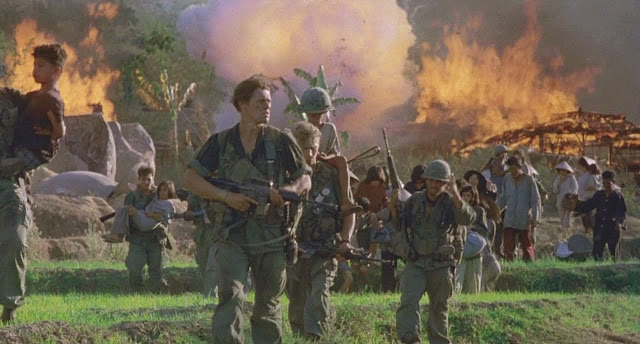 Where the film is less strong is in its plotting and narrative ideas. These are straightforward in the extreme, with Barnes and Elias almost literally as opposing devil and angel on Taylor’s shoulders. The film is clearly weighted in favour of Elias’ hippie mentality, his desire to preserve innocent lives and his caring attitude to his men. Barnes is presented far more harshly – even though his brutality stems from his own deep-rooted desire to keep his men safe, and his belief that Vietnam is hell and you can’t pussyfoot your way around hell.

Saying that, it’s hard to argue against Stone’s feelings that compromising your humanity is not worth it no matter the struggles to keep yourself and others alive. But these are (forgive me) rather obvious, even traditional points – and its part of the film being essentially a conventional morality tale with a breath-taking military setting laid over the top. The ideas in this film won’t really challenge you – and in fact the film itself is really more of an experience than something that rewards reflection.

Stone’s direction is extremely good – even though he at times falls too much into the trap of overblown, overly operatic visuals (Taylor’s final confrontation with Barnes in the forest falls heavily into this trap). Stone has never been accused of being the most subtle of directors, and there is no stone (sorry) left unturned here to get the message across. In fact Platoon frequently hits its points so hard and with such unsubtle force, that it actually leaves you very little to think about after its finished – the film does all the work for you, like an angry rant that goes into unbelievable depth of detail.

But the acting has a very healthy commitment to it. Sheen shows why he was an actor of promise before he became a self-destructing punchline. Dafoe is very good as the serene Elias – a man’s man, but one comfortable in his own skin, with a strange campness about him, whose courage extends to doing the right thing no matter what. Tom Berenger is hugely impressive as the cold-edged Barnes, who has had to stamp out his humanity to survive. The rest of the characters split into two rival camps following these different soldiers, and there are some fine performances here from some now far more recognisable actors.

Platoon was garlanded with Oscars, partly because it talked about the American experience in Vietnam in a manner (and from a perspective) that had not been addressed before. It is an important historical landmark of a film, even if it is possibly not a great film. A simple, at times less than subtle anti-war film dressed up as a war film, it will immerse you in the conflict and the horror – but I’m not sure it will give you as much to think about as it thinks it does.
Email ThisBlogThis!Share to TwitterShare to FacebookShare to Pinterest
Labels: 1986, Best Picture, Charlie Sheen, Forest Whitaker, John C. McGinley, Johnny Depp, Keith David, Kevin Dillon, Mark Moses, Oliver Stone, Tom Berenger, Vietnam war, War film, Willem Dafoe