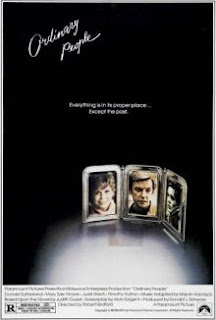 In 1980, Robert Redford became the first big Hollywood stars to parlay acting success into producing and directing small scale, independent films that otherwise might never have been made. Ordinary People was the first of these – with Redford focusing on staying behind the camera – and it was a big success. It even won four Oscars – best picture, screenplay, supporting actor for Timothy Hutton (despite the fact Hutton is really the lead) and best director for Redford himself (beating out David Lynch for The Elephant Man and Martin Scorsese for Raging Bull). It was a great story for 1980 – the matinee idol turned artist. But is Ordinary People that great a film?

The film covers the emotional collapse of a wealthy middle-class American family after the eldest son Bucky is killed in a boating accident. Younger son Conrad (Timothy Hutton) has had trouble coming to terms with the accident, which he survived, and has only just left an institution after a suicide attempt. His father Calvin (Donald Sutherland) is desperate to try and relate to his son again, while his mother Beth (Mary Taylor Moore) remains emotionally distant attempting to put the accident behind them. Conrad starts seeing psychiatrist Dr Berger (Judd Hirsch), to adjust – but the after effects of Bucky’s death continue to tear the family apart.

Nobody really talks about Ordinary People any more do they? Out of all the 1980s Best Picture winners it’s perhaps the most easy to overlook (except maybe for Terms of Endearment). Why is this? Well truth be told it’s just a pretty ordinary picture. There really isn’t much to it. The story it tells of a wealthy family (only a millionaire like Redford could consider these loaded people ordinary) suffering emotional trauma and psychiatry finding the answer has been told so many times before, and since, that there isn’t anything particularly unique or interesting about it.

In fact Ordinary People is exactly the sort of small-scale, quiet, middle-brow independent film that awards ceremonies slather over and a few years later (never mind over 30!) people struggle to see what the fuss was about. Redford directs the film with a quiet professionalism – the sort of competent craftsmanship and skill with actors that dozens of other directors could have done just as well. His Oscar for best director is especially galling when you consider the artistry and imagination of Scorsese’s direction of Raging Bull, or the unbearable sadness and tragedy Lynch gave The Elephant Man. It’s the sort of direction a non-famous director wouldn’t even have been nominated for.

This film uses shot-reverse-shot like it’s going out of fashion, most of the scenes are conversations across tables that are weighted down so heavily with meaning you start to lose interest in them. The score uses Pachelbel’s music in such an overwhelming style, it makes that sound as anodyne as much of the rest of the movie. Maybe it’s just because this is such well-trodden ground, but the revelations towards the end of the movie are so blindingly obvious you wonder why it takes so long to get to them (the son blames himself, the mother blames the son and doesn’t love him as much as the dead son, the father wants the two to kiss and make-up).

This rotates around a series of psychiatrist scenes which at least have the feeling of actual sessions, even if Judd Hirsch (good as he is here) basically plays the sort of revelation inspiring psychiatrist that only appears in movies. The film has a touching faith in the power of analysis being able to solve all problems, and spends so long luxuriating in scenes like this it virtually forgets to put actual living, breathing characters in the middle of them. With the possible exception of the father, none of these characters feel particularly real – they are just mouthpieces for the plot.

Not that it’s badly acted at all. Timothy Hutton made his film debut here and he brings a real fire and passion to the role, as well as a moving emotional vulnerability and anger directed only at himself. The supporting actor Oscar feels a bit of a cheat, as he’s clearly the lead, but he’s very good here as Conrad, struggling to express himself, bottling up his feelings and lashing out at those around him. It’s a part that feels drawn together from bits and pieces of plot requirement, but Hutton plays it to the hilt – it just doesn’t feel like a really real person, more a collection of sad traits. 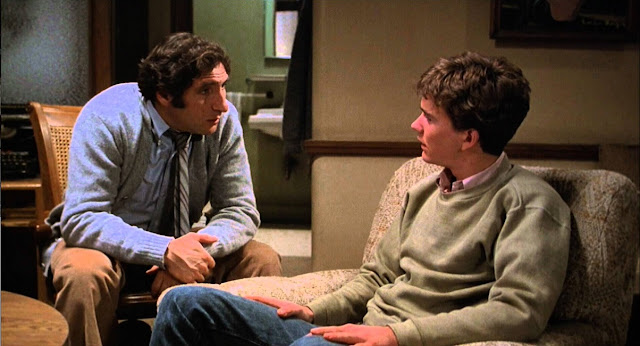 Mary Taylor Moore is in a similar situation as a mother so cold and distant from her son, so repressed and controlling her distance starts damaging the entire family. She’s unable to process what has happened so almost wants to pretend nothing has (and blames her son for not doing that same), that it again feels like something from a psychiatric case-study rather than real person. Moore gained particular attention at the time as she was best known for comedy (much like Judd Hirsch, famous for the sitcom Taxi) – so the performance at the time might have looked stronger than it actually was.

The best performance might well come from Donald Sutherland in the least flashy role as the father trying to puzzle out what is going on – and trying to work out his own feelings. It’s the only character that feels less like a construct and more a genuine person, whose answers aren’t easily worked out by a bit of psychology study. Sutherland is low-key, tender, gentle and carries all his emotion on the inside – it’s a subtle and excellent performance, overlooked way too much.

Redford essentially directed an actor’s film here (it’s all about the big moments of acting) so it’s not a surprise that it seized the attention of the Academy (largely made-up of actors) but really it’s not that far away from a well-made “movie of the week”,  with its obvious beats and not particularly surprising revelations. Perhaps it’s the point that the family’s problems seem a lot more apparent to the viewer than they do to the characters – and there is some interesting development of perceptions, not least from Sutherland’s father who starts to come to profound realisations about his wife and son.

But Ordinary People is an uninspiring and even rather tame drama, that today looks even more low-key and insubstantial. While it tries to break free from the confines of “social drama” it actually wants to tie everything up with a neat bow psychologically – and despite the fact it has an ending that suggests not everything is perfect, it really concludes with a safe full stop. There is a reason why it’s surely one of the best pictures which has been most forgotten about.
Email ThisBlogThis!Share to TwitterShare to FacebookShare to Pinterest
Labels: 1980, Best Picture, Donald Sutherland, Elizabeth McGovern, James B Sikking, Judd Hirsch, M. Emmett Walsh, Mary Taylor Moore, Psychological dramas, Robert Redford, Timothy Hutton