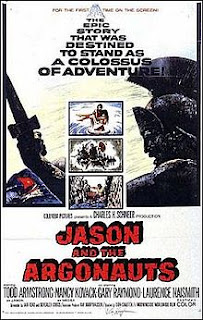 Watching this film it’s impossible not to get swept up in childish glee. It’s one of the most gloriously entertaining, wonderfully imaginative and brilliantly enjoyable films ever made. Watch this at the right age and it’s got you for life. Its best remembered of course for its wonderful Ray Harryhausen stop-motion effects – but to be honest the whole film is a brilliantly assembled package from start to finish, full of thrills and spills. I love it, I’ll always love it, and it’s got to be one of the best adventure stories ever filmed. Not much point writing more is there? But I guess I will.

The plot hews fairly closely (give and take) to the mythology. Pelias (Douglas Wilmer) seizes the Kingdom of Thessaly. Terrified of a prophecy that says a child of King Aristo of Thessaly will take the throne from him, he kills Aristo’s daughter at the temple of Hera (Honor Blackman). Outraged, Hera becomes the protector of Aristo’s surviving son Jason (Todd Armstrong), and 20 years later he returns. Jason needs to prove himself if he is to re-take the throne, and decides to find the legendary Golden Fleece in the distant land of Colchius. He builds the greatest ship ever – the Argus – and holds games to find the finest crew in Greece. But danger awaits!

If any film is associated the most with Ray Harryhausen, it’s this one. So it’s almost a shock to realise he didn’t direct it, and that the monster moments are carefully placed only at key moments – and that a lot of the rest of the film relies on human action. Jason and the Argonauts is so good because all these elements are brilliantly put together and superbly staged, with an old-school, boys-own adventurousness. How can you not enjoy this film? 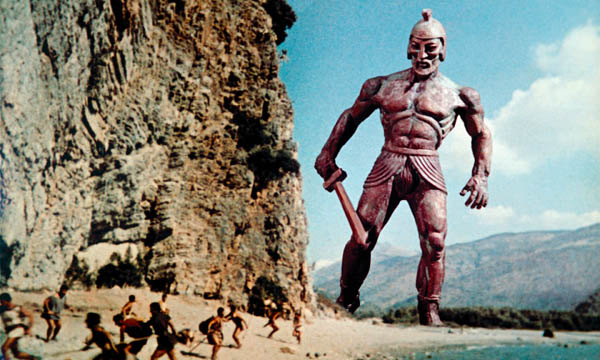 The Harryhausen effects are astonishingly good, and their stop-motion brilliance have a grounded reality to them. The staggering copper monster Talos is fabulous – grinding joints, groaning weight and size. The shrieking harpies that plague Patrick Troughton’s put-upon Phineas have an unpleasant, grasping dirtiness to them. The Hydra guarding the fleece is a rattlesnake-like vicious beast. All brilliant. I love them all – just sequences to dream of.

But the highlight is of course the skeletons’ battle. Oh wow. This sequence still holds up so well. It took Harryhausen years in the making and planning, but really paid off. The skeletons are terrifying in their cold-eyed ferocity. For skulls, Harryhausen gives their faces a lot of expressiveness. I just love this sequence – it speaks to the child in all of us. And there is something extra magical from knowing that the sequence was put together frame-by-frame and the live action shots carefully choreographed to match-up with it. Not for nothing did Tom Hanks namecheck this film when presenting Harryhausen with an honorary Oscar.

These sequences really work though because the film has a wonderful Sunday-morning-serial briskness to it. Pacily directed by Don Chaffrey, the film motors so swiftly through its plot that you are surprised to find it’s only about an hour and a half. Its story structure is not always perfect: apart from Jason and Arcastus most of the rest of the Argonauts are so briefly introduced (despite the recruitment Olympics montage at the start) you’ll find them hard to tell apart. The arc of the story is often a little messy, and iIn fact it’s easy to forget the film ends on a cliffhanger (the sequel was never made) and that Douglas Wilmer’s sinister Pelias is totally forgotten after the first half an hour. But it’s so well done it doesn’t matter.

But Chaffey keeps the events moving forward so well, the tone so perfectly balanced between heroics, gods debating and thigh slapping jokiness that the film’s tone and momentum never slackens, with the Harryhausen monster sequences as exciting tent-poles in the film’s action. A lot of this feeling is carried across from Bernard Herrmann’s excellent score, a hummable mixture of bombast and slightly eerie mysticism that reflects and compliments the action throughout.

The film is extremely well-made and put together. The Gods as these gigantic figures living in Olympus (Jason is not a lot bigger than the chess pieces they use to guide the wars of the humanity) are great fun: Niall MacGinnis is a very 1960s idea of Zeus (the gods would be hot younger guys today, not tubby Brits), but gives it a headmasterly briskness. Honor Blackman is very good as a proud but caring Hera – the use of the Argus’ headpiece as her voicepiece works really well. It’s quite something that all this interference from the Gods never feels silly at all. 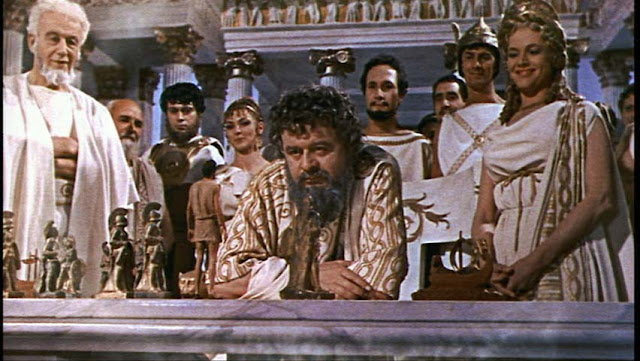 Todd Armstrong and Nancy Kovacks are, to be honest, pretty wooden as the leads but that seems to be what the film needs. Armstrong does a very neat line in middle-distance staring. Gary Raymond has a lot more fun as a scheming Arcastus. The film also manages to shuffle some perceptions: Nigel Green’s Hercules is more of a roisterer than the great warrior (and, with his meat-headed over-confidence, causes more problem for the Argonauts than most). Other performances are perfect adventure-story ham: Jack Gwillim chews the scenery outrageously as King Aeëtes, which kind of matches up with the overblown hyper-reality of the skeleton fight.

Talking about this film, it’s hard not to treat it as a sequence of scenes that I really love. But every scene in it has something. I love the moment where Hylas proves his worth via clever stone-skimming. The approach to the clashing rocks – and the intervention of Poseidon to hold the rocks apart – is brilliant. Hermes’ disguise being unveiled. Hercules doing something decent by staying behind on an island to look for a missing Hylas. All those brilliant Harryhausen sequences.

There is something about this film that is just endlessly and constantly entertaining. No matter your age, it’s a film for every single generation of children (young and old!) to enjoy. It’s simply marvellous, and Chaffey and Harryhausen deliver it wonderfully. Every scene is exciting, the pace never slackens, the special effects are brilliant. But on top of that, it’s a brilliantly put together, well directed, beautifully scored film. It’s exciting, it’s gripping, it’s wonderfully entertaining. I’m gutted they never made that sequel (although since Jason and Medea’s story is literally all down-hill from here, it’s probably just as well).
Email ThisBlogThis!Share to TwitterShare to FacebookShare to Pinterest
Labels: 1963, Action Films, Don Chaffey, Douglas Wilmer, Gary Raymond, Honor Blackman, Jack Gwillim, Laurence Naismith, Nancy Kovack, Niall MacGinnis, Nigel Green, Patrick Troughton, Ray Harryhausen, Todd Armstrong