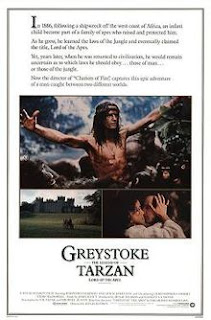 For his follow-up to Chariots of Fire, Hugh Hudson settled on this curious mess: part heavy-handed exploration of class and the brutality of man, part picturesque jungle picture with people in ape costumes. If anyone remembers Greystroke today, it’s for an interesting bit of trivia: original director and writer Robert Towne was so annoyed at being removed from the project, he used his dog’s name as his screenwriting credit. When the Oscar nominations were announced, this pooch became the first four-legged Oscar nominee. Strangely fitting for a film about the nobility of animals.

The film is a “real life” version of the Tarzan story. What this basically means is that it is dry and boring with a ponderous self-important message about how the real animal is in man (or something like that). It also of course means that the word “Tarzan” isn’t used except in the title (presumably so that audiences could be lured into the cinema). Anyway, after his parents are shipwrecked off the jungle coast, and die after young John Clayton’s (Christopher Lambert) birth, he is raised by gorillas and becomes one of the leaders of the pack. When a troupe of gung-ho explorers are slaughtered by natives, the only survivor is Belgian Fyllieppe d’Arnot (Ian Holm). Rescued by John, d’Arnot teaches him language and takes him home to the estate of his grandfather the Earl of Greystoke (Ralph Richardson), who is desperate for an heir. But can John adjust to the jungle of the modern world?

So Greystoke is well filmed, looks good and has a couple of decent performances in it. But it’s a dull mess as a film. Watching it you suspect a lot of the runtime ended up on the cutting room floor. There are sudden time jumps. Characters appear and disappear, many serving no real purpose. The film drifts towards a conclusion that neither seems enlightening nor serves any real cathartic summation of what the film might be about. There are many, many lovely shots of the jungle and Scottish countryside, but we never really end up caring about any of the characters within it.

The film is thematically a mess from start to finish. It seems to be making a point about John being totally unsuited, by his upbringing, to adjusting to the world of man. But it never really gives a proper voice to John himself. Of course he’s only just learning language, but even without that you never really feel like you begin to understand him, or get a sense of half-remembered human traits emerging from his ape upbringing. Basically you don’t get a sense of conflict within him as to whether he should stay or go. Without that conflict, there isn’t really much interest in watching him work out the answer.

This is despite the fact the Christopher Lambert is actually pretty good as John Clayton. The role plays to his strengths: it’s highly physical (not just in the acts of athleticism but also in its half-man, half-ape physicality). Lambert also has this rather fine other-worldly quality that constantly leaves him looking a bit lost and vulnerable. The part may be underwritten but he is certainly doing his very best here, and he really does a brilliant job of playing an ape trapped in man’s body.

It’s a shame that the film takes so long to get going that he doesn’t really appear for the first half an hour or so. Instead we get a lot of ape-based action in the forest – and probably too much of his parents. Later in the film, the camera makes a point of returning two or three times to a large painting of Cheryl Campbell as John’s mother – but the film never suggests any link at all between these two characters. A lot of time is wasted setting up the parents’ voyage, while at the same time no time is spent on establishing any emotional link between the Claytons and their son.

Far more time is spent on the apes – which I suppose is the point of a film that wants to celebrate the purity of the world of animals over the corruption of man. Rick Baker’s ape make-up is pretty impressive for the time – and works really well in longshot – but in close-up is all too obviously a series of performers in masks. There is a sense of their natures, but not of them as dangerous or wild animals. In fact the film goes overboard in humanising them – even to the extent of giving them their own language of grunts and groans. 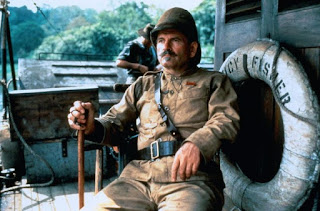 The ape stuff goes on too long – and then means the return to civilisation seems rushed and unclear. Ian Holm is excellent as d’Arnot, the bridge between the two worlds, and his fatherly love for John works extremely well. But the film makes no attempt to tackle the questions it raises of John dealing with his split animal-human relationship. Instead the film loads the decks by making almost every human character – epitomised by James Fox’s flat performance as Jane’s toff fiancée – a heartless uncaring moron.

Ah yes Jane. Played with an openness by Andie MacDowell, she’s dubbed in a painfully obvious way by an uncredited Glenn Close. This is another underwhelming relationship that seems skimmed over – one moment they have just met, the next they seem on the verge of a great love. It’s as rushed and slapdash as the introduction of a mentally handicapped servant – of course, with his childish outlook, he is closer to John than anyone could be – who literally appears out of nowhere.

The film was also Ralph Richardson’s final role – he died shortly after completing it – and his barmy Earl of Greystroke (part lonely old man, part semi-senile eccentric) does lift the film with a certain energy (he was posthumously Oscar nominated). But it’s an easy role for Richardson – and in fact his eccentric, hard-to-define energy kind of sums up the whole messy film pretty well. His character's death is the final nail in its interest, his eccentric energy sorely missed.

The most damaging thing about Greystoke is it is dull and obvious. Pretty scenery and decent performances can only cover so much when the plot is empty and predictable. The film feels cut down absurdly – half the cast of Chariots appear in roles so tiny you wonder why they bothered – and by the time the film drifts towards its conclusion you’ll probably have stopped caring about what it was all about in the first place. It tries to ask questions about man’s nature, but it doesn’t even seem to notice it never answers them. A poor film.
Email ThisBlogThis!Share to TwitterShare to FacebookShare to Pinterest
Labels: 1984, Andie MacDowell, Christopher Lambert, Hugh Hudson, Ian Charleson, Ian Holm, James Fox, John Wells, Literary adaptations, Nicholas Farrell, Nigel Davenport, Paul Geoffrey, Ralph Richardson, Richard Griffiths