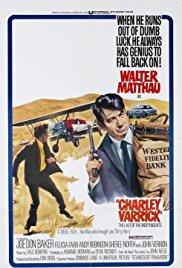 Don Siegel was perhaps the ultimate professional director, who took on any scripts that came his way, producing polished, professional films. In the later part of his career, he finally received some of the freedom to start shooting his quality B-movies on A-movie style budgets. Charley Varrick was the first film he made after his box-office smash Dirty Harry, and Siegel received more time and space to deliver a film that mixed action and drama with an elaborate, almost meditative, mystery.

Charley Varrick (Walter Matthau) is a former stunt pilot, whose small crop-dusting business is a front for carrying out small-scale robberies. A bank robbery in Tres Cruces, New Mexico goes horribly wrong – Varrick’s wife Nadine (Jacqueline Scott) is killed and he and his partner Harman Sullivan (Andy Robinson) find the small job they had anticipated is actually holding a huge amount of mafia money. Varrick knows the mafia won’t rest until they get the money back – and he is right, as bank president Maynard Boyle (John Vernon) has no choice but to call in ruthless hitman Molly (Joe Don Baker) to get the money back and kill those who stole it.

Charley Varrick was also known by Don Siegel as The Last of the Independents – and that kinda fits its tone. Varrick is a small-scale operator who has chosen crime because he’s been squeezed out of the crop-dusting business by the corporations. He’s operating a crime gang that follows a series of carefully planned robberies, aimed at stealing humble amounts: enough to be a nuisance rather than cause a genuine scandal. He’s a small-time operator, proud of who is, who doesn’t want to hit the big time but to excel as the big fish in the small pond.

The whole film reflects this personality: the film is deliberately set in a quiet American town in the mid-West – the opening credits are played over everyday scenes of small-town life. Every location is slightly run-down and unimpressive. Those wrapped up in the crime are regular Joes – on both sides of the law – and the values and principles are those of mid-west America. Even Molly the hitman – while clearly ruthless and capable of extreme violence and full of disdain of those he meets – has a drawling, cowboy quality to him.

Part of Siegel’s point is that into all this explodes a story of crime, murder and violence that all spins out of money (doesn’t it always?). The mystery element is the audience wondering how Varrick is going to get out of this with both cash and life intact. What Siegel does really well is effectively make Varrick an unreliable narrator. Despite the fact we follow him around in the film, we are never really told what he is thinking or why he does things. Only at the end of the film are all the threads of the actions he has carried out pulled together – a real lightbulb “ah ha!” moment – and the real purpose of what he has been doing is revealed.

To make a character who plays their cards so close to their chest work, you need an actor who is effortlessly charming. The film gets this in Walter Matthau. Matthau, with his hang-dog Droopy-face is hardly anyone’s first idea of a ruthless bank robber (surely part of the film’s point!) but his winning charm and kindly-Uncle quality, as well as the eye of assured cool that Matthau gives him, really make you root for him. In fact it works so well that you actually forget how ruthless Varrick in this film: from moving on swiftly from his wife’s death, to ruthlessly sacrificing several people in his quest for self-preservation. In other hands, Varrick wouldn’t half come across as a copper-bottomed shit. 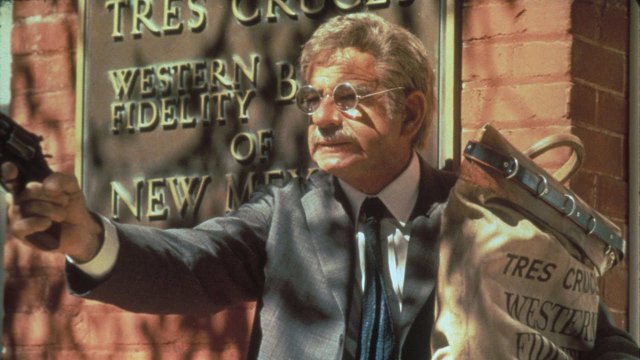 Instead, his plan of misdirection, clues pointing towards the wrong thing, and carefully juggled parallel attempts to escape (his unrevealed real plan, and the clumsy surface plan that the audience knows must be a bluff) really works to keep you engaged and entertained. Siegel is purposefully pulling the wool over your eyes in virtually every scene – and he has Varrick basically tell us he’s doing this – but there are few things that audiences like more than a magic trick. We want Varrick to pull a rabbit out of the hat at the end – to surprise us all with how clever he’s been (and to reward those who have worked out part of what he is doing).

Siegel mixes this with a surprising number of quiet, even soulful moments that mix the thoughtful with some black comedy. From Varrick’s tender kissing of his dead wife – right before he professionally carries on with their plan to burn the get-away car they escaped in (this time with his wife’s body inside it) – to a secret meeting/interrogation/intimidation of timid bank manager Harold Young (a twitchy Woodrow Parfey) by smooth big-city bank manager Boyle (a superbly cold John Vernon, nowhere near as assured and secure as he thinks he is) in a cow-filled field, these scenes are about character as much as they are about plot.

Siegel mixes this with moments of pure action and drama. The opening bank robbery is surprisingly violent, considering the gentle introduction to the film – and our “heroes” are amazingly ruthless towards those that stand in their way. Joe Don Baker’s chillingly amoral Molly hands out beatings as easily as he does slightly goofy Western smirks (a beat down of Harman is particularly brutal). Varrick is quietly ruthless and the film ends with a dynamic chase scene in a scrapyard, quite unlike anything you have ever seen.

Charley Varrick epitomises the sort of 1970s film that studios and Hollywood looked down on at the time, but inspired the filmmakers today far more than some of the Oscar winning gumph that got praised. Parts of it are dated – women in the film are either love interests or whores, and both Molly and Charley (Walter Matthau is no one’s idea of a lothario) bed compliant, impressed women in the film with an off-hand carelessness. But the core and heart of the film is in its cool, calculated confidence mixed with a sense of Western soul. With a terrific performance by Matthau, this is a fine example of independent film-making.
Email ThisBlogThis!Share to TwitterShare to FacebookShare to Pinterest
Labels: 1973, Andrew Robinson, Crime drama, Don Siegel, Felicia Farr, Joe Don Baker, John Vernon, Norman Fell, Sheree North, Walter Matthau, Westerns