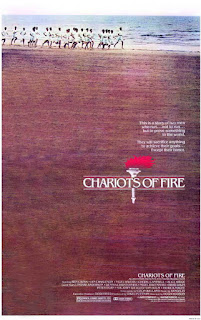 Dun-da-da-da da-da dun-da-da-Da-Da DA. Hum that theme tune and you know straight away what film it is: you can’t resist the temptation to mime out running (in slow motion of course), arms swinging gracefully from side-to-side. There aren’t many more movies with more iconic, instantly recognisable themes than Chariots of Fire.

If there is one thing everyone remembers, it’s the young athletes running along the beaches of St. Andrews, spray flying up from their bare feet. Nicholas Farrell sprinting with upper-class determination. Nigel Havers wiping spray from his face with glee. Ian Charleson full of serene joy. Ben Cross with fixed, rigid focus. The opening of Chariots is a master-class in quickly established character, tone, mood and era. The cross-fade from the funeral oration from an ageing Nigel Havers into this slow-motion, halcyon-days reflection tells you we are in the land of memory – and sets right up for the feel-good triumph the film becomes.

The film follows the key athletes of the British 1924 Olympics team. Harold Abrahams (Ben Cross) is a second-generation Jewish grammar-school boy who runs to prove he belongs and can excel. Eric Liddell (Ian Charleson) is a Presbyterian Scot, who runs to celebrate God and whose religion prevents him running in a vital Sunday qualifying heat. Both characters are, in their own ways, outsiders – and their underdog status makes them perfect to root for in this extremely well-made crowd pleaser.

Chariots is often seen as a slightly undeserving Oscar-winner. But that’s to overlook the panache it’s made with and how emotionally uplifting and engaging it is. Hugh Hudson had never directed a film before this one. His background was in commercials and he brings many of the strengths of that background to Chariots. The film is wonderfully assembled, a perfect combination of montage, cross-cutting, longer tracking shots and cross-fading.

That opening scene tells you a lot with its swift economy. But he handles others just as well: Abrahams’ 100m winning race is played first in real time, then again, cross-cut with Abrahams’ reaction to victory. The first moment is one of triumph, but the immediate repeat allows an opportunity for the viewer to understand the mixed feelings that achieving everything you aimed for can bring. Abrahams’ slightly shocked, underpowered reaction gives the slow-motion repeat of the race a hazy, post-match analysis feel – as if Abrahams is still running the race in his mind. As if he knows that his whole life was building to that one moment, and now he needs to find a new focus. 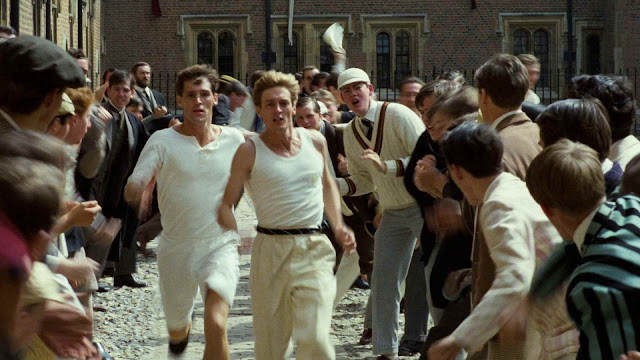 Hudson’s mastery of moments like this is impressive. Sequences are fabulously assembled. The famous “one minute” dash around the Trinity court (actually Eton) is brilliant, and a great example of how the film sells tent-pole moments. It also masters quieter character moments. One of its stand-out moments simply allows Abrahams’ coach Mussabini (a scene-stealing Ian Holm) to react to Abrahams win (a victory he has not seen due to being banned from the stadium) by quietly rising to attention, then sitting on his bed, gleefully punching through his hat and quietly whispering “my son”. Other scenes – such as those where Abrahams confronts quiet anti-Semitism from Cambridge scholars (nice bitchy cameos from John Gielgud and famed director Lindsay Anderson), or Liddell is quietly pressured into running on Sunday – simmer with good acting and restrained direction.

It’s these scenes that really make the film work. Ben Cross is superb as a chippy, frustrated Abrahams who feels he must justify his place in England’s oppressive class system. He’s constantly glowering, tense and uncertain – but Cross mixes this with a boyish charm, a gentleness (most notably in his shy romance with an unrecognisable Alice Krige) – and a warmth and genuineness that he shows with friends. Nicholas Farrell’s boyish Aubrey Montague (a love-struck best friend if ever I saw one!) helps a lot here – if someone as obviously nice as him likes Abrahams, then gosh darn it we should as well. 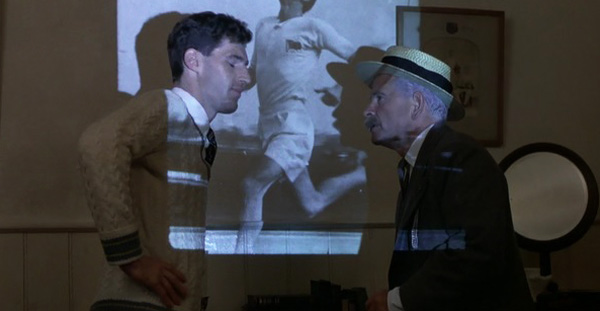 Ian Charleson is equally impressive as the devout, charming but coolly determined Eric Liddell who has decided his course in life and nothing is going to shake him from it. The film has a refreshingly considerate view of Liddell’s Christianity – and, furthermore, praises him for sticking to his devout principles. Charleson wrote many of his speeches himself, and he brings a charming honesty to his character. How can you not love this guy? He’s the perfect ambassador for the Church.

The film tackles plenty of clashes for Liddell which sizzle in a quiet way. Cheryl Campbell is very good as his partly proud, partly concerned sister, worried that his missionary work is being sacrificed for his running. His confrontation with the Olympic committee over his crucial decision not to run – is there any other film where not working on a Sunday is the dramatic centre piece? – is nicely underplayed. It’s clear that they (including a very good Nigel Davenport as an understanding Chair) want him to run, and it’s equally clear Liddell is determined he won’t.

It’s the moments like this that make the film so triumphantly feel-good. Both Abrahams and Liddell are at heart immensely likeable, the upper classes and elites who frown at them in their way rather boo-able. The running scenes are great (despite the sweetly dated lack of grace!), the film really capturing the exhilarating energy of pushing yourself to the limit. Watching Abrahams training under the expert eyes of Mussabini (worth repeating again that Holm is the heart of this film, as the fatherly, wise trainer struggling against prejudice against both Italians and professionalism), or Liddell winning from behind after being pushed over in a race are simply hugely uplifting.

Strangely the one thing that does seem a little odd today is the Vangelis score. Yes the Chariots march is outstanding – but the 80s electronic beat to the rest of the score now sounds very dated. Yes it is interesting to overlay (then) modern music over a period piece – but nothing dates quicker than music (except perhaps haircuts) and that is the case here. It sounds odd and jarring with the action at times – but then that main theme is so brilliant (but also the most classical of Vangelis’ compositions) that it still sort of works. 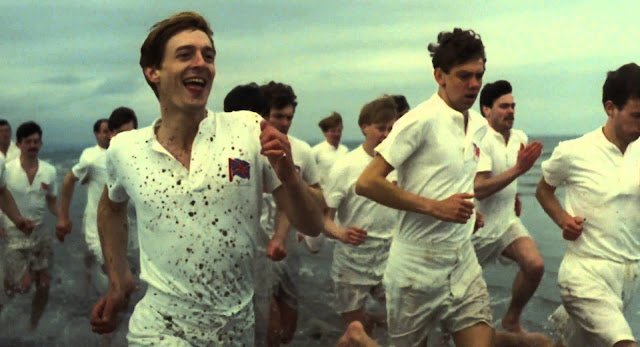 The sad thing is that Chariots didn’t lead to great new things for most involved. When he won the Oscar for best original screenplay, Colin Welland famously cried “the British are coming!”. Sadly he wasn’t really right. Within four years two flop films had all but ended Hudson’s career. Producer David Puttnam took over Columbia Pictures, only to be dismissed within a year after disastrous results. Many of the stars of the film never got the breaks this film promised (Charleson died tragically young – the first major star in England to openly acknowledge his cause of death as AIDS). Even the star Americans introduced to play the yank athletes (Brad Davis and Dennis Christopher) never had a hit film again. As David Thomson put it, within ten years of all the major players only Ian Holm “had any professional credibility left”.

But Chariots is still a bit of lightening caught in a bottle. A strange idea to spin an entire film out of an event lasting less than 10 seconds, but which married up so well with universal themes of class and struggle. It knows exactly what it is, and exactly what it is doing. It really worked then and it really works now. It’s not pretending to be high art, or to really make profound statements – just to entertain. And it really does. Fetch your running shoes and start that Vangelis theme!
Email ThisBlogThis!Share to TwitterShare to FacebookShare to Pinterest
Labels: 1981, Alice Krige, Ben Cross, Best Picture, Brad Davis, British Films, Hugh Hudson, Ian Charleson, Ian Holm, John Gielgud, Lindsay Anderson, Nicholas Farrell, Nigel Davenport, Nigel Havers, Sports films