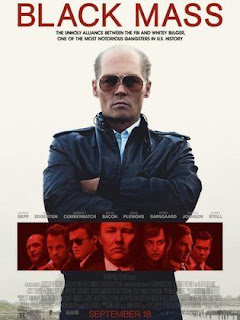 Well Goodfellas casts a long shadow doesn’t it? Certainly long enough to completely drown Black Mass which, despite some good acting and period detail, never really comes together into something compelling or engrossing or even really that interesting. But you’ve got to admire how often Scott Cooper must have watched Scorsese’s classic. Shame he didn’t bring anything new to the table.

In South Boston in the mid-1970s, James “Whitey” Bulger (Johnny Depp) controls organised crime. With his rule under challenge from rival gangs, Bulger turns informer to the FBI – specifically agent and childhood friend John Connolly (Joel Edgerton) – offering information on his rivals in return for being allowed to take over their business. Inevitably, Bulger exploits the relationship for his own gain – with the increasingly blind-eye of Connolly who becomes more and more embroiled in the underworld.

So there are good things in this. The period detail is pretty good. There are plenty of good gangster moments, even if they’re the reheated leftovers from everything from The Sopranos to Goodfellas. The low-level gangsters we follow have a slightly different perspective – even if most of their characters are completely interchangeable. It’s interesting that Bulger moved in such legitimate circles as the FBI and his State Senate President brother (well played by Benedict Cumberbatch). But the film never really makes this come together to mean anything. You don’t learn anything, you don’t understand anything new – it’s just a series of events.

That’s despite, to be fair, a very good performance by Johnny Depp. Sure the part caters to Depp’s Olivier-like love of the dressing-up box – here he sports bad teeth, a bald patch, a paunch and a pair of searing bright-blue contacts that make him look like a Muppet demon – but for all that, he is very good. His natural presence works to make Bulger a leader and he has a swaggering, dry, cruel quality to him that never makes him anything less than unsettling. He also conveys the monstrous moral blankness behind Bulger, using a fig-leaf of loyalty to cover his destruction.

It’s a shame then that he’s not really given anything to do. Too much of the part is reminiscent of other things: from Jack Nicholson in The Departed (to be fair, Bulger was the inspiration for that character), to Joe Pesci’s “Do I amuse you?” speech or his insanity from Casino. Montages as tired as a sleepless night run through the collection of funds and the beating of rivals. It’s just all so predictable. It’s a box ticking exercise. Yawn.

The biggest shame is that, in Connolly, the film has a far more interesting potential lead character. Imagine it repositioned to follow him instead: the semi-chancer, semi-star-struck kid swept up in the glamour of crime. So much more interesting. How far did he turn a blind eye? How far was he essentially an accomplice? Did he feel or know he was doing the wrong thing? Consider Depp’s brilliance in Donnie Brasco and then imagine what he could have made of this Faustian figure: and what an interesting film we could have had.

Instead, good as Edgerton is, the film barely scrapes the surface of his thoughts or motivations. We get beats – and his wife (excellently played by Julianne Nicholson) is clearly disgusted by his gangster friends – but it constantly falls flat as we keep pulling back to Bulger, or internal FBI arguments that tell us nothing. On top of this Bulger’s empire is ham-fistedly explained: it’s never clear what his reach is, what his main crimes are or what his aims are. We see killings but don’t often know why – and a sequence in Miami is so poorly explained I still don’t know what it was about.

The film introduces Bulger’s lieutenants – but reduces them to identikit hangers on. All the flash-back retrospective confessions (a framing device the film uses to very mixed effect) in the world can’t turn them into characters. Even Bulger’s relationship with his patrician brother gets lost in the shuffle – again a film focused on a crime lord and his State Senator brother would have been more interesting.

Black Mass is well made – but its problem is that there is on the edges a far more interesting film that never comes into focus. If they had chosen a different focus we could have had a film worth watching. Instead, like Connolly, the film is seduced away by the dark soul of Bulger. Depp is great – but the film is so in love with him and his transformation that it becomes something completely forgettable.
Email ThisBlogThis!Share to TwitterShare to FacebookShare to Pinterest
Labels: 2015, Benedict Cumberbatch, Corey Stoll, Dakota Johnson, Gangster films, Jesse Plemons, Joel Edgerton, Johnny Depp, Julianne Nicholson, Kevin Bacon, Peter Sarsgaard, Rory Cochrane, Scott Cooper, W. Earl Brown