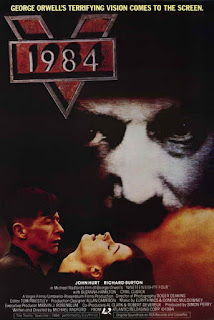 Few novels of the 20th century have had such a far-ranging impact as George Orwell’s 1984. Its concepts and ideas have dominated the popular language around topics from politics to reality television. Orwell’s idea of a dystopia, ruled by a controlling government, has inspired virtually every other story in a similar setting since. Hell, Orwellian is now an actual word.

Michael Radford had dreamed for years of bringing a film version of Orwell’s last masterpiece to the screen. This film is the end-result, shot (as it proudly announces at the end) in the exact times and locations the original novel was set in. Radford has created a hugely faithful adaptation that strains at the leash to cover all the complex political, philosophical and personal questions Orwell’s novel explores. From the opening sequence, expertly recreating the books “Two-minute-hate”, it’s immediately clear that Radford knows (and loves) this book.

Winston Smith (John Hurt) is a party worker in Oceania (a sort of super country consisting of North America, Britain and Ireland), whose role is to edit and adjust the historical records to ensure that everything the ruling Party has ever said was always accurate and correct. Unpeople are removed from old newspaper cuttings, economic targets are edited to match the final results. In his heart he has sincere doubts about the system and yearns for freedom – but it is not until a chance meeting with Julia (Suzanna Hamilton) that he finds a way to express his individuality through their love affair. But what does Inner Party member O’Brien (Richard Burton) have planned for him?

Radford’s film is a marvel of design. Its look and feel could have been ripped from the pages of Orwell. Today we’d call it almost steam-punk – every piece of technology is made of antiquated and repurposed pieces of equipment (such as phone dials or computer screens) that have a rusty, poorly maintained feeling that immediately communicates the run-down crapsack world the film is set in. Every building seems to be crumbling, collapsing, poorly made, unpleasant, dirty – every street is littered with wreckage. Who on earth would want to live anywhere like this? 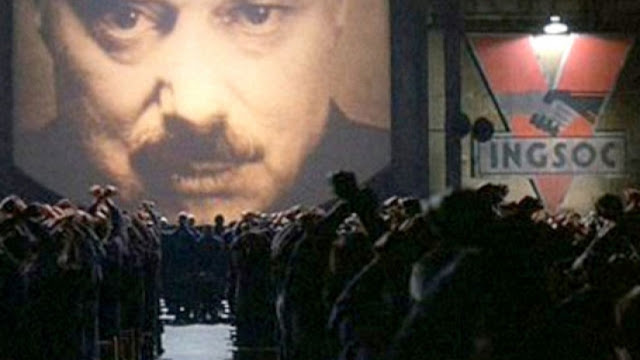 The oppression of the design – all dark blues, greys, blacks and crumbling stone and rusty metal – is contrasted at key points. The (relative) opulence of O’Brien’s apartment – with actual comfortable chairs, plastered and painted walls and decent furniture – really stands out (as does Burton’s well-tailored boiler suit compared to the uncomfortable rags of the others). Roger Deakin’s photography also really mixes up the grime of London with the sweeping vistas of the countryside, the only place we see greens or brighter blues.
Radford’s adaptation of the novel manages to hit every beat from the original. I’m not sure if it is quite accessible to someone who hasn’t read the novel: there is a lot of information only briefly communicated here, and the film makes no real effort to set up or establish the situation in Oceania. Some moments work a lot better if you know the book – the nature of Winston’s job most especially. However, Radford really captures the spirit of the original – and he really understands the contrasts in the book between its gloom and oppression and the free spirit of Julia, and what their love affair represents to Winston.

The film contains a lot of nudity in these scenes (Suzanna Hamilton does full frontal several times –John Hurt’s bottom similarly appears a fair bit) – but it’s kind of vital. The characters are literally (and figuratively) laying themselves bare. It’s a clear visual sign of how they are rejecting the rules, systems and crushing control of the state itself. Alone they can shed the burden of being controlled and truly be themselves. It’s one of the few films where extensive nudity actually feels completely essential to the plot – and vital to communicating the character’s desire for openness. 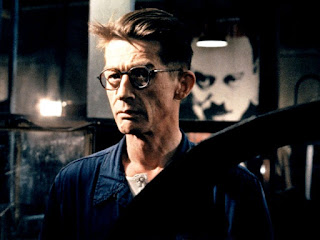 Radford also draws some neat (inferred) visual parallels from the material of the book, most notably around Winston’s fear of rats. In the book, this visceral fear is never fully explored, but here in the film Radford has Winston plagued with dreams and flashbacks of stealing chocolate as a child from his starving mother – and returning to an empty room full of rats. Rats are linked in Winston’s mind with betrayal and inhumanity, the very qualities he most fears in the real world – and the impact of these animals psychologically on Winston seems all the more clear.

The film is further helped by the casting of John Hurt as Winston Smith. If ever an actor was born to play this role, it was John Hurt. Not only does Hunt’s gaunt face, emaciated frame and pale cragginess fit perfectly (he also looks a lot like Orwell), but Hurt’s gift as an actor was his empathy for suffering. His finest parts were people who undergo great loss and torment, so Winston Smith was perfect. He gives the role a great deal of damaged humanity, a naïve dream-like yearning, a desire for something he can barely understand. There’s a real gentleness to him, a vulnerability – and it makes Winston Smith hugely moving. 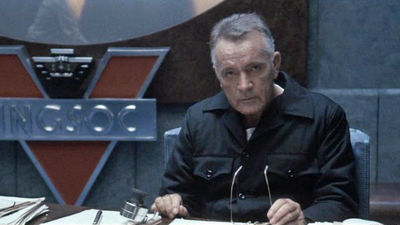 Suzanna Hamilton (in a break-out role) is a great contrast, as a confident, controlled, brave Julia – again there is something tomboyish about her that really works for the part. She’s both certain about what she is doing, but also unwise and naïve. It’s a shame her performance often gets overlooked behind Hurt and Richard Burton. This was Burton’s final film – and while he clearly looks frail, he gives O’Brien all the imposing authority of the melodious voice: you could believe Burton as both a secret rebel and as the face of the state. He’s really good here, hugely menacing and sinister.

1984 is perhaps one of the most faithful and lovingly assembled tributes to its source material you can imagine. In fact that’s the root of its two biggest flaws. Radford had an electronic score by the Eurythmics imposed upon the film (the band was unaware that Dominic Muldowney had spent almost a year working on a score rejected by the producers). This electronic, slightly popish soundtrack feels completely out of whack with the tone and style of the rest of the film. It’s very 1980s electronic tone doesn’t match the novel and it looks even worse today. That’s the danger when your passion project can only get finance from a record company! 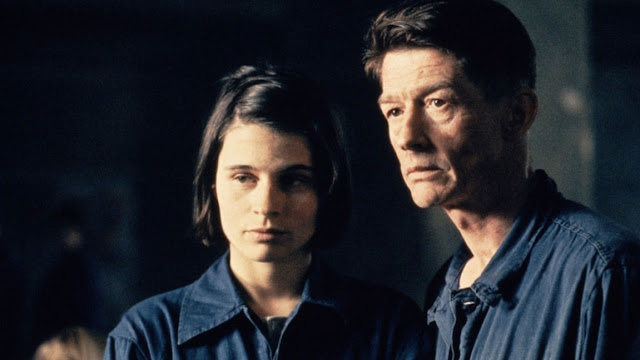 The other problem is the film is very much an adaptation: wonderfully done, brilliantly designed and acted, but it exists best as a companion piece. In fact the full enjoyment of the film pretty much relies on having read the book – and it has virtually no appeal to someone who didn’t already know the book (even the 2-minute hate that opens the film isn’t explained). Historically I think the film is very easy to overlook as it came out at a very similar time to Terry Gilliam’s Brazil. Brazil doesn’t adapt the plot of Orwell’s book – but in all other senses it’s an adaptation of the heart of that novel, told with greater artistry and imagination than here. It’s a thematic adaptation that is its own beast not just a page-to-screen version. That’s what 1984 is and, however well done, it will always be in the shadow of the original.

Radford’s labour of love is still a very good film. Somehow what was pretty bleak on the page is even more traumatising on screen. A lot of this is due to Radford’s balance between oppression and freedom, and the film’s perfect adaptation of the book’s themes. But a lot of it is due to Hurt’s heartfelt, sympathetic and perfect performance in the lead role. Literally no-one else could have played this role: and from the opening shots of him at a party rally, through scenes of love, torture and traumatised aftermath, he’s simply wonderful. Read the book: but once you do enjoy (if you can!) the film.
Email ThisBlogThis!Share to TwitterShare to FacebookShare to Pinterest
Labels: 1984, Cyril Cusack, Dystopia, Gregor Fisher, John Hurt, Literary adaptations, Michael Radford, Phyllis Logan, Richard Burton, Science fiction, Suzanna Hamilton